Note to self: Remember to hit “Publish”

I stumbled across an interesting article on BBC the other day, and wanted to share.

How a razor revolutionised the way we pay for stuff

In short it describes how the safety razor with replaceable blades – the original Gillette blades were meant to be traded in so they could be resharpened at the factory – gave rise to what is known as two-part pricing; ie.: making us pay once for the razor, and then make us keep paying for the blades.

Sometimes I’m simply not able to shave… lack of time and bathroom – or even running water.
But it’s amazing how much more human I feel after washing my face with a wet wipe and putting aftershave and beard oil on. I might not be clean nor shaven, but I smell clean and shaven – and that lifts the spirit. 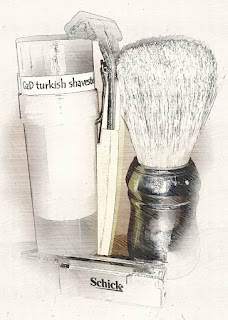 Quite a long time ago – well, before mid May 2012 at least – I picked up a couple of cheap and cheerful “horse hair” brushes from a Turkish online shave shop. About one year later I PIFed the No6 to a new wetshaver and got myself the “new and improved No6“. Since then both the new No6 and the No7 have been in my rotation, and given great service despite costing about the same as a small cup of coffee each.

I have however decided to retire both… the No7 is starting to develop a bit of a gape in the middle (I’ve been accused of abusing my brushes; I twist and swirl in the soaps), and even if the No6 haven’t I feel that it has served well and deserves a rest – in part since I got plenty of other brushes I can use, and want to use. 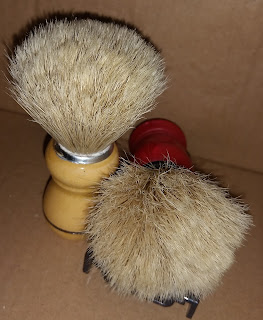 So like my Yuma which I retired earlier this year, these will go on the shelf for now… perhaps to be taken down at some point for old times sake.

Like the YUMA these brushes prove that when it comes to traditional wetshaving, inexpensive don’t mean it’s not good enough. And for a beginner – as I was when I bought these – inexpensive can be a lot more gentle on both the wallet and the mindset of the shaver.

…is a subject I touched upon before – as well as mentioned in passing in regards to a disposable shaving brush – but I found a recent article discussing the same thing.

Given that the latest article focuses on a ‘mere’ 200 cases in the US and the UK, and there were literally millions of soldiers and civilians shaving daily… I think the whole anthrax scare was little more than a scare overall; serious for the people who contracted the disease, but a rather minute risk if the manufacturers of shaving brushes had taken a tiny bit of care in the manufacture.

Key take away? You might want to be wary of old shaving brushes, but there is plenty of other things that are more likely to make 100 year old brushes dangerous to use… 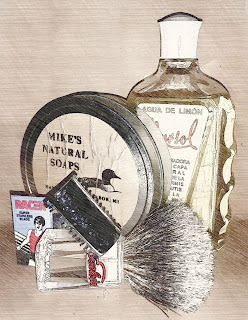