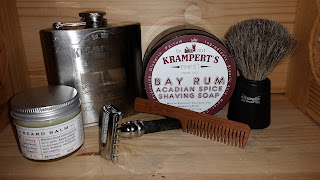 As I was stumbling across the Internet, I found an article over on the Sharpologist written a couple of years ago: a financial faceoff. It’s a decent read, even if several assumptions are made along the way I find myself not agreeing with all the way – YMMV.

Unsurprisingly, DE’s (and one has to assume, SE’s) are much cheaper to use then either cartridges or disposables. What did surprise me was the claim that DE’s are a quarter of the cost – I had assumed it would be even less (ignoring any Acquisition Disorder you might have picked up along the way, off course). 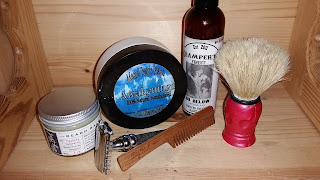 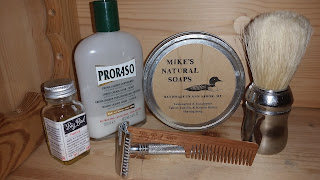 Every man remembers his first shave, according to the internet…

I do remember my first shave with a traditional safety razor though, and how my face looked afterwards… was hooked right away, despite several nicks. Thinking about it, I do believe my first shaves as a pimply teen was with an unremarkable electric razor… a no-brand rotary. First experiments with carts and canned goo came a little later as I was gearing up for boot camp – I believe my logic was that you can’t find an outlet while on exercise in the deep forests. The main takeaway from the first few years was that I dislike canned goo; left my face feeling dry and funky.

Enter stage right; a cheap brush and cream from BodyShop. Much better, even if ingrown hairs and shaving rash still plagued me.. at the time I though that was just how it was.

Over the next couple of decades I waffled between carts (Sensor Excel), various electrics, and growing beards… until I was pointed in the direction of traditional wetshaving while I was gearing up for a one year Tour of Duty as a UN Military Observer in Africa – the logic at the time being that you can’t always find an electrical outlet nor reliable buy carts while in a third world country… seems to be a common theme with why I switched to a cart years before.

The anticipation when I slid the Feather blade into my Parker R22 and slowly twisted is closed was palatable… and I promptly opened and closed it a few times to make 100% absolutely sure I had put it in right. I was happy with the lather I had made with my brand new Omega boar brush and my just as new tube of Proraso Green… even if looking back it was frankly not particularly good. And the less I say about my pre-shave, the better… because there is not much to say about splashing some warm water on ones face.

The feeling of sliding a traditional safety razor over my cheeks for the first time? Unforgettable. The actual sound of stubble being sliced through by a piece of wicked sharp steel? Simply wonderful.

Yes, there was several nicks. Blood was drawn. The Feather is, in hindsight, way to sharp for an aggressive razor like the R22. My lather was too watery and provided little cushion. But despite all that I knew one thing for sure when I rinsed the bright red remains of watery lather of my face:

I wanted more. Much more.

To roll back, I think my first shave was forgotten because it wasn’t anything special. I do remember my first traditional shave because it was quite simply unforgettable. 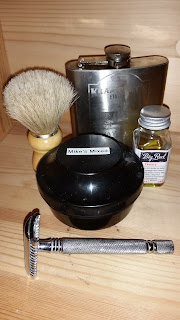 Apparently there is an app for everything these days – I’ve deceided to test out once that promises to make it easier to keep track of my gear, add notes, compare shaves and apperantly also makes it easier to share a SOTD.

Stay tuned – the free version only lets you keep track of a limitet number of items in each category (razors, brushes, blades, soaps, aftershaves and other stuff), so I might have to go premium. 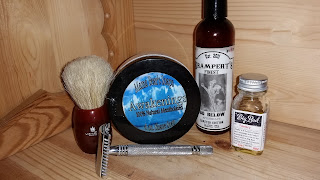 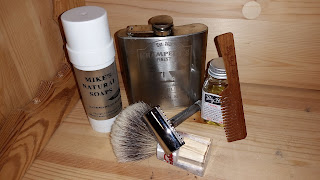 Shaving is a way to start the workday by ritually not cutting your throat when you’ve the chance.