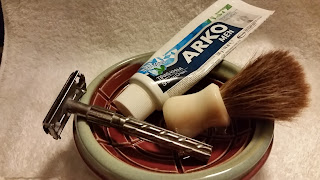 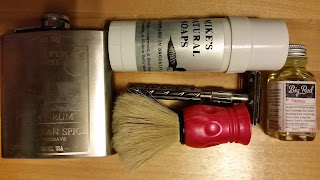 From Shaving Made Easy, a book in the public domain I like to recommend to shavers new and old:

To make the lather, see that the soap is placed in the cup according to previous directions. Fill the cup with water, allowing it to stand for a few seconds, then pour the water out. Usually sufficient water to make the lather will adhere to the cup, soap and brush. Now with the brush, mix thoroughly, using a combined stirring and churning motion, until a good thick lather appears. The more the brush is rubbed over the soap the thicker the lather becomes. A great deal depends upon having the lather just right. If it is thin and watery, you will have poor success in shaving. The more creamy it is, the better will be the effect of the alkali in stiffening the beard. Some of the poorer qualities of soap produce lather very quickly, sometimes half filling the cup, but it will be found thin and without lasting qualities, so that by the time one side of the face has been shaved, the lather is all gone from the other. A good soap will produce a thick creamy lather that will last throughout the entire process of shaving.
Applying the Lather.
Put the lather on with the brush, covering every part of the face that you intend to shave. Then with the fingers rub it thoroughly into the beard until the lather has had sufficient time to stiffen the hairs. Next to having the razor in perfect condition, this is the most important thing to do; for it is impossible to shave easily unless the face is well lathered and the lather thoroughly worked into the beard. Go over the face once more with the brush, in order to spread the lather evenly, and then begin shaving at once, before the lather has time to dry. Should it dry while you are shaving, wet the brush slightly and apply fresh lather. If you prepare your face in accordance with these instructions, a keen razor will slip over the face so easily that shaving will become a real pleasure.

Just another thing I stumbled over in my online wanderings – the tiniest travel razor I’ve seen so far.

I’ve found very little about it – patented May 11, 1921, made in the US, manufacturers logo is BP in a diamond. Reportedly it’s a smooth razor, although challenging when shaving the ‘off side’ of the face.

One of the fellows over on my favourite shave forum found this YouTube video of it in use:

Do I want one? Yes I do – but I have no idea where to find one for a reasonable pile of cash… 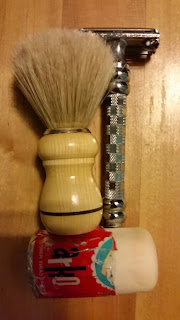 From Shaving Made Easy, a book in the public domain I like to recommend to shavers new and old:

Next to the razor, the most important article of the shaving outfit is the soap. In its proper use lies the real secret of easy shaving. The razor may be ever so good, but unless the beard is properly lathered with a good soap, shaving will be anything but a pleasure. Use only a regular recognized standard make of shaving soap, not, under any circumstances, a toilet soap. The latter is not intended for shaving, and is likely to produce irritations of the skin and leave the face rough and sore.
A wrong idea prevails regarding the use of the soap. The popular impression is that the soap is used for the purpose of softening the beard, in which condition it is supposed to be most easily cut. This is a mistake. The soap is used, not to soften the beard, but to produce exactly the opposite effect—namely, to make the hair stiff and brittle, so that they will present a firm and resisting surface to the razor. A hair, as is well known, is a tube composed of a hard fibrous substance, growing from a bulb or root, which secretes an oily matter. This oil works its way up through the hair, and by permeating all parts, renders the hair soft and pliable. Now in this natural oily condition, it is very difficult to cut the hair with a razor, and it becomes even more difficult if the beard be made still softer by the application of hot water. Many do this, and it is no wonder they find shaving difficult. When this is done, the hairs become soft and limp, and the razor will either slip over them entirely, or else cut partly into them, bend them back and slice them lengthwise, all the while pulling and straining them at the roots, and making the process of shaving most painful. Now soap has the opposite effect. It contains either alkali, potash or soda, which when applied to the beard in the form of lather, unites with the oil of the hair, neutralizing it and removing it, and renders the hairs hard stiff and brittle—in which condition they may be easily and readily cut. For the sake of cleanliness, the face should, of course, be washed previous to shaving in order to remove any dirt or grit from the beard, which might dull the razor; but before applying the lather, the face should be well dried with a towel. 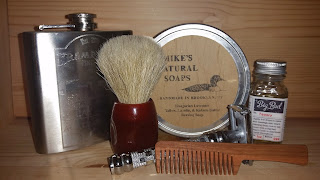