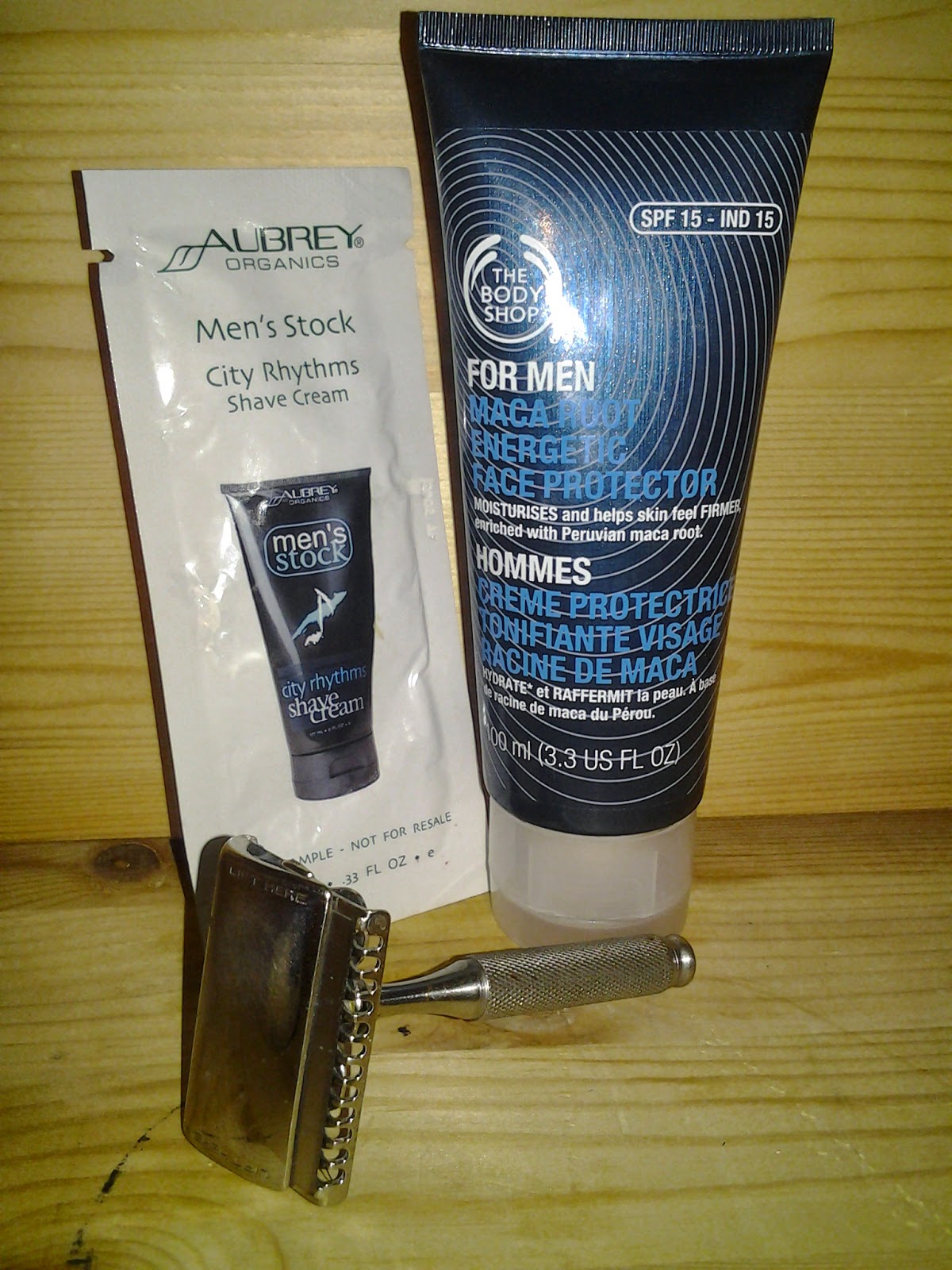 The principal object of our invention is to provide a shaving brush having a hollow handle with cream dispensing means therein so constructed to t directly inside a tube of shaving cream inserted in the handle, whereby to dispense the cream therefrom, or operate simply inside the handle when the same is filled with cream, as by emptying a tube therein. This makes the brush independent of use with any particular sized tube, and the user can employ his favorite cream without regard to the size of tube. 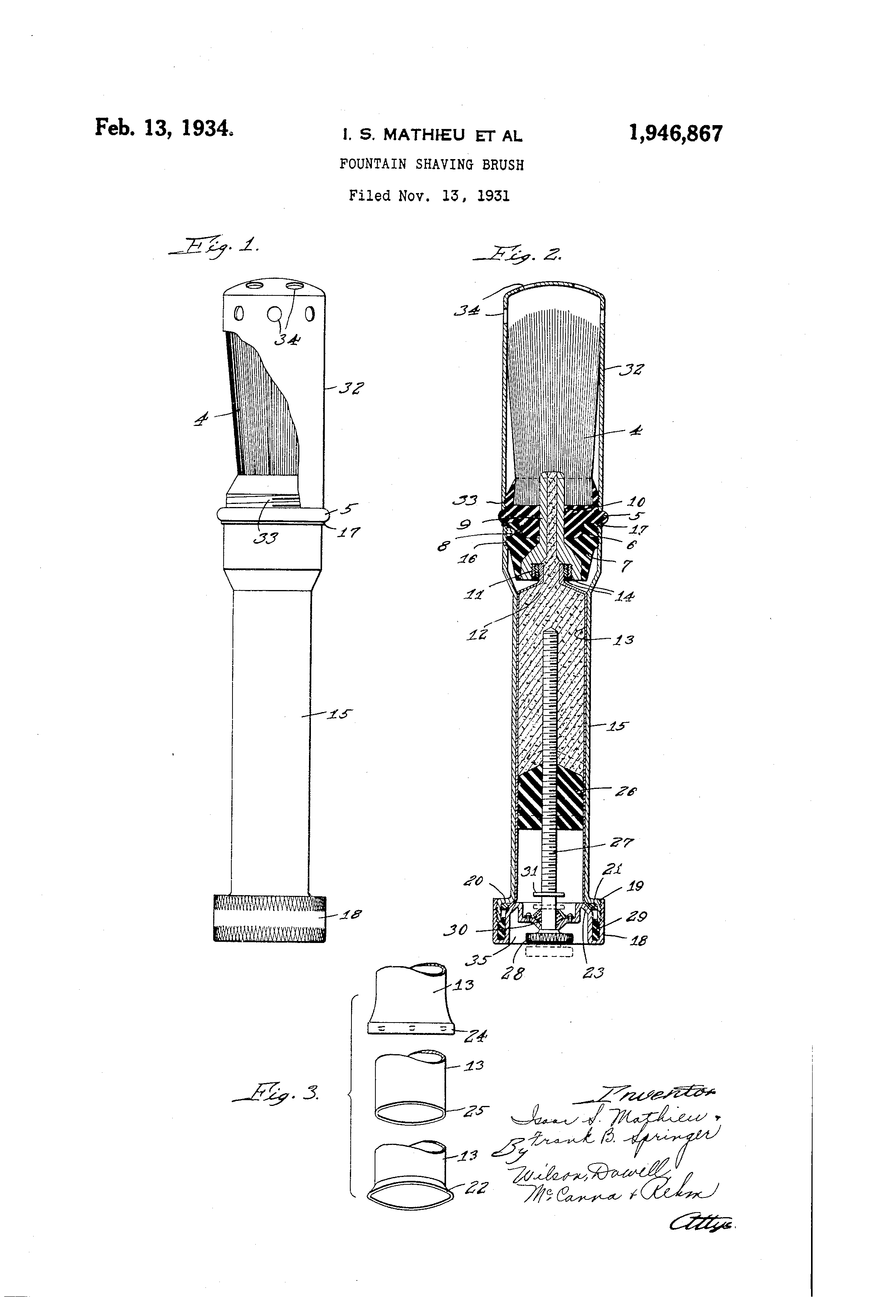 Judging by the drawing, it’s a shaving cream syringe attached to a brush…  would make for an awesome travel brush, if anyone feels like setting up a production line. 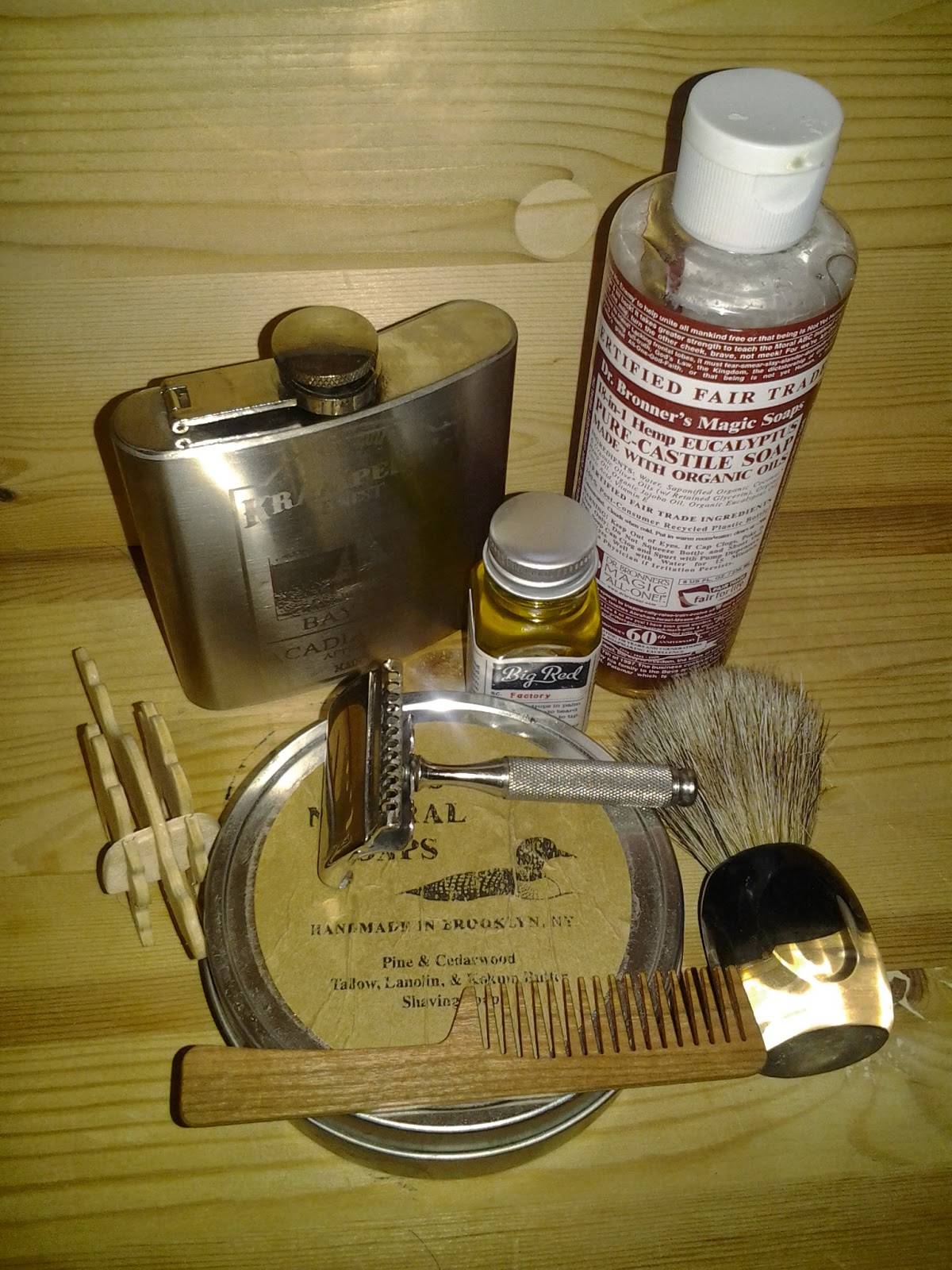 Thanks to a generous member over at my favourite shave forum, I have been PIFed a Philips Philite razor.

A bit of background first; Philips started making bakelite object in 1923, but since the word Bakelite was a protected trademark, they had to call it something different. Philite was the name they came up with, which to me sound rather uninspired… than again, different times. Interestingly, while ‘standard’ Bakelite is a combination of phenol, formaldehyde, and filler (wood flour), the Philips variation also contains urea – I’m not sure if this was to avoid patent infringement or because it had a real purpose in moulding or curing the plastic. There is some indications here and there on the web that Philite could be used in larger moulds than regular Bakelite, but that might just be hearsay or marketing claims.

The addition of urea may explain the slightly pitted surface though – but I’m not familiar enough old bakelite to know how pitted they usually should be… after all, the Philips Philite razor went out of production around the time of the War – World War II that is. So mine is at least 70 years old, quite possible 75 to 85 years old – a respectable age indeed for a plastic product. 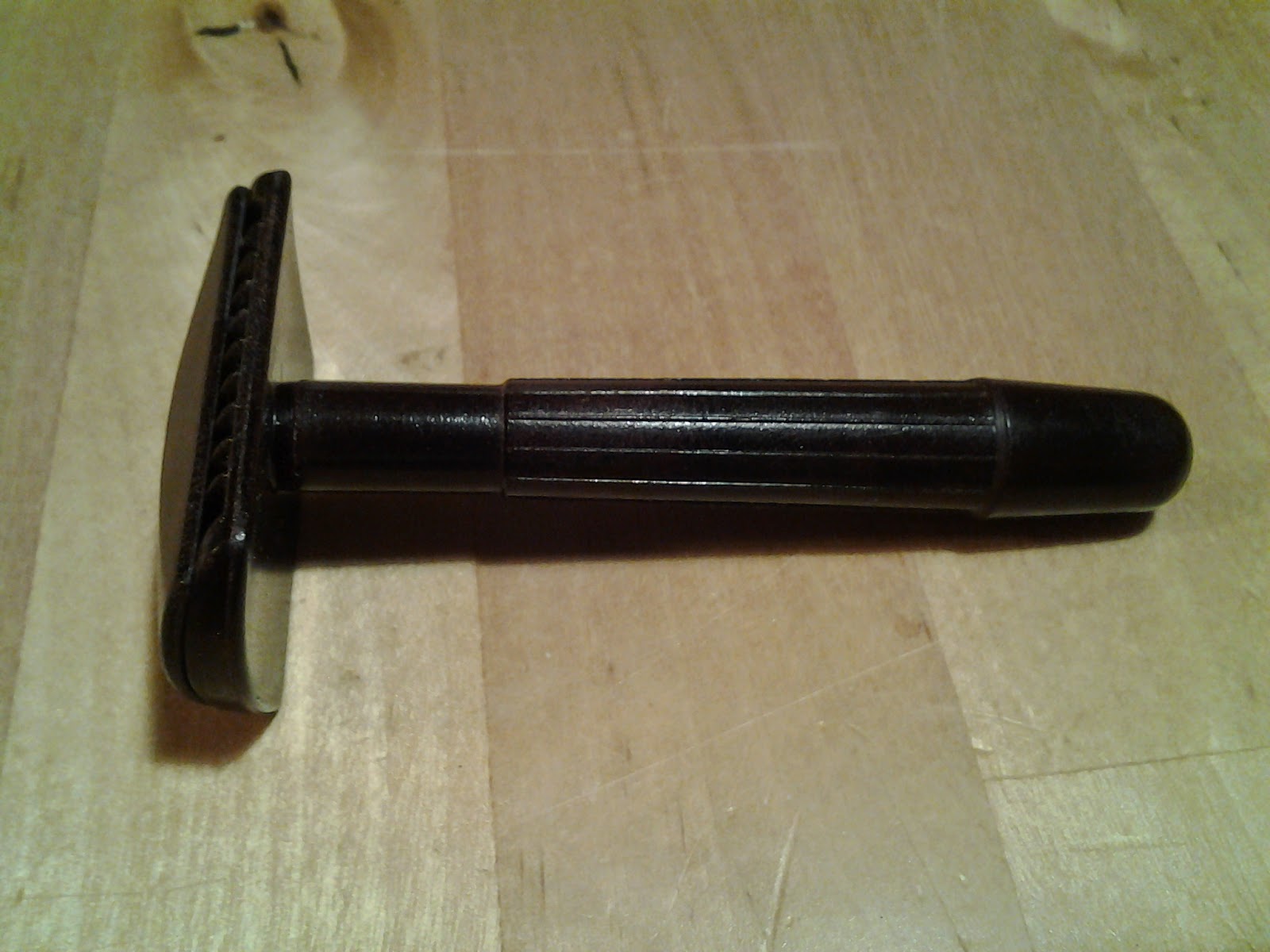 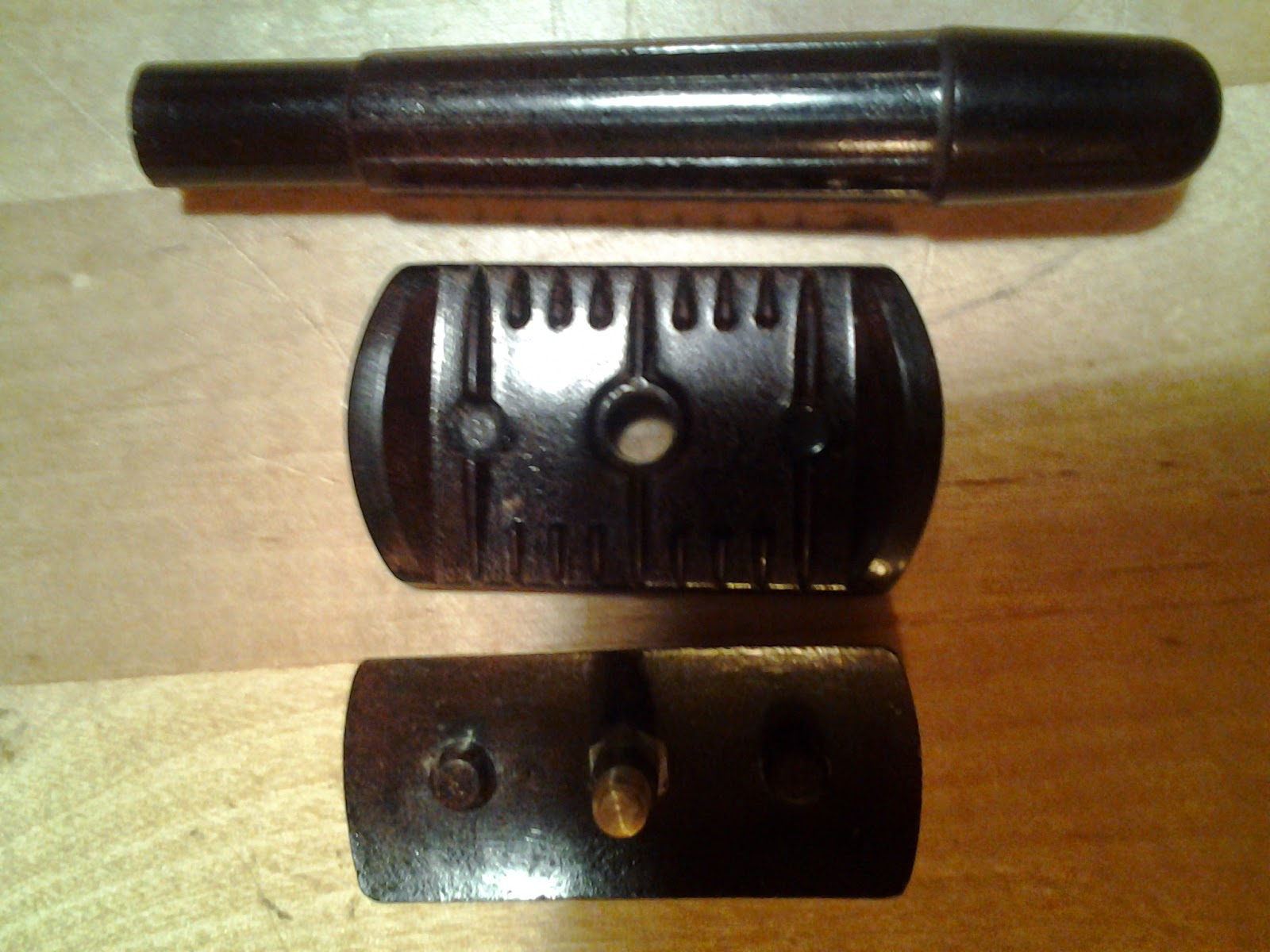 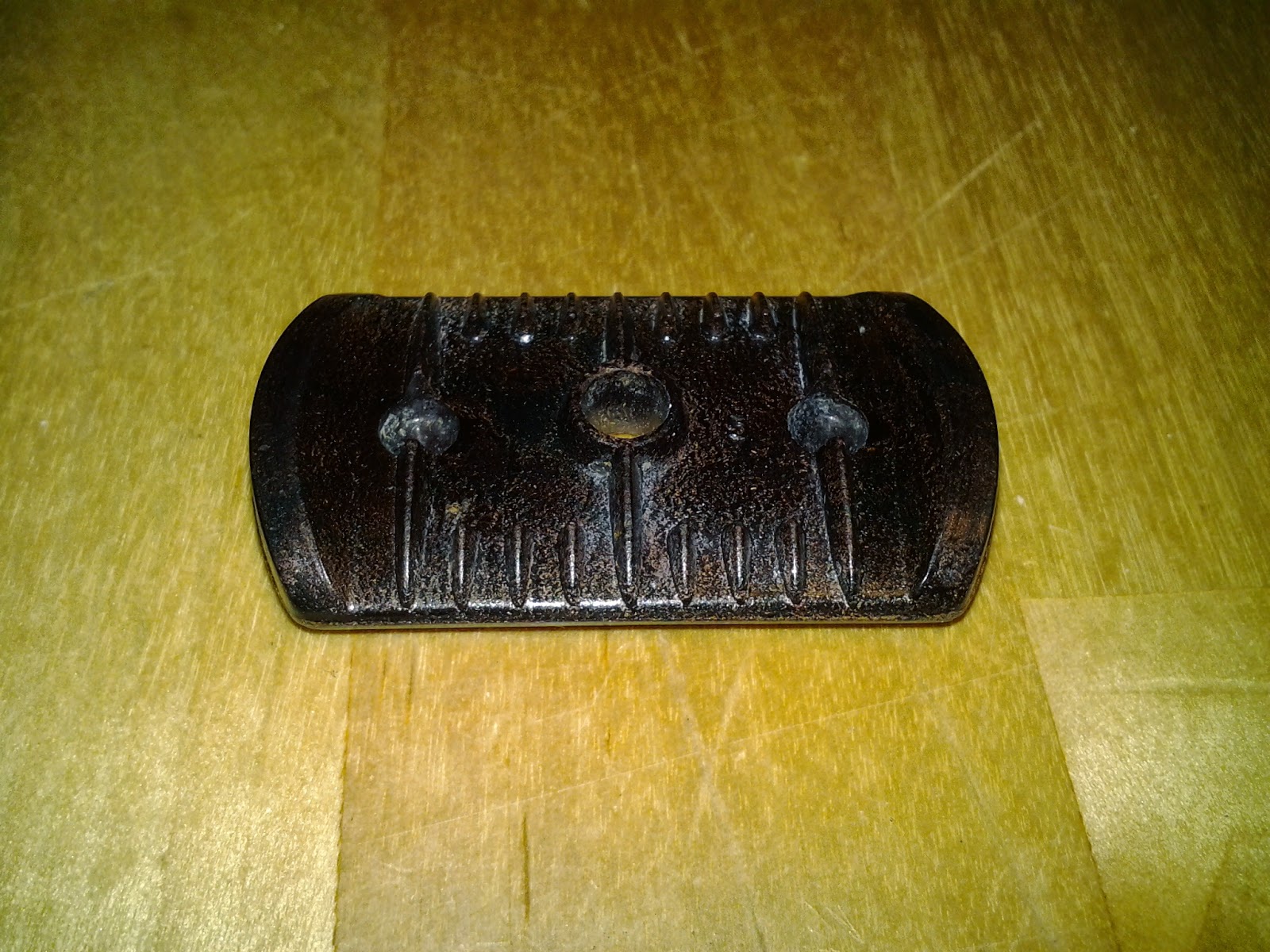 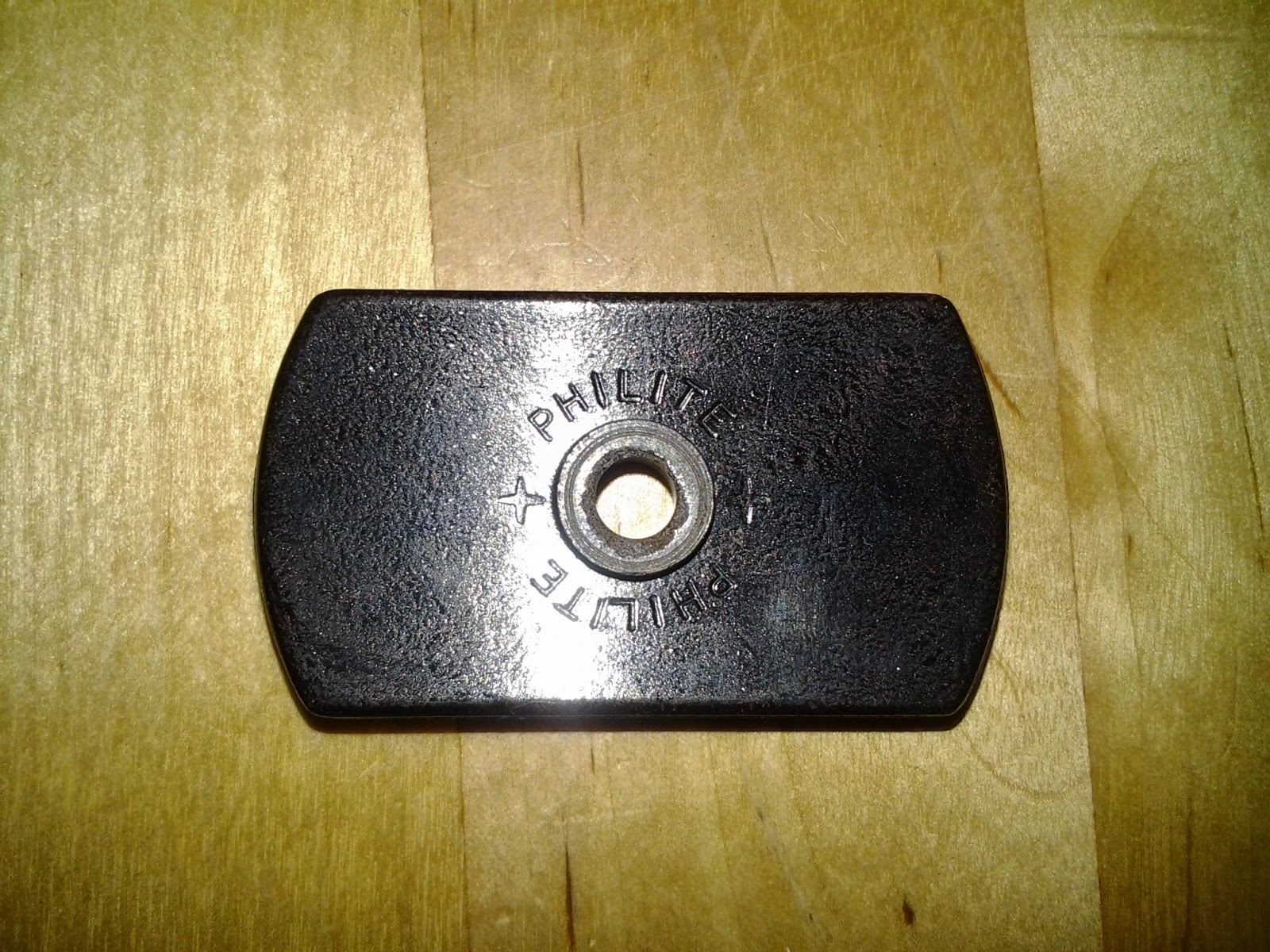 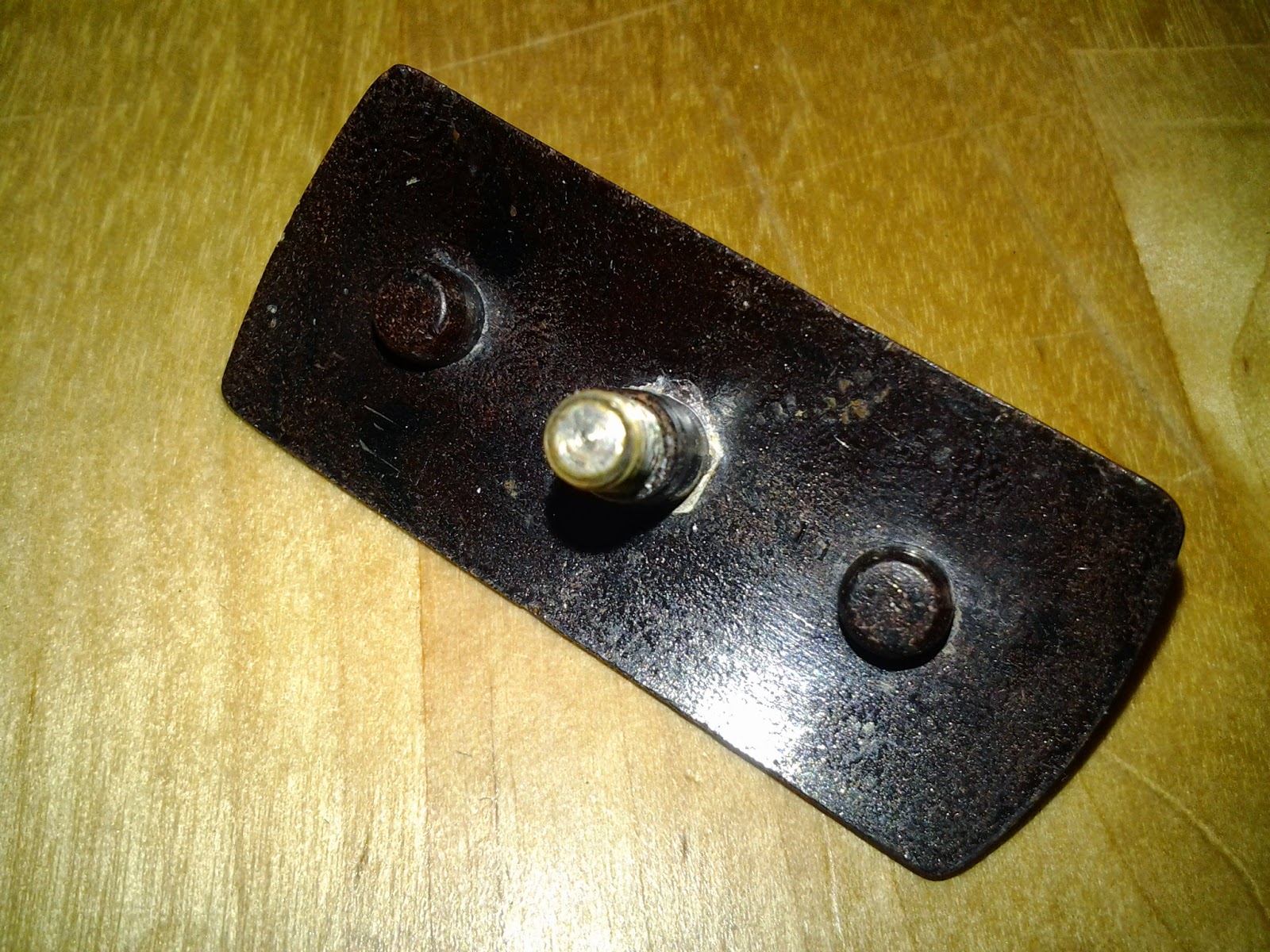 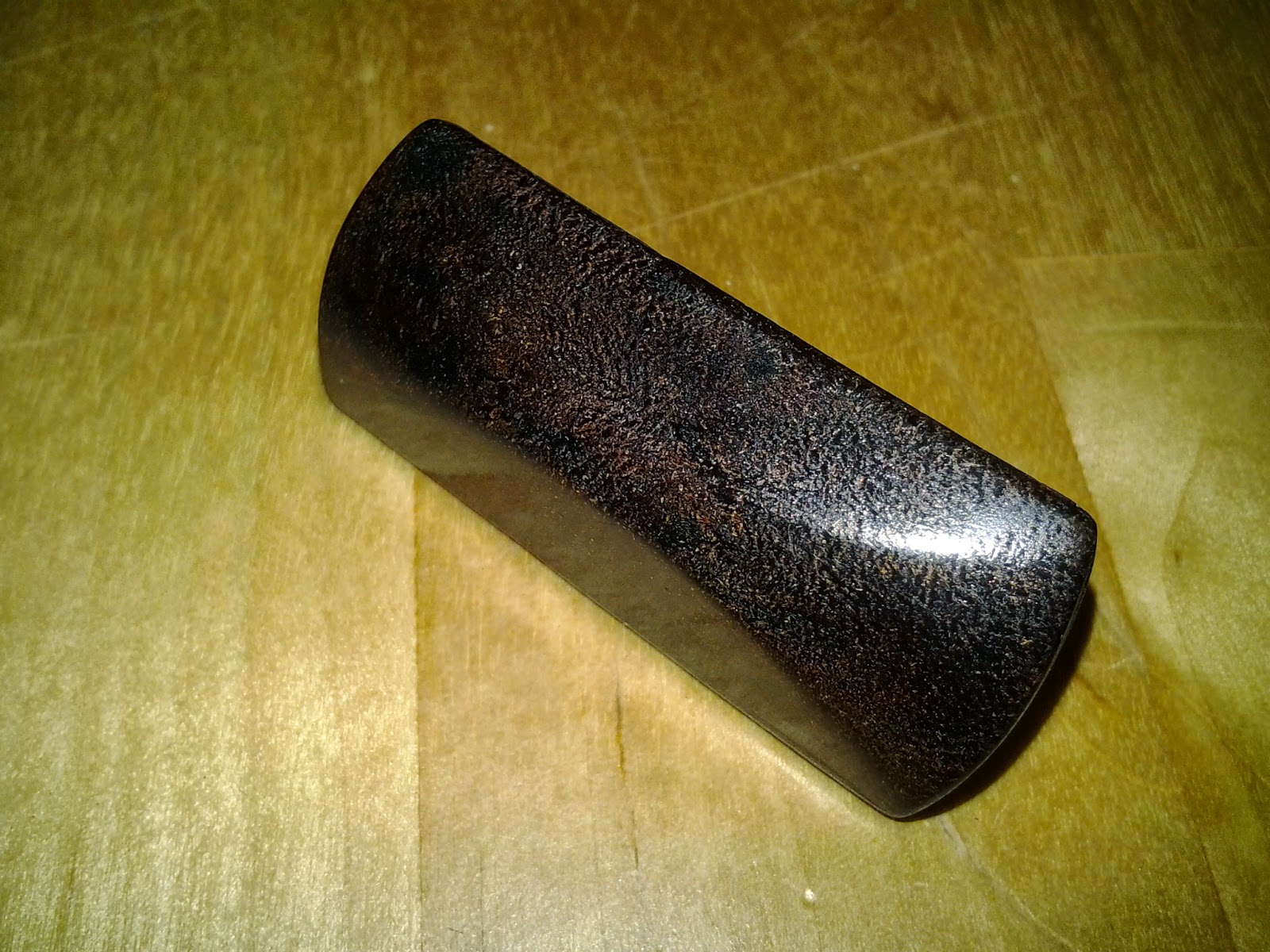 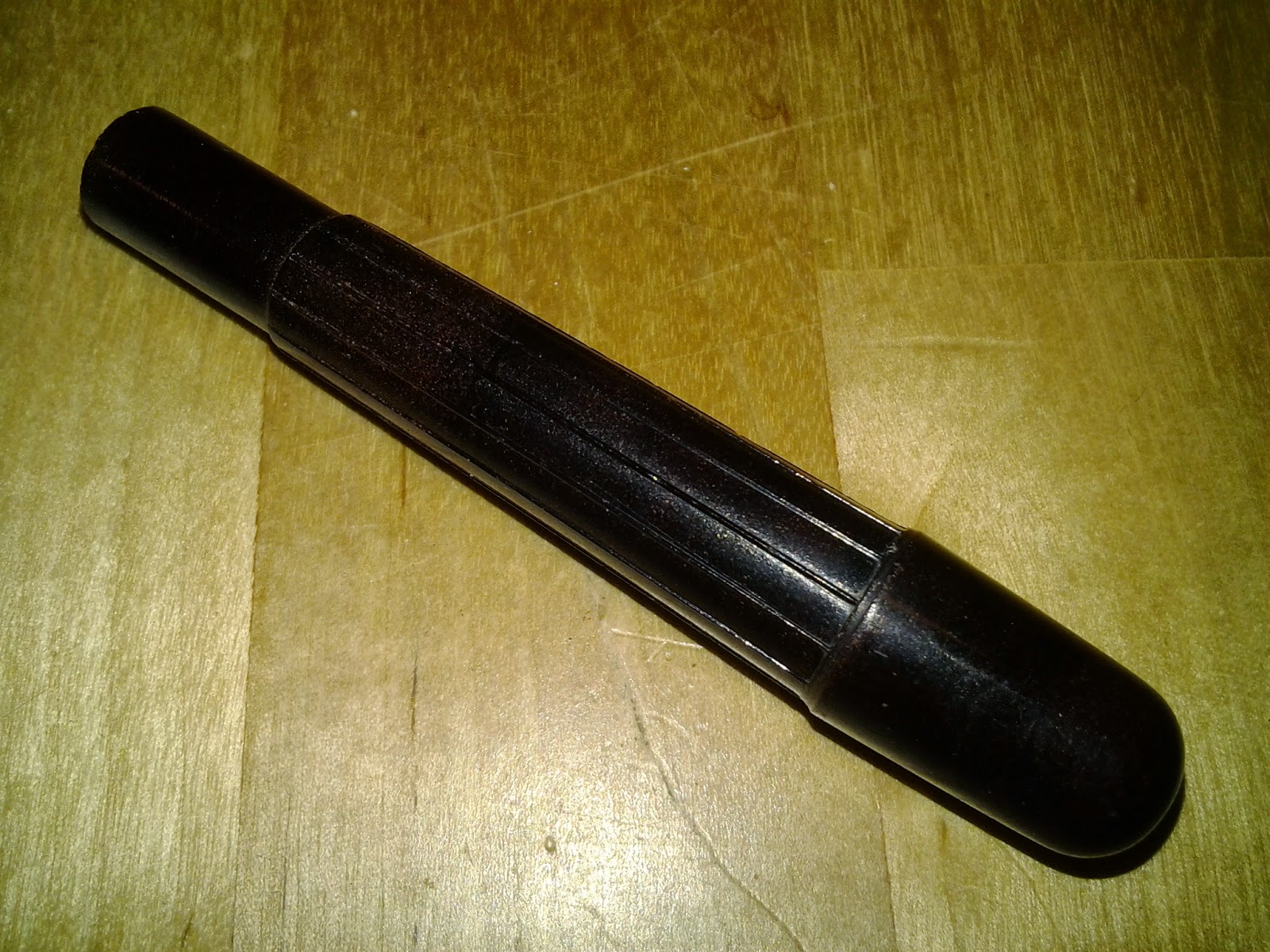 Overall the razor is in amazing shape – the pitting don’t detract from the overall appearance or feel – and having used it for a week I couldn’t be more happy with the shaves I get… at least when pared with a milder blade like the Green Astra.

What little I could find online told me that the Philips Philite should be an aggressive razor, but at least in my opinion it is not. It isn’t particularly mild either, being a instead a lovely middle-of-the road shaver. The grip is a little more slippery than most of my razors, about on par with my Bakelite slant and my Merkur 45C, but a quick drying off my hands helps with that minor issue – still, it’ll means that the Philite perhaps is not the best razor for those who shave in the shower. The blade loads straight in with no inclination to go crocked, and the head covers the tabs for those who get worked up over such things… I like both covered and uncovered tabs myself.

The balance is a little more “handle heavy” than most of my razors, which helps keep the pressure low when shaving… and when you shave, you’ll notice one thing the Philite do that I have seen on no other razor: 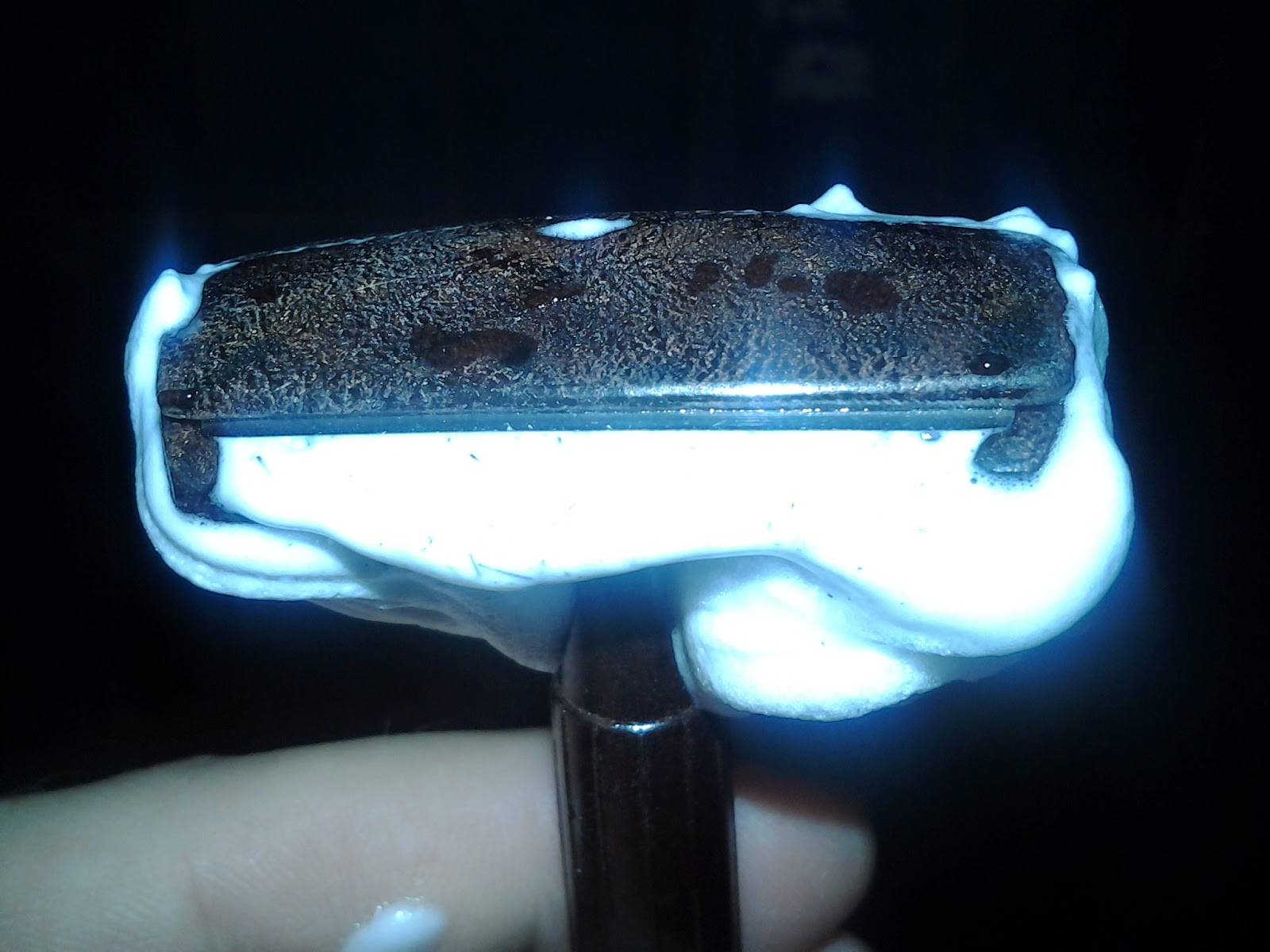 The lather will ooze right under the blade and come out on the other side! This is because the half-open comb isn’t really open at all – as can be seen in the picture of the base plate there is no openings in the plate for lather to escape, so the lather simply travels between the ridges.

Added bonus; It makes the Philite look interesting when viewed face on since you can see though the head: 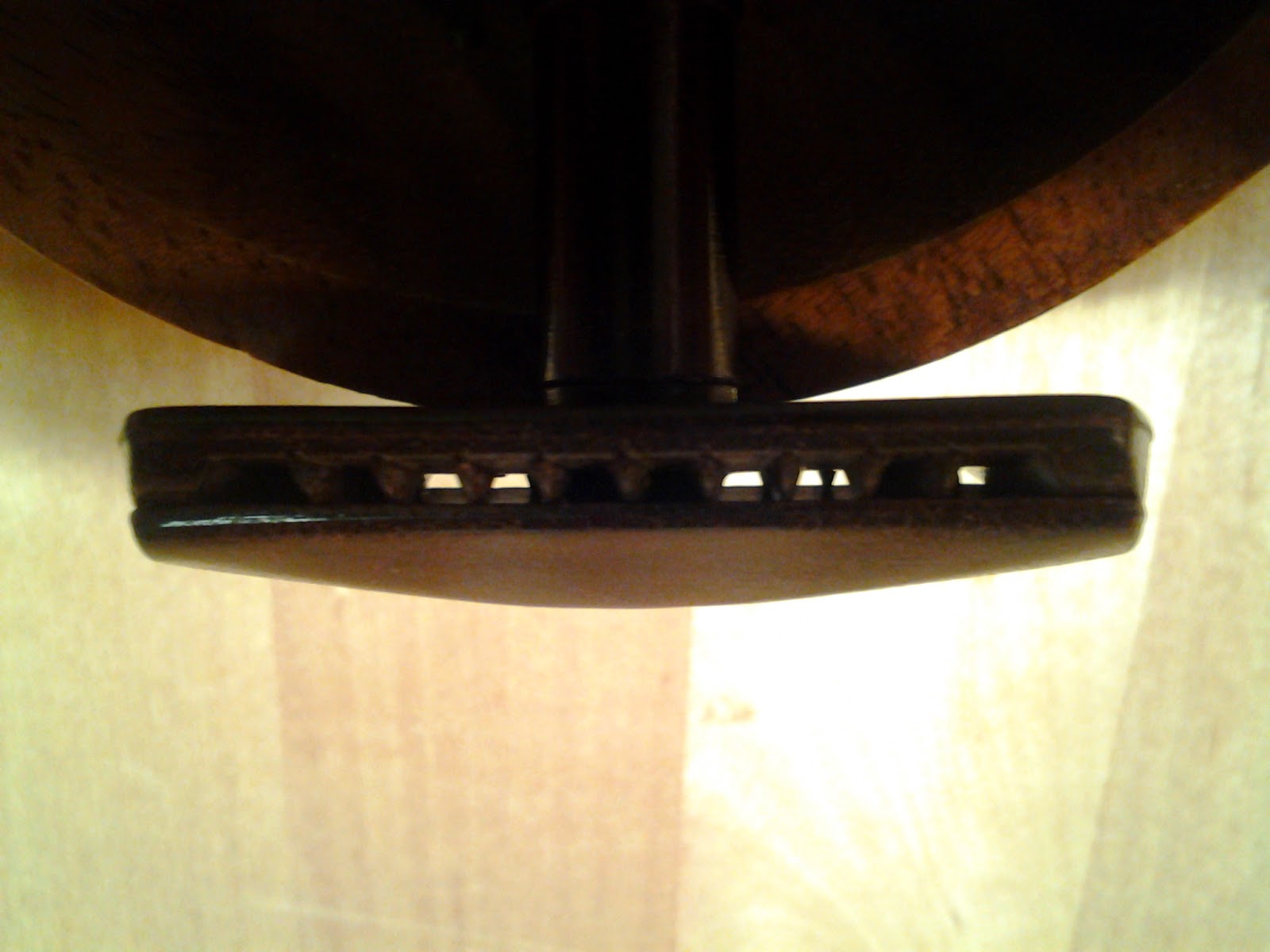 Overall a great little razor giving a smooth, comfortable shave. They seem to be reasonable rare, so if you find one you may want to grab it before it disappears. 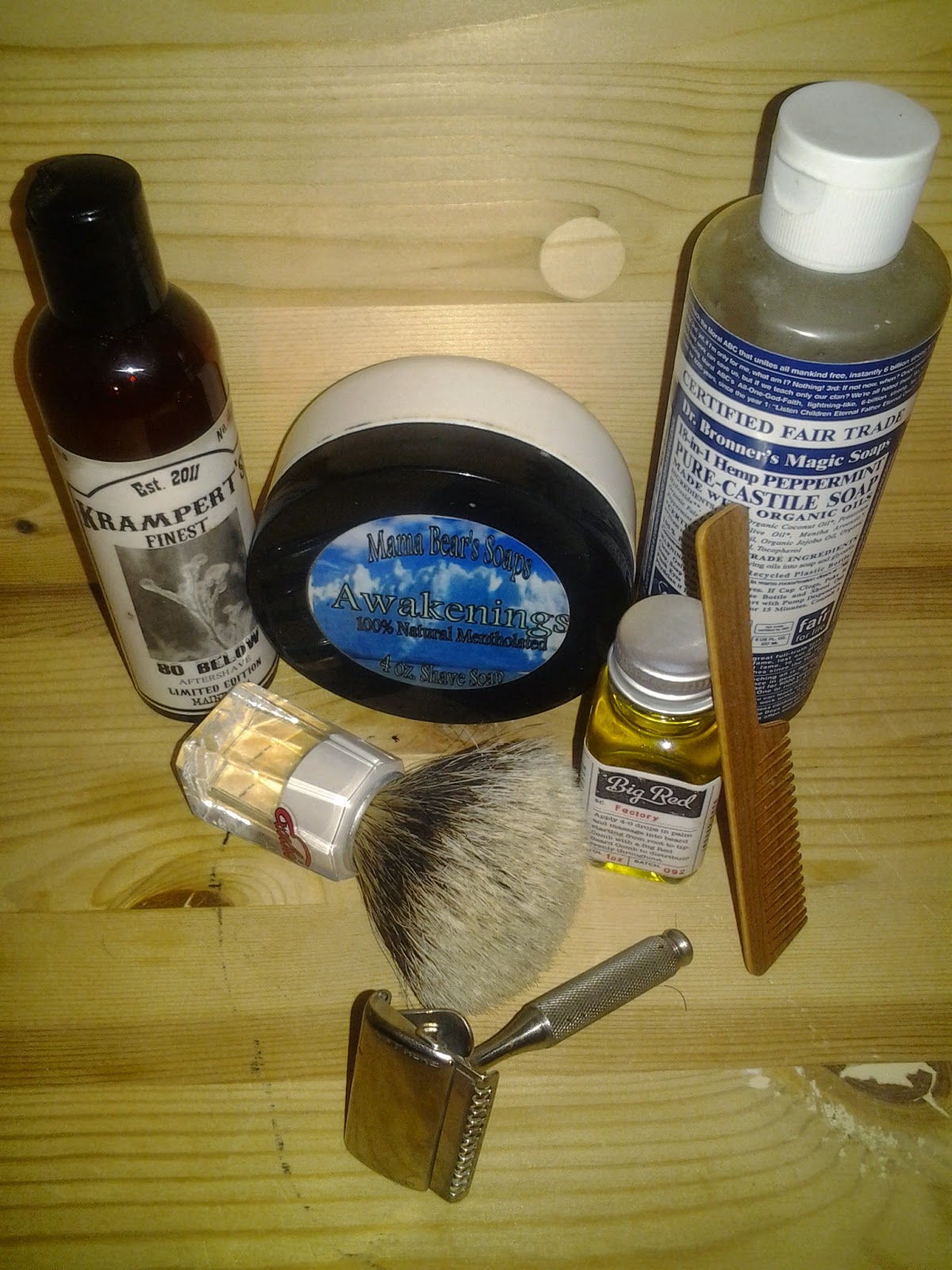 When the aerosol can with canned foam appeared on the marked several inventors noted that unlike traditional soap and cream, the new canned stuff made a mess. A common idea seems to have been to introduce the stuff directly into your brush for less messy shaving.

In 1954 Mr Alfred B Miller got a patent on a shaving brush head that would convert a can of foam into a brush… although a rather large and awkward one.

…object of the invention is to provide a device of this character whereby a brush carrying element may be detachably connected to the top of an ordinary container having a supply of soap and wherein an element may be operated to actuate the soap dispensing nozzle of the container. 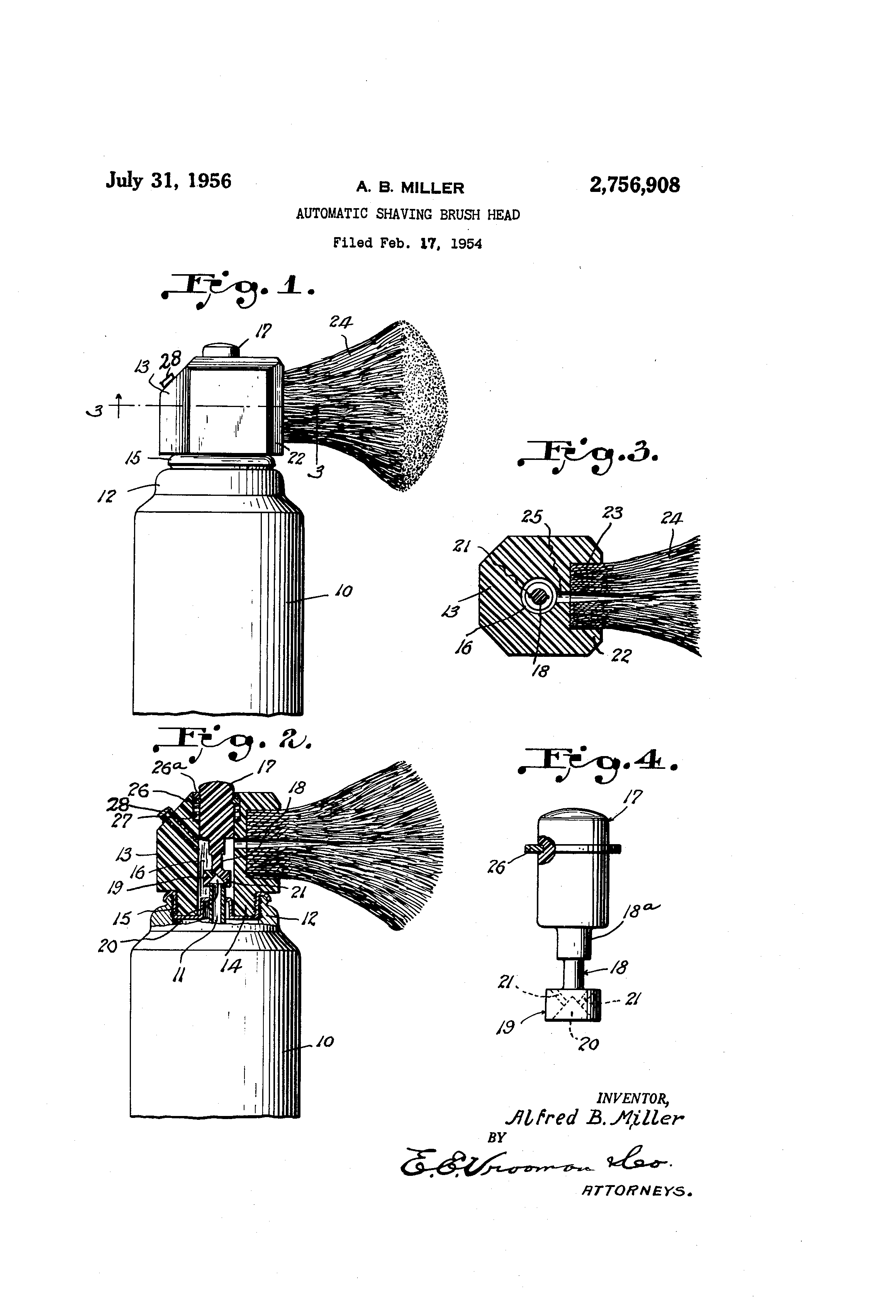 The next one I found was Mr Cleghorn John, whom in 1965 applied for a patent for a shaving brush that you could attach removably to a can of goo… I guess that is legalese for one you press against the top of the can to load.

…the principal object of our invention to provide a shaving brush that will be removably attachable to a lather dispensing container for use either independently, as an ordinary shaving brush, or in conjunction with a pressurized dispensing can for automatically feeding lather directly to the tip of the brush as needed in shaving.

Part of the patent also describes an “improved” aerosol can where the valve was operated by pushing sideways and not down, for use in conjunction with said brush. 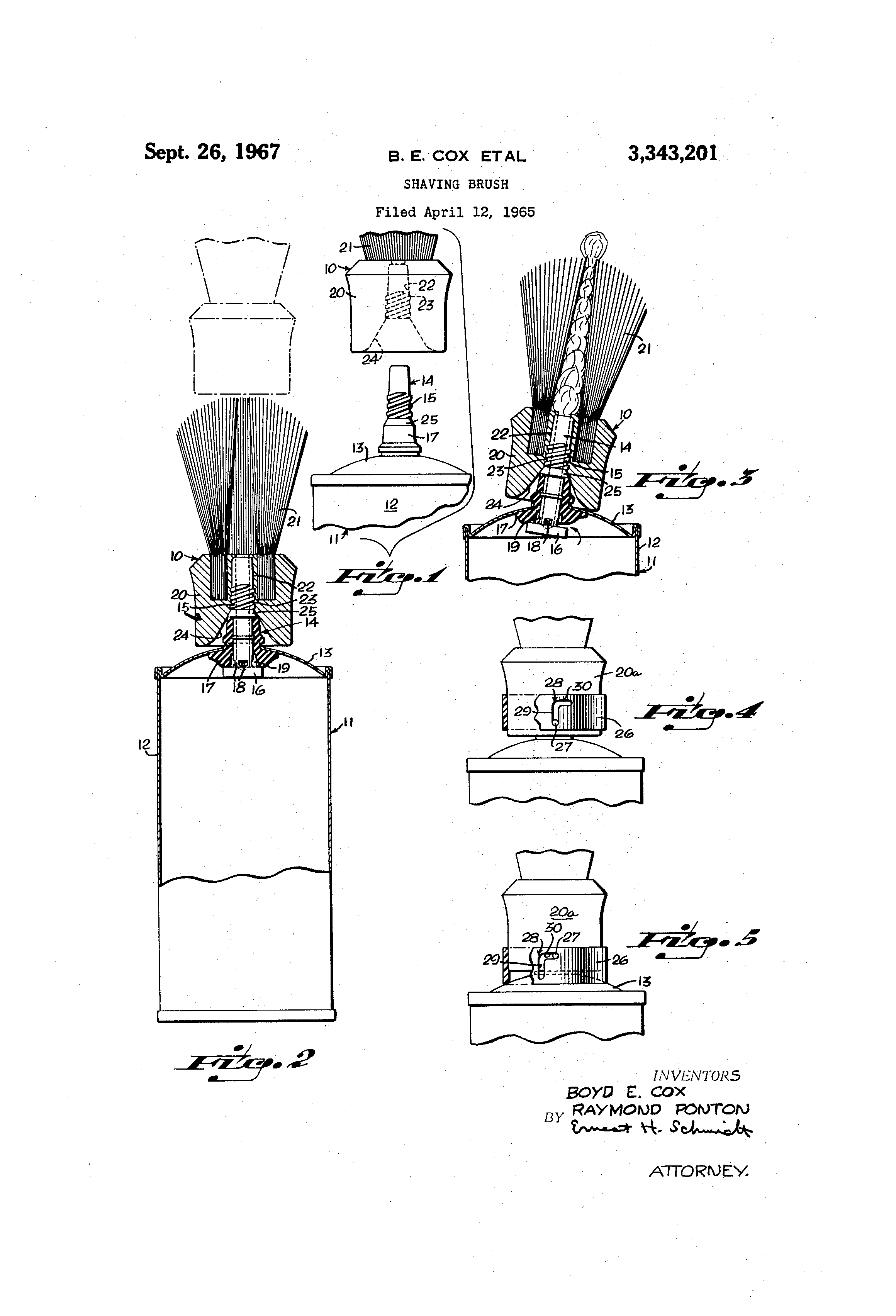 Last one that I spotted on the first page of Google Patent Search was Mr Cleghorn John’s patent also applied for in 1965. It actually describes two brushes – with a simple hole through the base for pressing against the valve on a can of foam, one with the can of goo built into the handle…

In the invention in the instant application, these problems are eliminated by encompassing the soap dispensing container in the handle of the shaving brush. The soap is discharged into the base of the brush bristles thereby evenly distributing itself throughout the bristles.

Further, in the event a container separate from the brush is desired or necessary, this invention can readily be adapted to function in substantially the same manner even though utilizing the extraneous soap supply. 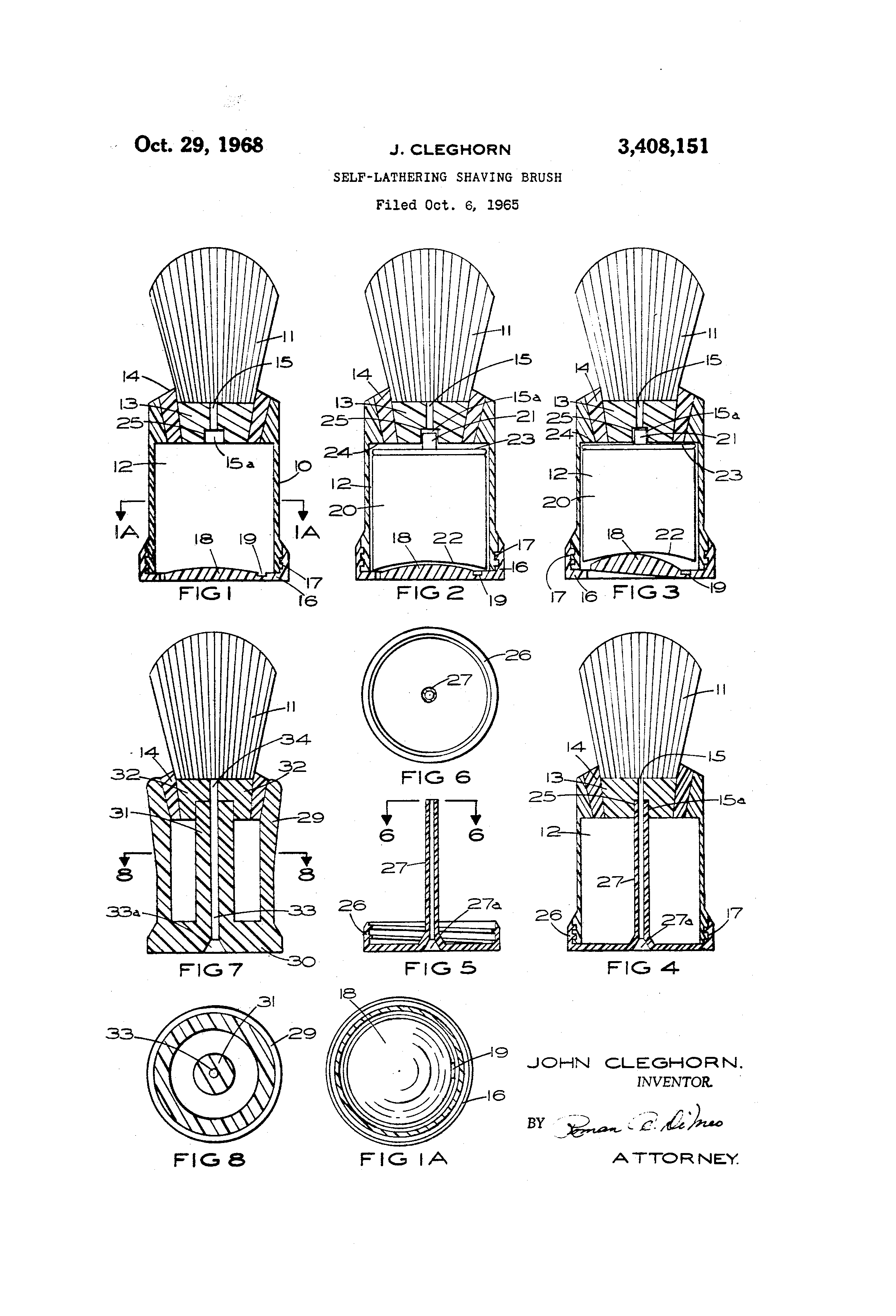 While I’ve never been a fan of canned goo myself, at least when the canned shaving foam was new on the marked there was attempts made to make it more like traditional shaving… I wonder if anything like this ever made it to the marked?

Back when I first heard about Mike’s Natural Soaps, I naturally wanted to try all of them… so I bought a whole boatload of samples.

Some I finished off, a couple got integrated into the tins I bought later, and some… just hung around. Got used on occasion, but not often. Part of the reason why is that chasing a small piece of soap around the bottom of a tupperware isn’t a great way to lather up, part is that there were scents that wasn’t my favourites.

In an effort to tidy up and get some use of out the leftover samples, I decided to combine them into something I call Mike’s Mixed. The process was simpler and quicker than expected, taking less than ten minutes from start to finish – including some time in the fridge, because I’m impatient at times. 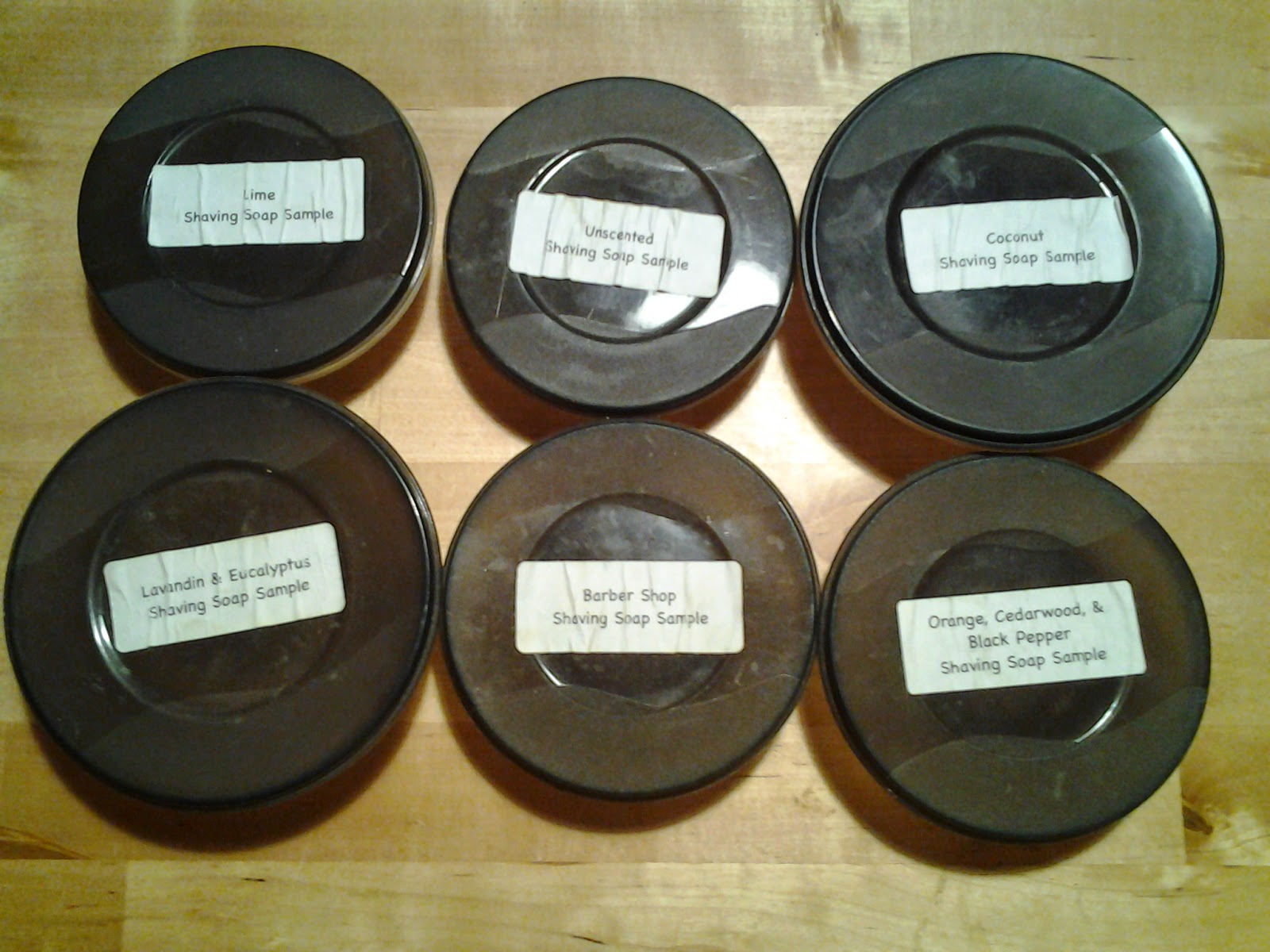 First, gather all the leftover samples. In my case, it was Lime, Unscented, Coconut, Lavindin & Eucalyputs, Barber Shop, and Orange,Cedarwood & Black Pepper. 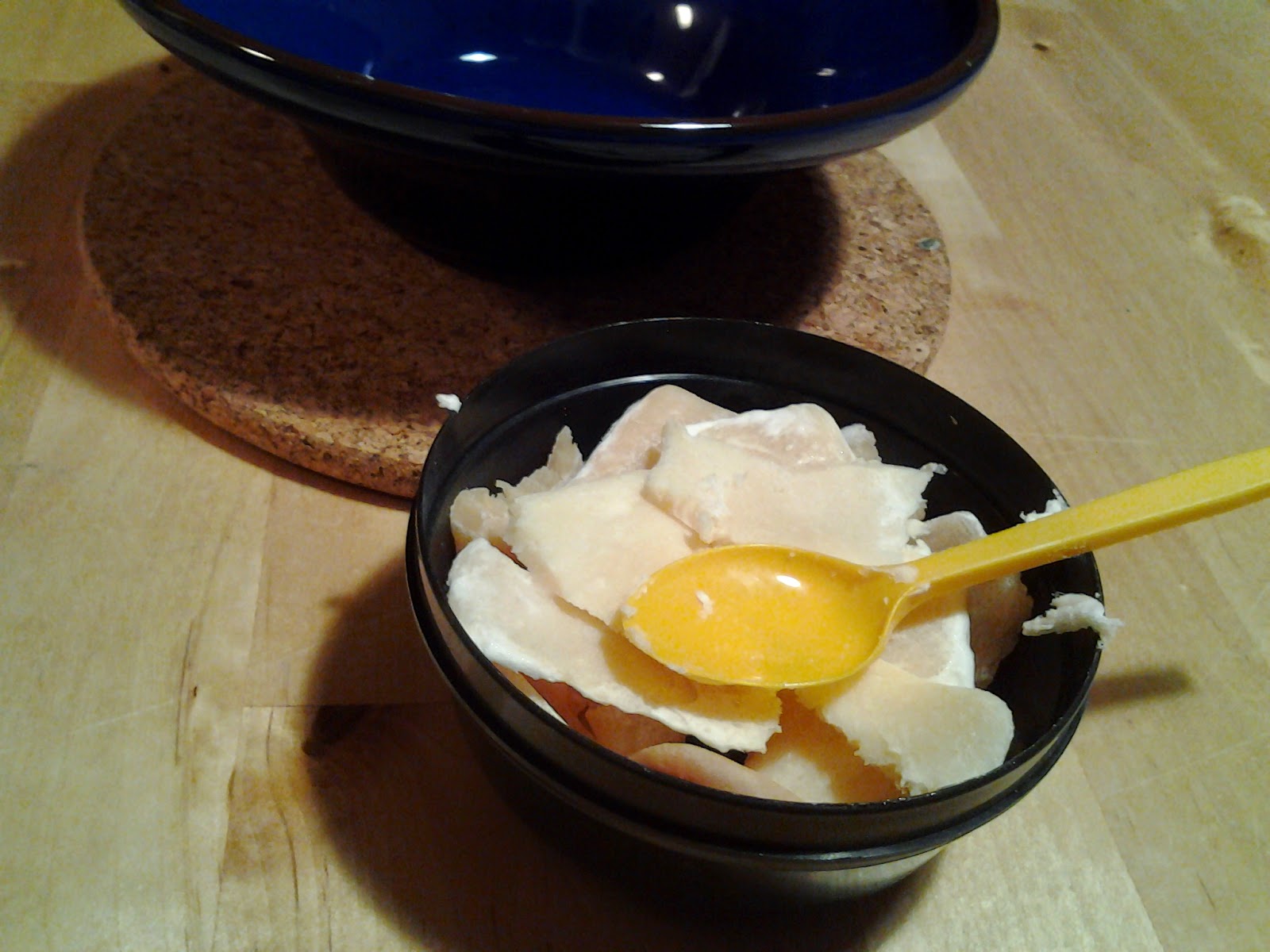 Place all in a suitable container – I used an empty RazoRock jar, simply because I have it and the lid closes tightly. 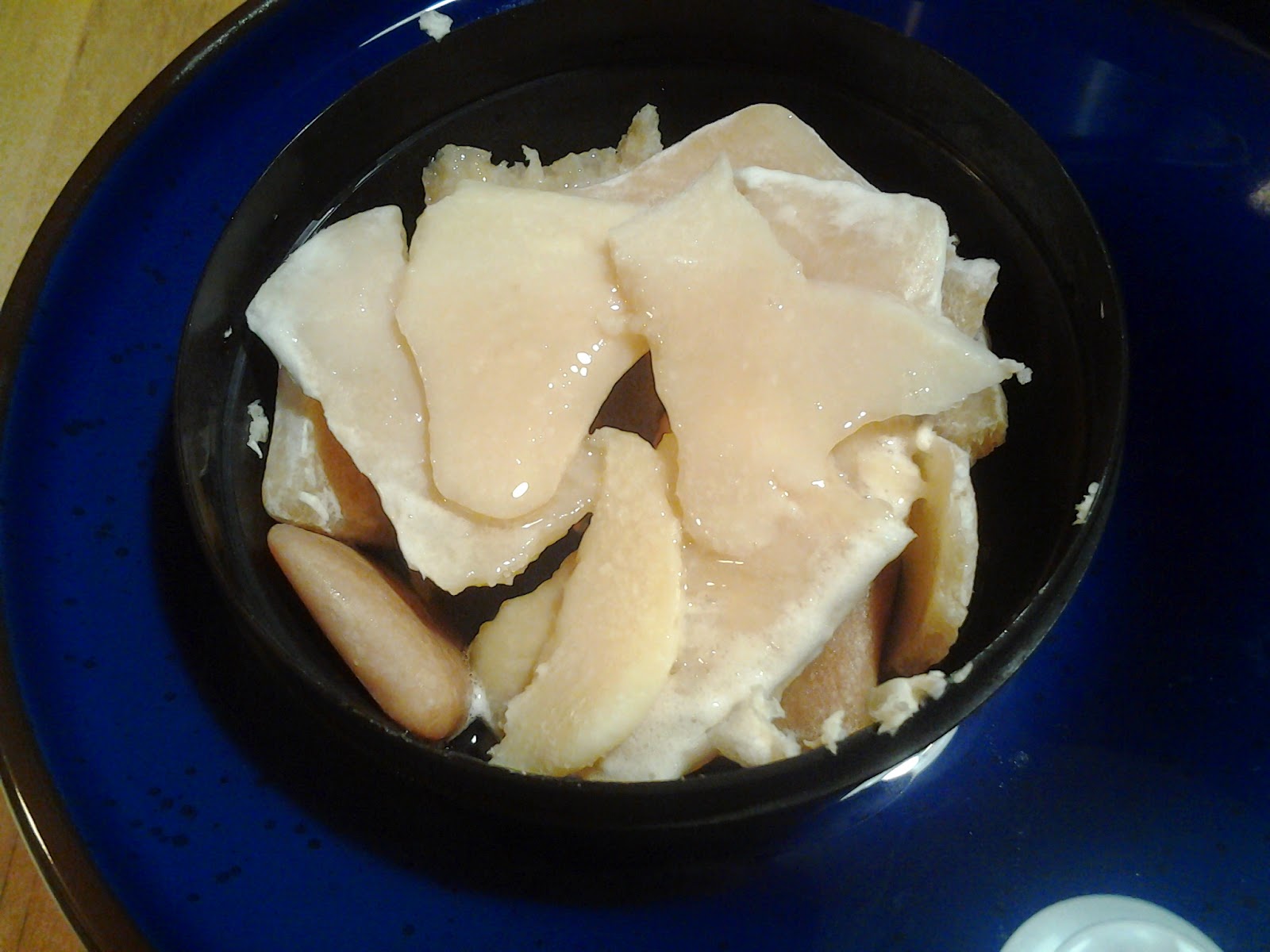 Place the container with the soap in a bowl of near boiling water, and add a little less than a teaspoon of boiling water to the mix. 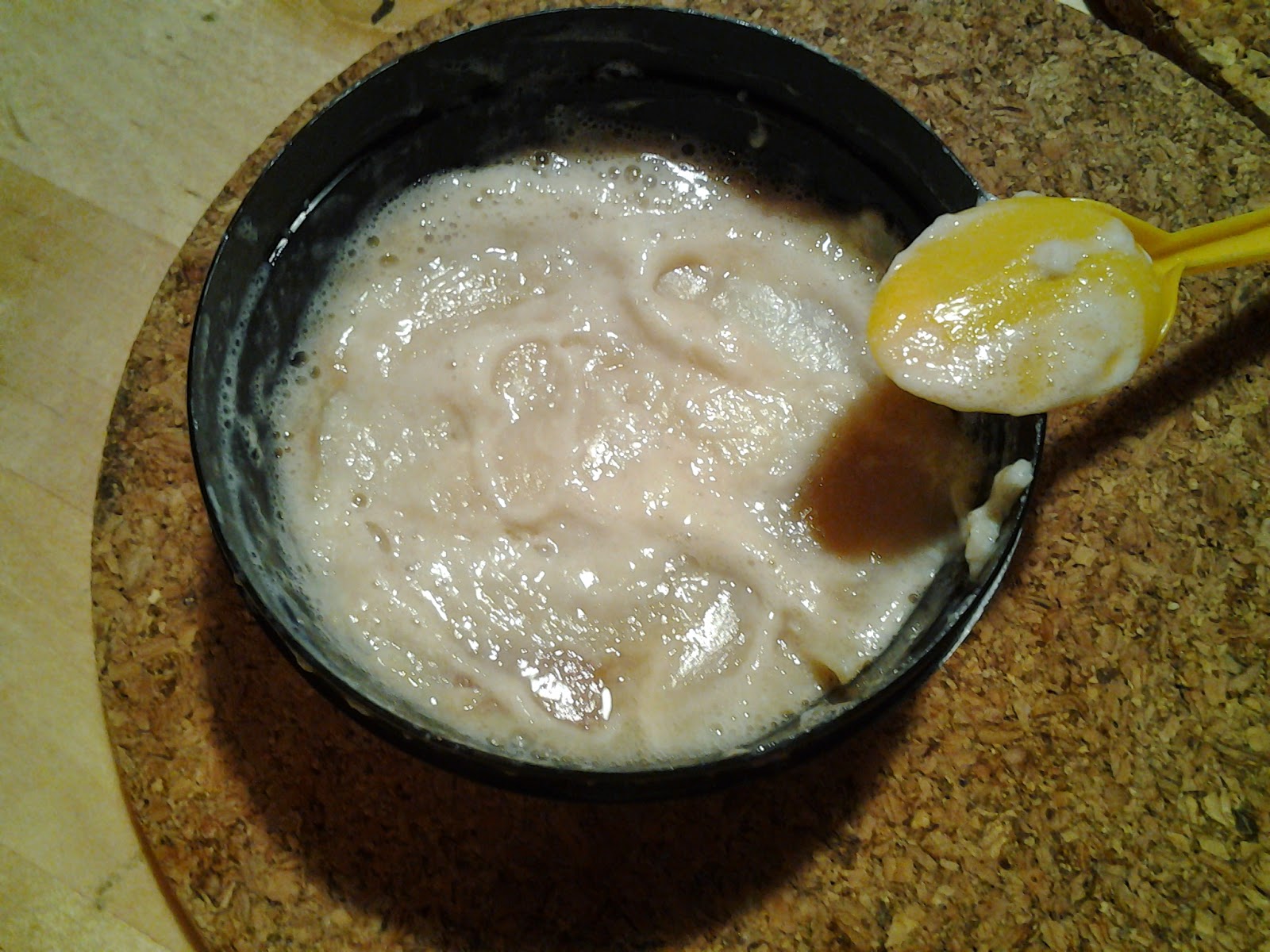 After a minute or so the soap melts, letting you tamp it down and get rid of any air that is trapped. Smooth the top off after removing it from the hot water. 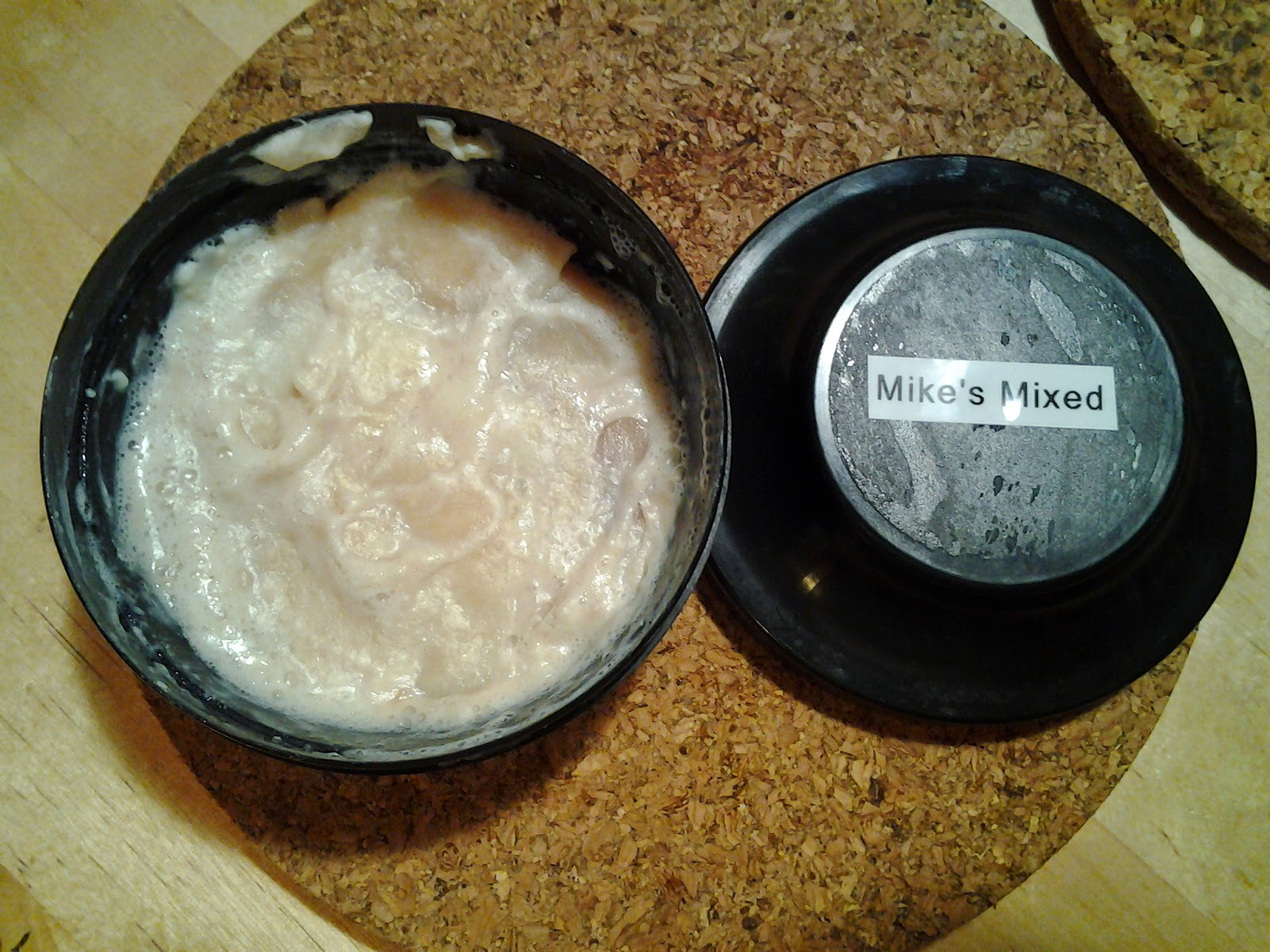 Let it cool, make a label… and that is it. One puck of Mike’s Mixed, ready to use. 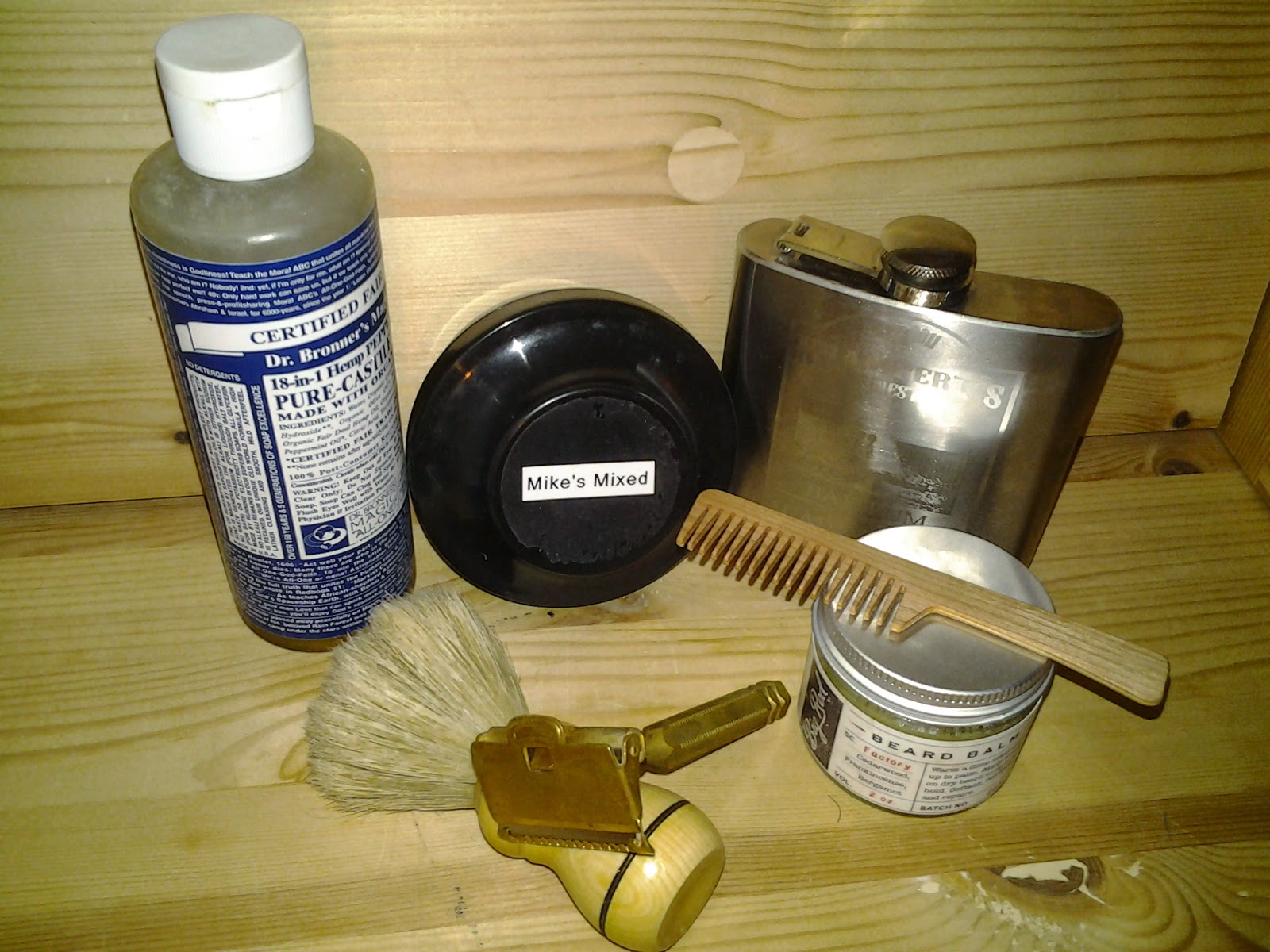