About a year ago I did a quick review of Col Conk’s Bay Rum soap, so I figured it was time to revisit it in light of what I learned since.

Col Conk Bay Rum is a decent enough glycerin based soap – which means it’ll leave my skin feeling dry after a shave. I did read up on the soap before buying, and there are some glowing reviews of it online… but in hindsight I feel it might be more rightly classed as a middle-of-the-road shaving soap and not a great one. It’ll gives a good shave and the scent is pretty good too – while not on the level of Krampert’s Finest Bay Rum – but other aspects are middling to bad. It is also quite subtle and far from overpowering, which is a Good Thing™.

The lather from Col Conk has decent slip, but the cushion could be better in my opinion. And the moisturizing properties simply are not there – a good aftershave or face balm is a must after using the Colonel. The lather also breaks down quicker than tallow based lather, even more so if you use the brush vigorously… my common approach to all problems with lather – add more product – goes some way  in alleviating the issue though.

The official black oak bowl I got mine in also leeches colour into the lather, leaving me with a gray and less appetizing lather… purely cosmetic, but somewhat distracting. Col Conk’s is very lather-able for me, although I do have soft water. If you got hard water it’s likely to be a case of YMMV… at least if reports online is to be believed.

Being a glycerine based soap the puck also wears faster than tallow – so even if the soap is cheaper than most it’ll wear thin quickly; some shavers online report getting a month of shaves from one puck.

Speaking of reports online – if you put the online reviews Google will find for you on a timeline, you’ll find that the most raving ones is the older, while the, ahem,  less glamorous ones are newer. there might be two explanations for this:
– They have changed the formulation, creating an inferior product.
– More and better soaps have emerged, many of which are from artisans. 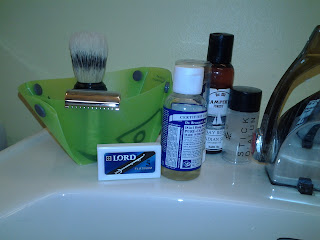 Sort of on the go, so shaving from the GoBag.

I’ve mentioned my Omega 50014 before, but now that I used it a bit more I feel I can expand a bit on my first impressions of this travel brush.

Now that it’s properly broken in it’s gotten to be very soft, almost silky on the tips. It still retains more than enough backbone to get the lather down into my stubble, but I feel myself halfway wishing it had a tad more scritch… just a tad though. It’s wonderful for whipping up lather on my face, and works just as well in a bowl of that’s your preference while traveling – personally I tend to use a bowl at home and facelather while on the Go, but YMMV and all that; the brush works well both ways.

I do like the fact that you for all practical purposes can choose to have a small or a large handle with this brush; it adds to the flexibility and utility, and should be a boon for those who sometimes suffers from sore and stiff fingers.

The downside of this as a travel brush is that it takes a while to dry – something it shares with all non-synthetic brushes. This means that for me it’s a brush to use while going somewhere for staying in one spot… not for when I travel on the Go and don’t always know where (or if) I’ll get to shave the next morning. It does mean I keep two travel brushes on hand, but it’s a very small price to pay for what I get in return; a bit of luxury away from home.

Bottom line? If you like boar, need a travel brush and can live with a brush you have to let dry for a bit… go get a Omega 50014 – it’s well worth the rather reasonable price asked.

…at least I think I’ve been a good boy so far.

There is more to taking care of ones appearance than a great shave – even if a great shave goes a long way – and one problem many have is dry scalp. Or, put bluntly, dandruff… I suffer from it from time to time – usually in the summertime – but have found a cheap way to deal with it that works wonders for me.

First step is to get some gloves out… because you should go pick yourself a big bundle of stinging nettle leaves. Fresh leaves are best – or so my sources say – and you going to need half a liter of so of packed leaves (that’s a pint or so for those who haven’t gone metric yet…). Grab an enameled or stainless steel pot and put the leaves in, then add about a half liter of water – distilled or bottled water is ideal, but tap water should work fine unless you got very hard water. Bring to a boil, then pull of the heat and let sit until it’s cool.

Once it’s cooled down to room temperature you can simply strain the leaves out and transfer the infusion to a plastic or glass container. Used as a rinse when washing ones hair should help against dandruff – I also mix a little with the shampoo to work it into my scalp. Excess infusion keeps well in the fridge by the way, so you can make a large batch early in the season and keep all summer.

In addition to helping with dandruff, nettle is also commonly held to promote glossy hair – which apparently is why some farmers adds it to the cattle-feed. Nettle tea – preferably with a sweetener – is traditionally considered to be good against many ailments, both internal and external, among them disorders of the kidneys and urinary tract, gastrointestinal tract, locomotor system, skin, cardio-vascular system, hemorrhage, flu, rheumatism and gout.. One should be careful with drinking too much though; nettle extracts can cause increased testosterone levels, and have been used by bodybuilders to achieve that effect.