We have all at some point heard about the 80/20 rule, more formally called the Pareto Principle, is usually stated something like “80% of the work takes 20% of the effort”. The corollary would be that 80% (16% of the whole) of the remainder takes another 20% of the work, 80% of what’s left will take another (3.2% of the whole) takes another 20 % and so forth – in other words you’ll be running afoul of the law of diminishing returns fairly fast.

If we consider that shaving consists of
– Prep or pre-shave
– First pass
– Second pass
– Cleanup or buffing
– Post shave
and further assumes that each part takes roughly the same time (which holds true for me at least)… we can quickly estimate that a two pass plus cleanup gets rid of 99.2% of the stubble. A three pass plus cleanup will get a little bit more, but unless you did a sloppy job on the two first passes the difference should be quite minor.

So there you go; a tongue-firmly-in-cheek “proof” that a two pass plus cleanup gives a Damn Fine Shave!

As a sidebar: If you find that 80% of the effort do 20% of the work when you shave, it’s time to change your blade or strop your razor. 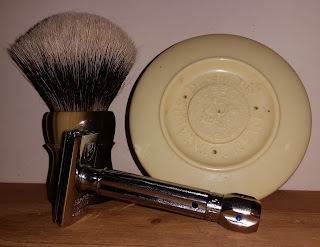 A repost from oct 2014, for the enjoyment of readers old and new

I been thinking again, and sometimes when I do that my brain gets stuck on questions I cant answer…

Given that the original Gillette blade was – among other differences – noticeable thicker and therefore more rigid than today’s blades, and that perceived blade aggressiveness is often linked to blade exposure and angle… would an old razor (like, say, a Gillette Old Type from 1918) shave and feel any different back then compared to these days?

The blade of my razors made of’ sheet steel having preferably a uniform thickness of about six one-thousandths of an inch.

A fair bit of digging online seems to indicate that modern blades are about 0.10 mm thick, or about 2/3rds as thick as the old blade – assuming, off course, that the original blade was as thick as the patent calls for. It’s hard to tell exactly when blades got thinner, but over on another forum I spotted one guy claiming that

For all I know the increased thinness of the blades could have started sooner, the the modern shape and perforation of the DE blades seems to have appeared around 1930. Going by the patent numbers listed on a US Gillette Blue from 1935, it’s hard to tell… several references to “thin, flexible blade”, but nothing on just HOW thin it is.

When I raised this question on my favourite shave forum, the guy making my preferred aftershave pointed out that he likes SE razors due to their thicker, stiffer blades – which like DE blades used to be even thicker and therefore even stiffer – since they flexes less. I should probably get my callipers out to measure a new and old SE blade, just to see how pronounced the difference really is.

Stiffening of a blade can also be achieved by twisting it in a slant razor, and slants are often considered to be more “aggressive”… even if I personally don’t think my slants are aggressive, just efficient – perhaps aggressive is the wrong term, even if it’s commonly used to denote the opposite of a mild razor.

Making a number of wild assumptions, desperately pulling on what I learned in structural mechanics more than two decades ago, and hoping that this website have got their code right; the old blade ought to be twice as stiff as the current blades – with the biggest caveat being that the modulus of elasticity is the same for the steels used.

These guys offers (or at least offered) three hole blades that are a dimensional match for the pre-1929 Gillette blade… and it seems that one of the thickness’s they offer match the old blades. But the blades are made for cutting plastic film, so they will probably be rotten for shaving with.

After all that searching and math, I still have no real idea how a blade twice as stiff would affect the behaviour of an Old Style Gillette… Combining what what we know about SE razors and their stiffer blades with what we know about the torsionally stiffened blades in slants, I’m leaning towards the idea that the Old Type Gillettes using the pre-1929 blades may have been more aggressive than they are with the thinner blades of today.

I may be wrong though, with all the assumptions and guestimates underpinning that idea. 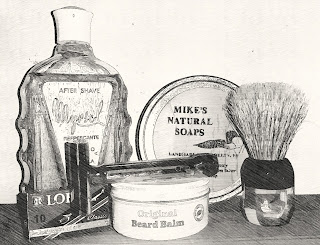 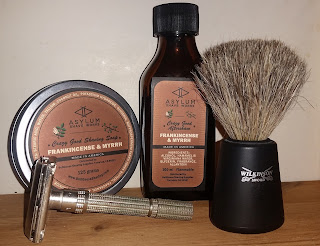 Again a few photos I found online; this time of a glass shaving bowl/scuttle of a design I’ve never seen before. As far as I can tell it’s a vintage item, but it must have been an unusual design even back when since I’ve not seen anything even remotely like it before.

The possibility do off course exist that the site I found it on is simply wrong, and that its intended use was not shaving… but if so, I have even less of a clue what it might be for.

As some of you might have guessed from one of my posts earlier this year – titled “Head shaving for n00bs” – I’m in the habit of buzzing and sometimes shaving my head. While people might do that for several good reasons, these are mine reasons to do so: 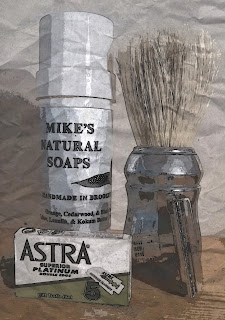 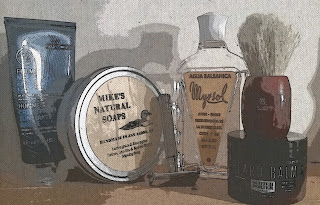