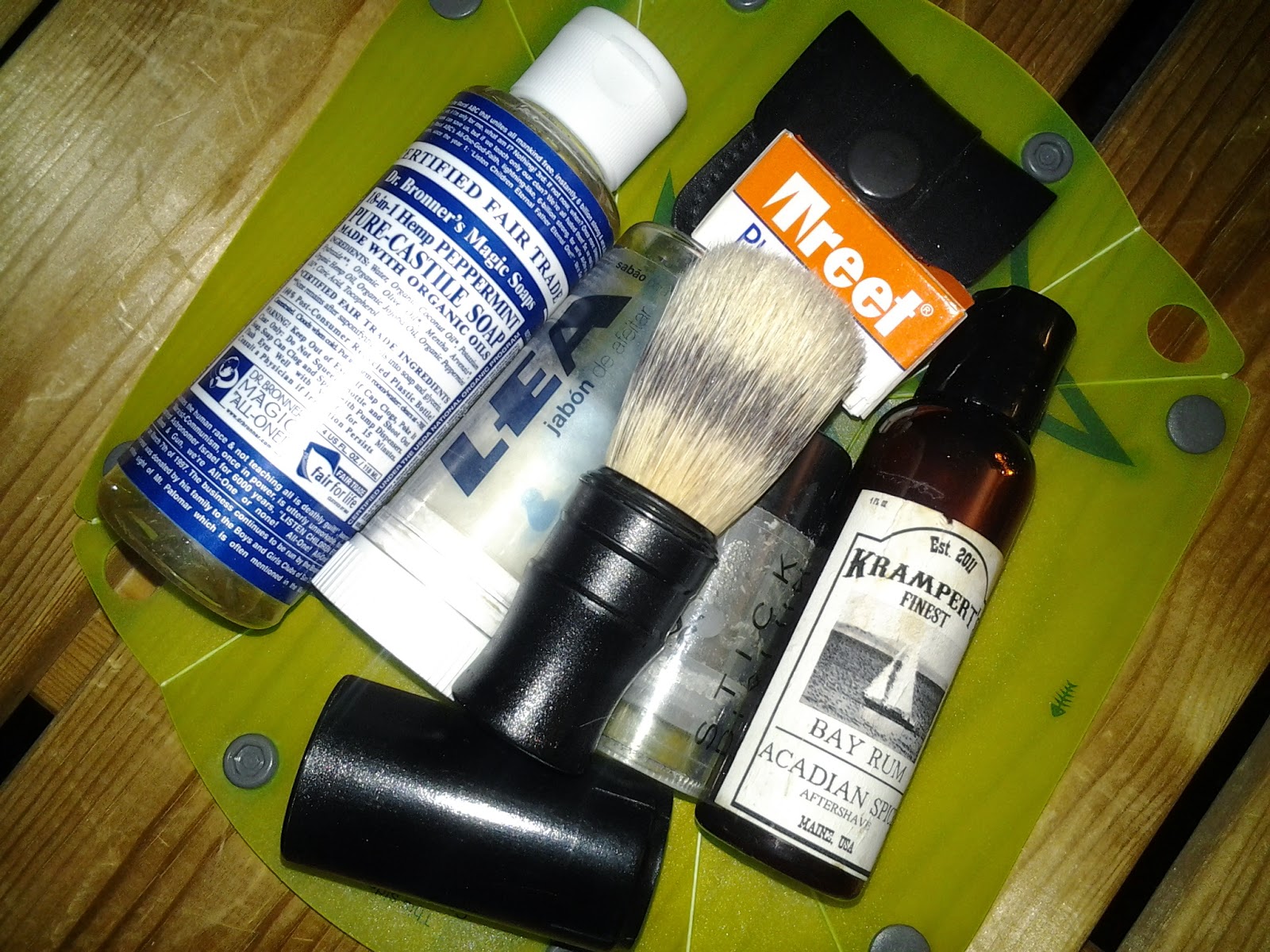 Is your bathroom chilly in winter? The the patented invention of Mr M M Gravin would be just the thing for you, despite the fact that the purpose of the invention was to provide for a more even shave.

It is a well-known fact in having with a razor that the heating of a razor blade, makes the razor blade out just that much better in shaving the beard. For this reason it is a frequent practice to dip the razor whether open edge or safety razor into hot water before the user shaves. The lather on the face cools the razor and lessen; the efficiency with which it cuts. This makes it necessary to frequently dip the razor in hot Water as the shaving progresses and makes the shaving uneven.

It’s not a well known fact any longer, so I’m not sure if this claim was pure hogwash or if it actually did make a difference with carbon steel blades. 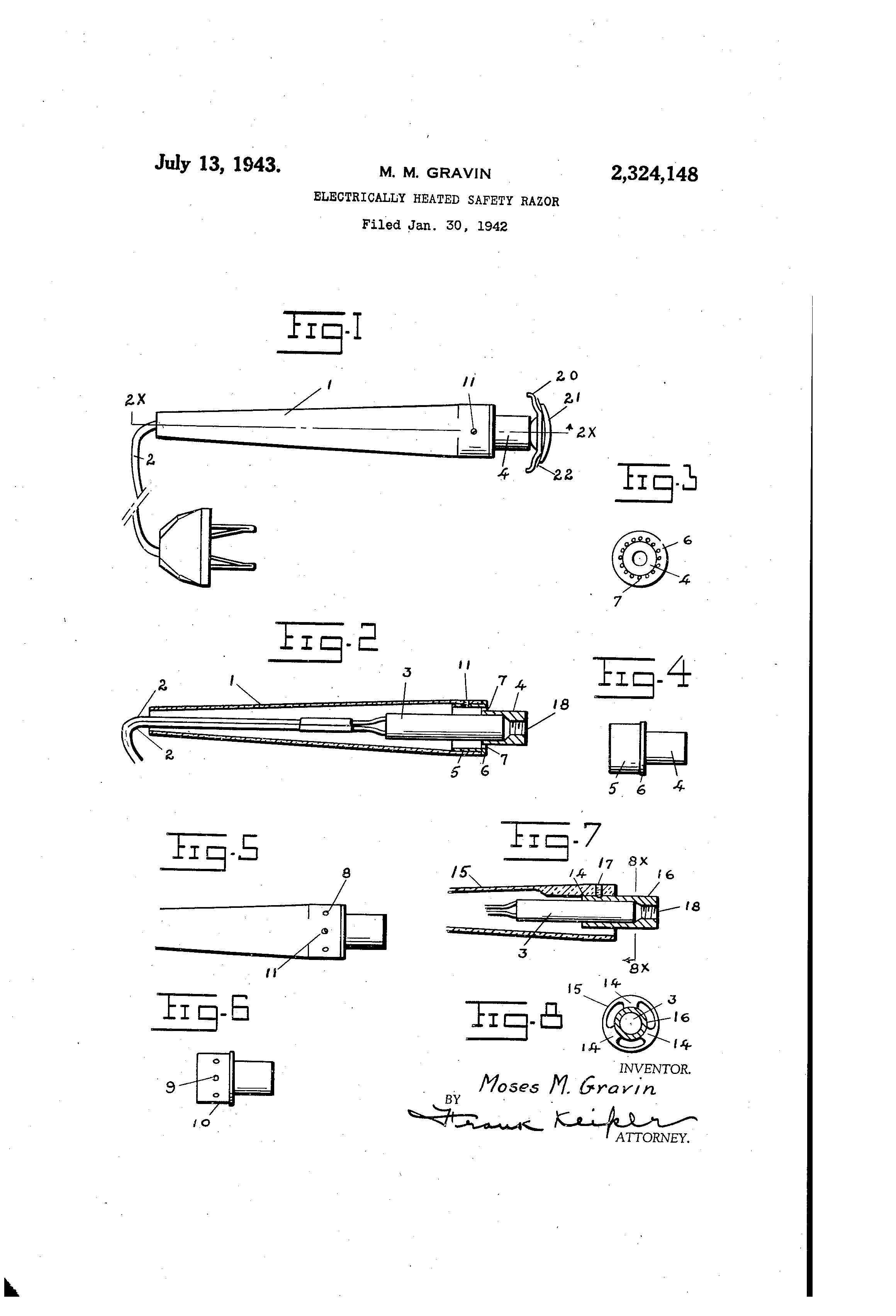 Mr Gravin also took care to make sure the handle didn’t get too hot, by providing an air gap and suggesting using an insulating material for the handle. What he didn’t say anything about was how he intended to avoid corrosion to cause a short in the heating element – leaving the shaver with a potential electrical short right next to their face…

Some men almost always experience burning and irritation of the skin after shaving. To such, we wish to offer some suggestions, which we hope will greatly benefit, if not entirely prevent the trouble.
The most common cause of irritation is undoubtedly a dull razor. If the razor is keen and sharp, the hairs will yield readily to the blade and no irritation will be produced. But if the blade is dull, instead of cutting the hairs easily, it passes over some, slices other lengthwise, and pulls and strains at the roots of all. This necessitates scraping the face over and over again, in order to get a clean shave, and the result is an irritation that perhaps continues until you are ready to shave again. Thus the tender parts of the skin are kept in a state of continual irritation. The remedy is of course, to see that the razor is always keen and sharp.
Another cause that may be mentioned, is chafing of the neck by the collar. If the edge of the collar is worn and rough, and comes in contact with the tender skin, it is sure to make it sore.
Too close shaving is a frequent cause, and those who are troubled in this way will do well to shave over the face but once.
Some of the cheap toilet waters are adulterated, and contain ingredients which undoubtedly produce a bad effect on the skin. In using bay rum or other face lotions, use only the best. If much trouble is experienced, we should advise the use of pure distilled witch hazel, which may be obtained at any drug store. This is soothing to the face and allays the burning.
Sometimes the trouble is due to an excess of alkali or potash in the soap. The best shaving soaps are especially prepared and have antiseptic and demulcent properties, which render them practically non-irritating. After shaving, take care to remove all the soap from the face; for during the process, the lather has been worked into the pores of the skin, and only by means of a thorough washing can it all be removed.
Irritations resulting from constitutional disease, or impurity of the blood, should, of course, be treated by a physician.
Some men are more subject to irritation of the skin than others. Those who have a thin and tender skin and a heavy and stiff beard, are especially liable, but with care, even these may prevent most of the trouble.

Just as true today as it was 110 years ago.. a few observations and comments:

An injector is one of those things I want to try at some point, but it seems that they are harder and more expensive to get hold of than good old DE’s or even out of production SE’s… but if Mr A F Terenzi’s invention had taken off back in ’58, they might have been a lot more common these days.

Taking advantage of the tab that sticks out the side of a dispenser of injector blades, he came up with a simple, seemingly easy to manufacture injector head that allowed the shaver to use the dispenser as a handle. 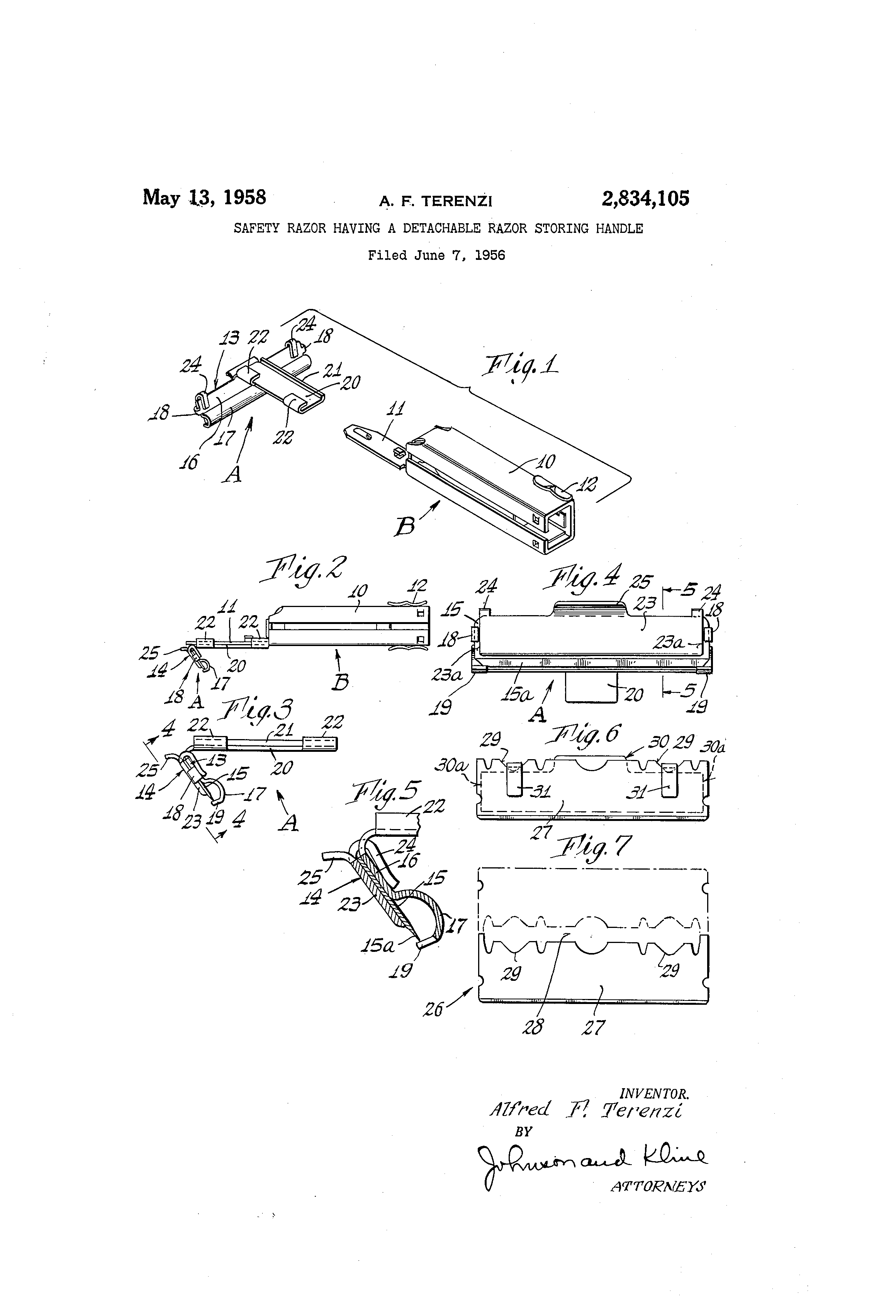 In the inventors own words, this addressed

the need for an economical razor to take the place of one forgotten or lost in transit or while travelling or when needed, particularly when unexpectedly called away from home or for use in guest rooms, hotels, motels or the like.

In addition, the inventor pointed out that such a razor head would be semi-disposable:

It is a shame this invention didn’t take off… I would much rather have found something like this in my hotel room than a cheap, plastic disposable, and it would have made a handy, compact travel razor.

I keep coming back to the free book Shaving Made Easy, since it’s both a fun read in it’s old fashioned way and I learn something new.

Today I was looking up what the author had to say about mirrors;

Position of the Mirror.

The mirror should hang between two windows if possible, so that when you look into it the light will fall directly upon both sides of your face. You will then be able to get a good reflection of either side. Remove the collar. To prevent soiling the shirt, place a towel around the neck in an easy, comfortable manner, pinning it at the side.

The importance of good light aside… remove the collar?

Turns out that a well dressed gentleman a century ago not just shaved in his shirt, but said shirt had a detachable collar like this one:

The upside was that the collar could be kept clean and well starched, which apparently was the Done Thing for a respectable gentleman at the time… so well starched in fact that the Norwegian (as well as Danish and German) term for a detachable collar was “Father murderer” – the idea being that the stiff edge could slit your throat if you turned your head around.

While we might still slit our throats with out razors, at least our shirts aren’t going to be the end of us these days…