The Crabtree & Evelyn was one of the first soaps I bought after getting into traditional wetshaving, based mostly of the reviews available on the Norwegian webshop I bought it from. Yes, I bought this before I discovered the wide range of inexpensive hobbeist-retailers who shares my passion for a good shave – but I don’t regret buying it even at the higher price I paid.

C&E have a fair-to-decent reputation online as far as I can tell – overall good soaps that smells and shaves well. It isn’t as moisterinsing as Mike’s soaps, but it’s somewhat unfair to compare the two – one is machine made with a slightly scary list* of ingridients, the other is made by an artisan. The C&E Sandalwood comes in a nice wooden bowl though, so that’s a definite point in it’s favor.

The scent of the C&E Sandalwood might not be everyones cup of tea, but I rather like it myself. If you like natural and slightly old-fashoned scents – and lets face it, many wetshavers do – you’ll probably like the scent just fine. Building lather is easy with the C&E soap, every single brush I own does a great job of it. Like most other soaps it’s important to add enough water, but once that is taken care of the resulting lather does a pretty good job of providing cushion and glide.

Where the C&E Sandalwood fails is providing moisture; it does a better job than some other mass-market soaps I could mention, but falls well short of the Golden Standard**. It is heads and shoulders above anything that comes out of a pressurised can though, andfor those with dry skin a proper moisturising aftershave will fix any lingering dryness.

If you can live with a soap that don’t moisturise too well, and you like Sandalwood, you could do a lot worse than picking up a tup of Crabtree & Evelyn Sandalwood Soap.

A pretty nice-looking one too, even if I would prefer not having the screw in the top.

More details – and perhaps just as important, the files you need to print one – over at Thingiverse. 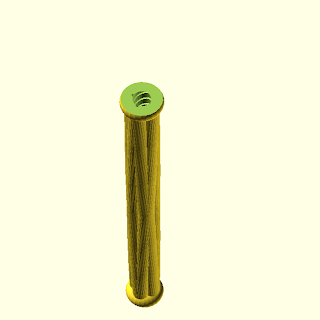 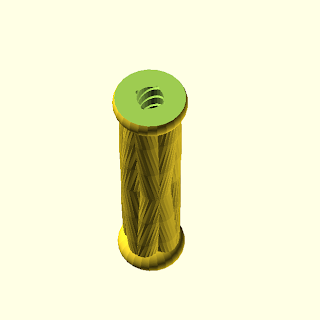 The handles are rendered from the same parametric file – the inner spirals is an attempt at making make-shift screw threads.

Gotten a pretty bad cold – not feeling for slicing myself open if I cough, I just have to deal with not shaving…

With my last order from Mike’s Natural Soaps, I picked up an Orange & Black Pepper Shave Stick.

Basically, everything I said when I reviewed Mike’s soaps holds true for the shave stick, except it being a stick. It is worth noting that Mike’s is a fairly thirsty soap, so you might want to pick a brush that holds water well for face lathering.

Bottom line? Mike’s great soap in a more portable format – how can I not recommend it?

Slightly rushed this morning, but still a DFS.