One of my treasured vintage razors currently in my rotation is my Micromatic Clog-Pruf, which was a variation of the Open Comb Micromatic that dates back to 1930. And here I have stumbled over what very much looks to be the patent for the Micromatic, based on inventor, assignee and how the patented razor looks and works.
In late summer of 1929, Mr Godfrey Dalkowitz filed – on behalf of the American Safety Razor Corp – a patent for a razor…
…of the type wherein the blade is pressed against fixed front stops, which allows adjustment of its shaving edge to a predetermined position with respect to the razor guard, to insure a proper shaving action notwithstanding expected dimensional variations in blades employed.
In other words, a razor of the GEM and EverReady type1 using single or double edged blades. The patent also mentions in passing US patent #13739,280, which I briefly looked at a while back, to highlight what blade the razor was intended to use. To me – at least – one of the defining featueres of the Micromatic when compared to the earlier GEM and EverReady razors is the fact that it is a twist-to-open design, which is in sharp contrast to how earlier razors opened and closed the bear trap style top cap. As the patent text puts it:

It is thereafter necessary for the user merely to rotate the control member 46. This advances the pin 39 and the cam 40 upwardly against the cam surface 37 and initiates a rearward movement of the rack 35. During such rearward movement, the pinion 34 is moved in a counterclockwise direction as viewed in Figures 3-8. During the initial rotation of the pinion 34, the cover is caused to swing downwardly onto the seat from the positions of Figures 3 and 6 into those of Figures 4 and 7, respectively. The bladeengaging members 44 thus enter the respective cut-outs or recesses 69 and 70 and engage the abutment shoulders 71 and 72, the members 44 passing downwardly into the cut-outs 54 and 55 of the blade seat 20 but being completely out. of engagement with the blade seat 20.
During a further adjustment of the member 46 and a consequent continuation of the rearward movement of the rack 35, the cover 15 is caused to advance along the seat 20 in a substantially edgewise manner from the positions of Figures 4 and 7 to those of Figures 5 and 8, respectively. During this edgewise movement, it is to be noted that the front edges 58 and 59 of the links 30 and 31 move away from the ridges 56 and 57, respectively; or, rather, the ridges move forwardly away from the edges 58 and 59.
This edgewise advancement of the cover along the seat causes a similar advancement of the blade 66 and forces the operative cutting edge 67 against the abutments or blade stops 23.

Clear as mud – but it boils down to that a clockwise rotation of the knob (46) pushes the plunger (39) up, which forces the cam (37) backwards. This operates the rack and pinion gear (53 & 34), which closes the lid (50) and at the same time pushes the blade (66) forward against the blade stops (23). Piece of cake!
And to open it up again… well, unsurprisingly all you have to do is to rotate the knob in the opposite direction. 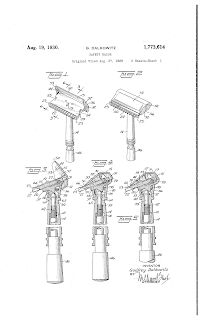 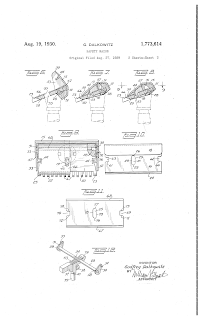 Unlike so many of the patent I dig up and snark at, this patent for the Micromatic has stood the test of time; while the razors may not still be in production, there is a great many shavers out there who still enjoys the smooth shave of a GEM Micromatic.

1) Both brands owned by the American Safety Razor Corp, after their merger in 1906.