We might not think about it today, but those of us who uses vintage razors dating to before the mid 1930’s are actually using them with a blade they were not designed for – but the blade we’re using was designed to be compatible with them. And while the blade shown in this advertisement that ran in the June 1930 edition of Scientific American isn’t identical to the blade we know and love, it’s more than halfway there… Gillette just needed a lawsuit and a messy corporate merger with the American Safety Razor Company to get all the way there. 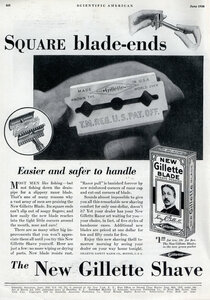 As an aside, this blade is probably the one covered by US patent US1850902A, filed in 1929. I might go into details on that at some point.