Razor blades – by which I mean the traditional double edged blade – is flexible. This is because it’s made out of thin steel, even thinner now than when King Gillette first though them up.1 But flexible blades needs a rigid holder – better known as a safety razor – and as we all know a razor costs money up front. Imagine how many more blades you could sell if the holder – the razor – was significantly cheaper?
This seems to have been the logic behind the patent that Alfred W Proctor filed on behalf of the Gillette Safety Razor Company in 1912. In the words of the patent text:

This invention relates to razor blades of a type now widely used and made of thin sheet steel, as distinguished from forged blades. The facility with which such blades can be manufactured because they do not require forging in order to bring them to shape and because many of the grinding processes incident to the production of a forged razor are unnecessary, has brought them into wide use. Blades made from such thin sheet steel, however, have an inherent flexibility which requires, or at least, makes it desirable to employ With them a holder which embodies a backing, this holder operating to support the blade and impart a certain degree of rigidity to the cutting edge. Such holders are however expensive to make and are undesirable for various reasons.

The holder that supports the blade and imparts a certain degree of rigidity to the blade that Mr Proctor refers to is – as all of you probably realises – the actual razor itself. Personally I cannot see the razor being undesirable for any reason, but it’s certainly true that the double edged blade requires both a bottom plate and a top cap to hold the blade securely and to prevent the blade from vibrating and chatter.
So how did Mr Proctor plan to make the Gillette safety razor – which had been on the market for less than a decade when this patent was filed – obsolete? By making the blade stiff enough to do without the rigidity of the holder – ie.: the razor – much like a straight edge razor. Not by making the blade out of thicker materials, but making it thicker by putting ribs or ridges in it.

For the exact same reason that an I-beam is stiffer than a plate, a blade with ridges is stiffer than a blade without.2 And if the blade is stiff and rigid, you can do without the complex holder – that is; the razor. And thus we end up with the invention shown in the patent drawing: A blade with ribs arranged to make it stiff both along it’s length and breath, and a razor that was little more than some bent wire.

The blade may be used in a wire frame such as C which operates merely as a holder and does not impart any appreciable degree of support to the blade. 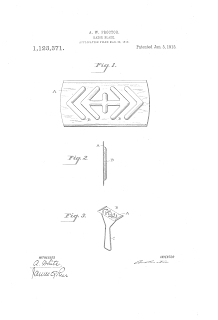 I think that when all is said and done we ought to be happy Gillette didn’t go down this road, since we would have missed out on so many fun and wonderful razors in the last century.

1) For more details, see my previous blog post on how old razors shaved back when new. The quick summary is that modern blades are half as stiff – or twice as flexible – as the original blades.
2) For the technical details, read up on Euler–Bernoulli beam theory, also known as engineer’s beam theory or classical beam theory. The quick, oversimplified summary is that the taller the web (or the ridges, in the case of this patent) the stiffer the beam (in this case; blade).