Morton G Bunnell had quite a few patents to his name, but only two razors – and only one of those got assigned to Gillette Co at some point.  I think it’s a quite interesting patent, for several reasons.

For starters; it is a patent for a single edge razor – with the patent filed back when Gillette was just getting traction with the double edged blade.
Secondly; it’s for all intents and purposes a single piece razor, although calling it a twist-to-open is stretching the definition a little – or rather a lot.
And thirdly; it’s a patent for a razor without a top cap.
The patent was filed in 1906, but was in limbo for several years until it was finally granted in 1913 – and I have no clue what caused the delay. 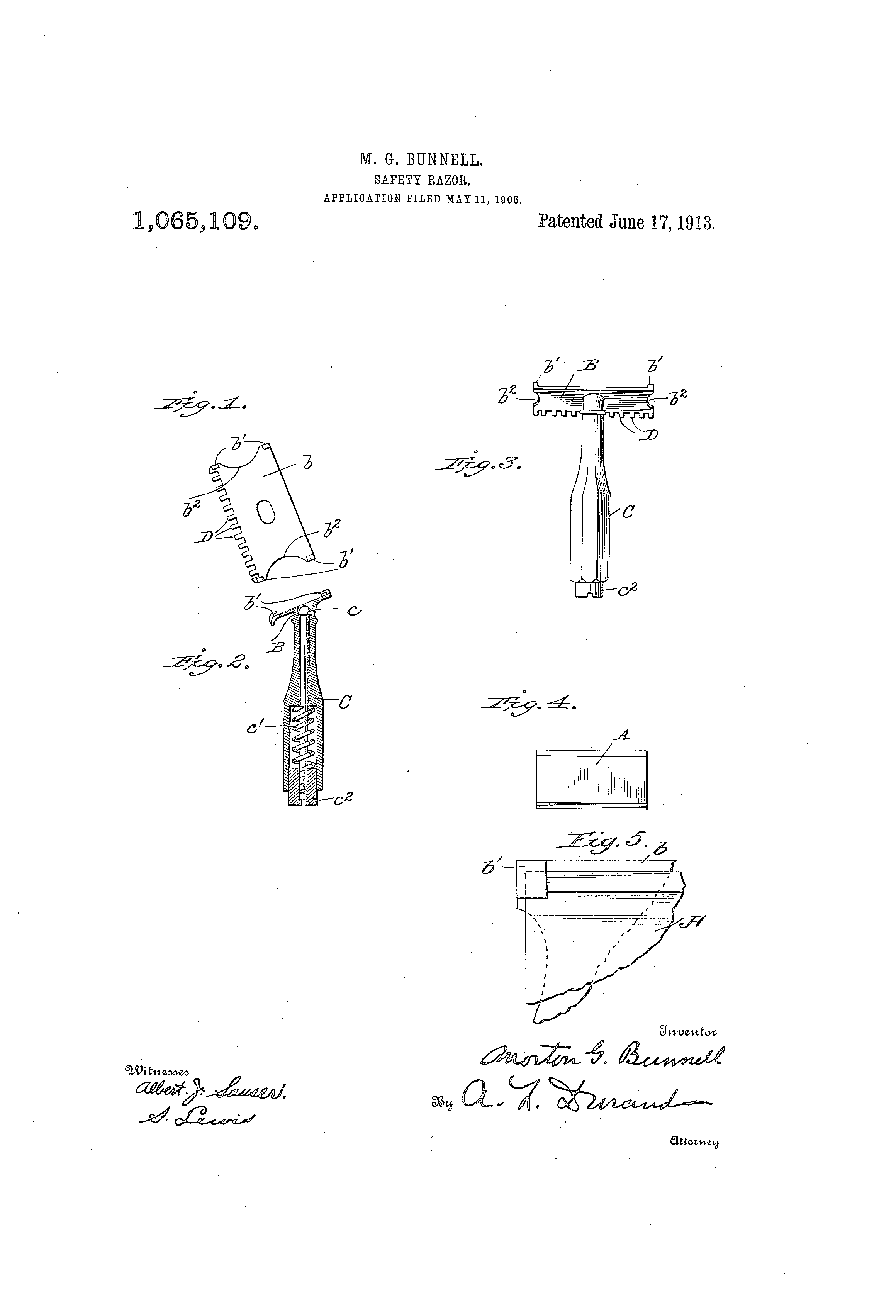 The razor is – as can be expected from a single piece, single edge razor – deceptively simple. A handle, containing a spring loaded plunger with a knob on the end to ain in blade removal. A base plate, angled, semicircular cuts in the sides, with a comb on one side as well as a shaped lug in each corner for holding the blade. Blade was inserted and removed by utilising the springiness of the steel, bending it to slip it in under and out from the corner nubs.
Or to quote from the patent text:

…a flat, rectangular, flexible blade having two cutting edges and four corners. The blade is sufficiently flexible that it may be compressed endwise between the thumb and forefinger.

The holder-portion is shown comprising a plate having a flat seat for the blade. Four overhanging lugs, one for each corner of the blade, are shown carried by the plate-portion of the holder.

The holder has the usual guard.

…the blade to be compressed endwise between the thumb and forefinger to such an extent that the ends of  the blade will assume a position inwardly of’ the overhanging portions of the lugs at the respective ends and the blade-caused to buckle or hump up from it’s seat and its corners pass inwardly from under the overhanging portions of the lugs and thus be disengaged, from the same. Thus the flexibility of the blade constitutes the expedient by which the blade is inserted and removed…

As a means of starting the upward bending of the blade, the handle is provided internally with a plunger held normally down by a spring. The lower end of this plunger projects at the lower end of the handle. A slight upward pressure on the plunger is sufficient to start the blade and allow it to flex under the pressure of the thumb and forefinger.

Interestingly enough the patent text states that the blade should be double edged, even if it don’t touch upon why. While the ability to turn the blade around and thus have it last twice as long is an obvious reason, I suspect the real reason is that Mr Bunnell intended to use slightly modified Gillette DE blades; squared off instead of rounded edges is the only real change, and there is no reason why Mr Bunnell’s razor couldn’t be slightly changed to accept blades with rounded edges instead of flat. The presence of the two additional holes wouldn’t mean nothing to the operation of the razor. thus allowing this razor to piggyback the infrastructure Gillette already had in place to support their DE razor.

I see no reason why this razor couldn’t be manufactured today, for modern DE blades – in fact the indented corners of the modern blades could actually make it easier to secure the blade under the lugs. The real question becomes; would you want to shave with a razor with no top cap?