Another contender for the first twist to open and adjustable razor? Lets hear the inventors own words:

The main inconvenience of safety razors of what may be termed the Gillette type where the blade is clamped between a back piece and a guard or clamp, lies in the fact and that in the only practical form of this razor which has appeared on the market the holder has to be taken entirely apart to insert and adjust or remove the blade.
My invention pertains to an improved form of holder wherein the various parts are so connected together that they never are detached one-from the other in the ordinary use of the razor. A This is due primarily to the fact that what may be termed the handle and the back piece are made in one piece, the clamp mechanism being attached thereto in such a way that the clamping operation may take place by the manipulation of the parts without their separation.

While I’m not inconvenienced by the fact that I have to take a three piece razor to pieces to replace the blade, I must admit that a twist to open razor is convenient – and Mr Edmonds’ description sounds like a twist to open razor to me. Another interesting morsel when it comes to this patent is the fact that it’s listed as filed by and assigned to Gillette Co LLC… while the filing data might be wrong, it strongly suggest that Gillette bought the patent from Mr Edmonds, which would make it the earliest twist to open patent held by Gillette I’m currently aware of.
On to the invention proper: 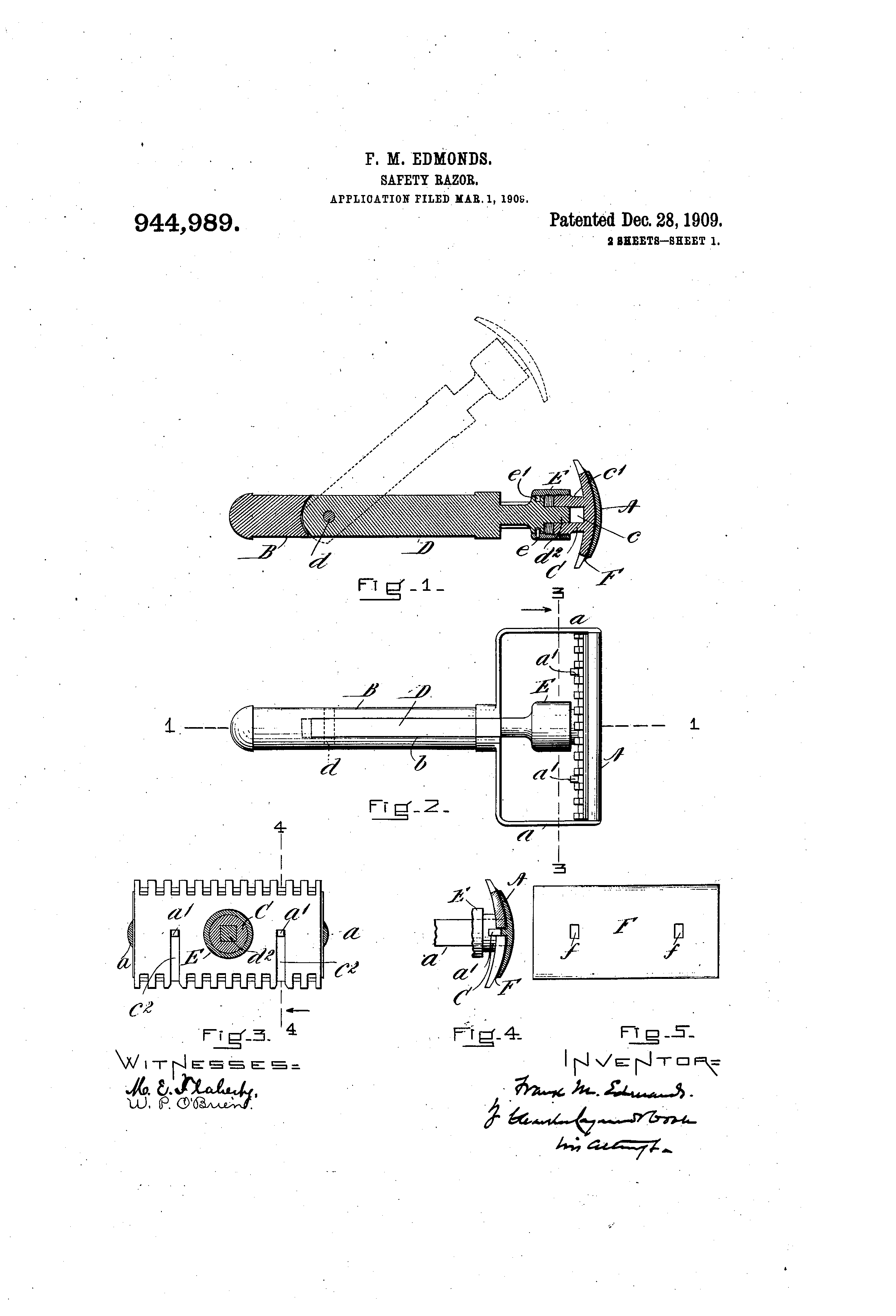 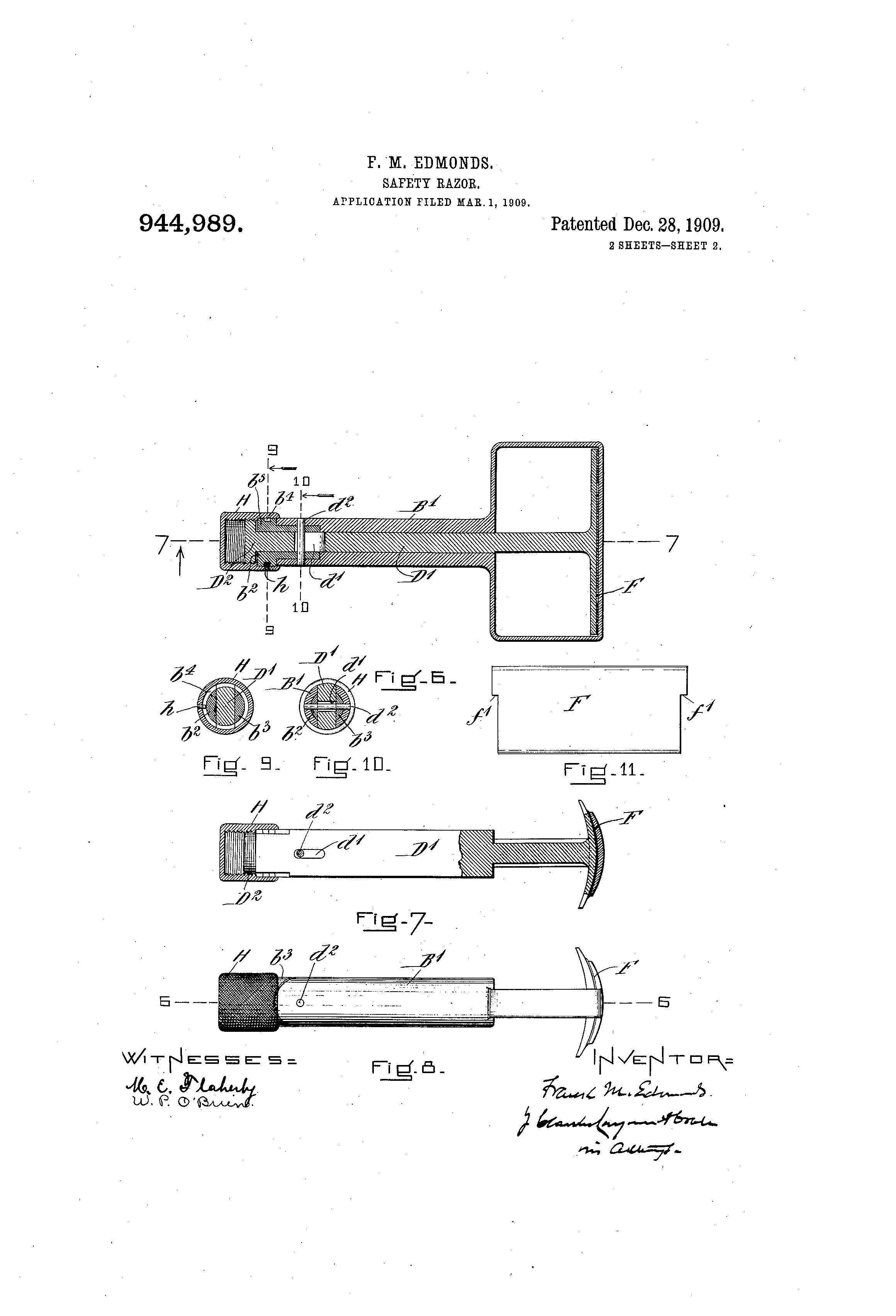 The invention is – in hindsight – simple enough; the base plate is mounted on a rod that can be moved up and down, the top cap is connected to a split handle with a yoke, and the rod run between the split handle. A knurled knob with a small plunger is attached to the handle with a split-ring, and when turned move the rod up and down. There are a spring (or a couple of small springs) between the base plate and rod to allow a certain degree of tightening up, and the base plate have pair studs for a Gillette three hole blade, and the top cap have slits for the studs to slide into. The patent also claims that the knob could be used to “adjust” the razor, much like you can “adjust” a three piece razor by tightening the handle more or less. A simple idea, but a complex execution to make it work.
Or as the patent text more or less explains it:

In a safety razor, a handle, a back piece fixedly mounted thereon, a clamp, a pivoted rod and means whereby said clamp may be adjusted thereon toward and from said back piece, said rod being adapted to be swung out from its clamping position with relation to said back piece to expose said back piece for cleaning and for the reception an delivery of the said blade, as set forth.

In a safety razor, a handle, a back piece fixedly attached thereto, a rod mounted in said handle, and a clamp, and means for maintaining the clamp in with said position, said means comprising a shank and a stud attached one to the rod and the other to the clamp, said stud being angular in cross section and said clamp containing a clamp position to register back piece when out of clamping clamp may be adjusted toward and from said back piece, as described.

Easy, peasy… and probably more expensive and fiddly to machine than a simple three piece razor, which may be part of the reason Gillette to the best of my knowledge didn’t put this patent into production.
Still; the patent offers a very early glimpse into the development of a one piece razor, and one that Gillette found it worthwhile to purchase. This was also as far as I can tell the only razor that Mr Edmonds placed a patent for; his other patents being for self closing fire doors and a dip stick for gas tanks.