I don’t care where you are; today is Norway’s Constitution Day – so happy 17th everyone! I hope you enjoy the day regardless of who and where you are! 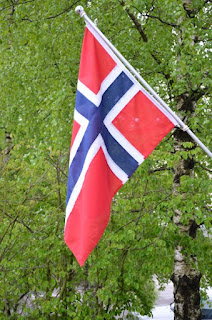 A bit more explanation:
For those few who don’t know it yet, the Seventeenth of May is Norwegian Constitution Day! We got the the oldest single-document national constitution in Europe – the second oldest in the world – still in continuous force… Go us!
For those a little shaky on early 19th century Norwegian history, the story basically goes as follows: After the middle ages Norway found itself in a union with Denmark (Sweden was originally part of it too, but choose to bail out for various reasons). During the Napoleonic wars, the British decided to steal the Dano-Norwegian fleet (being one of the very few fleets who they considered a threat), thus forcing Denmark-Norway into the war on Napoleon’s side. And when Napoleon lost, the Powers that Be – or rather Was – decided that Norway should be handed over to Sweden in 1814, to compensate them for their loss of Finland (which Russia had grabbed back in 1809, if my memory serves me correct).
Needless to say the Norwegians wasn’t too thrilled about this, a reaction thats pretty natural when you consider that the Swedes had a history of attacking Norway stretching back a few hundred years at this point. And if Norway couldn’t get back into a union with Denmark… the logical steps to take was declare our Independence, write a Constitution and set out on our own!! Woot!! Go us!!
The constitution that was drawn up and signed at Eidsvoll on Seventeenth of May 1814 was a radical document for the time… drawing on the French constitution from the French Revolution, as well as the US Constitution and Bill of Rights. Based on the guiding principles of Freedom, equality and brotherhood it separated the Executive, Legislative and Juridical powers, established the freedom of speech and curtailed the powers of the King fairly severely. Pretty hot stuff, considering the time it was written.
Sweden on the other hand wasn’t too thrilled by this development…. and as they had done more than a few times in the centuries leading up to 1814, promptly invaded. The Norwegian Army was understaffed, untrained and undernourished after years of British blockade of Norway still put up a pretty determined fight, giving at least as good as they got and holding back the Swedish advance long enough to stave off the possibility of a forced surrender.
After negotiations held in Moss (my home town), Norway and Sweden entered a union; but it was a union of two independent nations under one king, and not – as the Swedes had no doubt intended – a union making Norway a part of Sweden. Norway retained it’s own government, it’s own armed forces and most of the other trappings of an independent country – only sharing a king and forgein policy.
As the years went past, the Norwegians started to celebrate the Constitution Day, at least in part in order to rub it in with the Swedes that Norway was in fact it’s own country. This didn’t go over too well with the Swedish, resulting – among other things – in the infamous Battle of the Square (17 May 1829), in which mounted cavalry and light infantry routed a more or less peaceful demonstration.
Later during the 19th century things calmed down a bit, even if Norwegians celebrated the Seventeenth more than ever. After a few years the tradition of children’s parades was initiated (originaly started on the basis that the Swedes wouldn’t sink as low as to attack children), and has become an enduring symbol of the day in Norway.
While we’re no longer in a union with Sweden – we broke out of that in 1905 – we still celebrate the 17th as Norways Birthday… and like most birthdays, it’s mostly about the children. Childrens Parades, ice cream and hot dogs, flaggs all over the place… it’s been described as the day Norwegians stop acting like Norwegians in order to celebrate that we’re Norwegians.
So Happy 17th to each and every one of you!!