Short version, bottom line up front: Good soap, get some if you can find it.

The long version… well;
A little while back I was contacted by Pereira Shaving – a Portuguese soap maker – who asked me if I would like to try some of their products. Always up for a new experience, I jumped on the opportunity for a “sample” of Pereira Shaving Cream with Activated Charcoal.
Shipping from Portugal took a little over a week, but that is only to be expected when crossing multiple borders – double so considering the fact that Norway is outside the EU and every package have to go by the customs warehouse even if there is no custom to be paid.
I did spend some time looking up information on Pereira Shaving before the soap came to me, but sadly did not find much in English apart from the business being Portuguese, working from vintage recipes, had some lovely presentation of their products, and a rather interesting looking soap and shave cup combo with a brush rest. Also they have some strops on offer, but someone using a straight might be better suited to offer comments on those. Their beard combs looks interesting though… however, we’re here for the soap.
First a few pictures I want to share though… keep in mind that I expected to receive a sample; which I usually take to mean a small quantity enough for maybe a week of shaves. This is what I received: 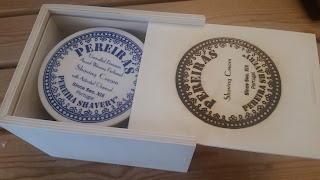 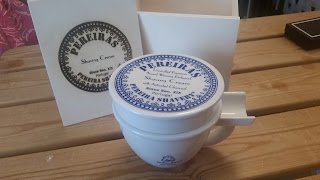 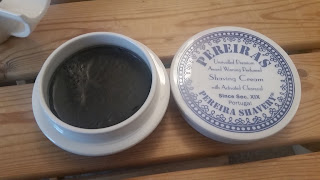 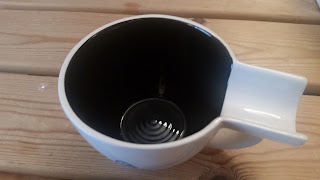 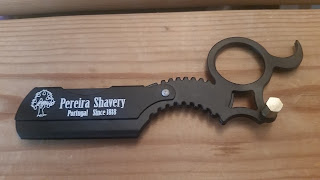 It seems that Pereira Shavery have a somewhat different idea than I had of what consists a “sample”. They were kind enough to send me not only a full size puck, in a lovely ceramic container with the matching shave bowl with brush rest – which by itself is above and beyond what I could reasonable expect – but also a very nice looking shavette.
Presentation is – as can be seen from the photos – absolutely top notch. The soap bowl and lathering cup are both ceramic, and the soap will nest in the lathering cup when not in use. Size wise they both fit well in my hand and while the cup is slightly smaller than what I consider ideal for making the lather, I do recognize that if it’ been any larger it would been awkward to hold. Like most things in life it’s all about compromises, and I can easily live with a slightly smaller bowl since I tend to face lather.
I’ll write up a separate review on the lather cup and the shavette soon; the cup simply deserves it’s own piece and the shavette I’ll have to get comfortable about using first as I’ve never used one before.
If you’re not expecting it a black soap can be slightly unsettling…. but that is just the charcoal. Activated charcoal has been used for ages to clean and detox; my favourite facial scrub have activated charcoal, my air purifier have an activated charcoal filter, as do my military issue respirator. For those who worry that it’ll turn your face black, rest assured that it lathers almost white as any other soap.
Apart from the charcoal there is nothing in the soap one would not expect to find in shaving soap. The scent of the soap is very pleasant; a fairly complex but light flower scent that passed muster with my Better Half with flying colours. I found some suggestions online that the scent could be improved, but I’m inclined to disagree – to my nose it’s fine as it is.
So how does it shave? That is the question that really matters when it comes to a shave soap, is it not?
The first shave was – and this is a good thing – blissfully normal. The lather has a ever so slightly grey tint from the charcoal, and the scent loosened up a bit and embraced me as I was removing my stubble. Facial feel wasn’t too dissimilar to the Cold River Soap Works’ Glide, which is a recent favourite of mine. Since I had bloomed the soap and have fairly soft water, about half a minute of loading was plenty enough for two passes and lather left over. 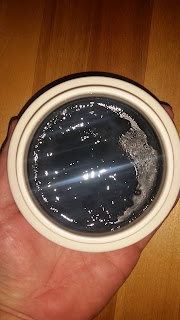 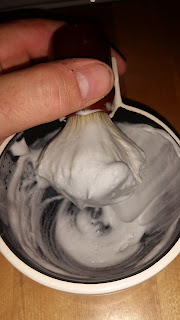 The post shave feel of the first shave was also a good one, with no noticeable drying out of my skin. As a side note the floral scent of the Pereira works very well with the Proraso Wood & Spices. 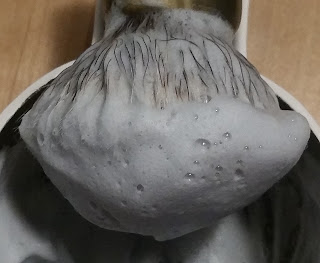 Further shaves reinforced the positive first impression, even more so after tweaking the ratio of water to soap. The Pereira Shavery shaving cream has ever so slightly less cushion than the CRSW Glide, but is also slicker. It’s a fairly thirsty cream in my opinion, much in the same way I find that Mike’s Natural to be a thirsty soap. Post shave feel continued to be good, and while I’m not sure if the activated charcoal did any good it certainly didn’t do any harm. 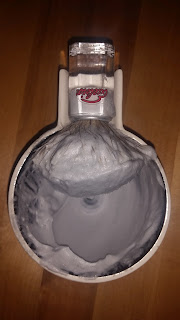 A quick summary of my findings and opinions: 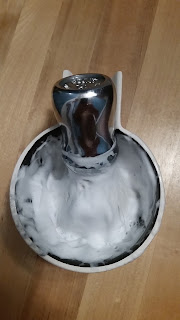 Do I consider the Pereira Shavery Shaving Cream with Activated Charcoal a good shaving soap? Indeed I do, one of the best I’ve tried so far.
Would I buy this soap with my own money? Most assuredly, if I can find a place to order it.
Can I recommend this soap to others? Most assuredly if they can find it, it’s simply a very good soap that I feel most people can enjoy. 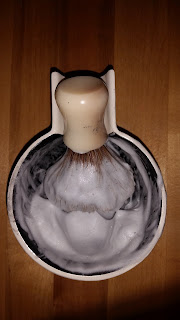 Through a friend on the Shave Nook I’ve learned – later confirmed by Pereira – that this soap comes in four different form of packaging; The version with the ceramic container and shave bowl that I received, a version of just the ceramic bowl, an aluminium container, and a recent addition is a plastic container mimicking the ceramic one (but probably much lighter in weight).

Personally I feel that a refill puck could be a nice addition to the range, for placing in a ceramic bowl when empty – the bowl is simply too nice to throw away. 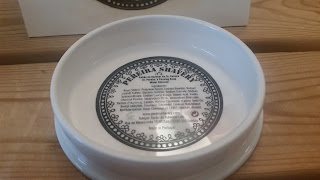 So far I’ve not been able to locate an online seller of this soap and related products, as best I can tell based on a post I found at a Portuguese shave forum and on Pereira Shavery’s website they are sold at a few physical stores in Lisbon and Porto. Hopefully this will change sooner rather than later – at least before I run out of this soap – since travelling to Portugal for a refill would be inconvenient at best.

On PereiraShavery.com they say that their soap will be available at Amazon UK “soon”, but I do hope that more specialised online shave shops will start carrying too, since I prefer spending my money with the smaller niche stores for my shaving needs. In the meantime Pereira Shavery informed me that interested shavers can contact them directly via the email on their website to order direct from the source – and if you do that before the 31th May 2018 and use the code WW10% they will give you a 10% discount. More details on the discount in another post.

1 thought on “Review of Pereira Shaving Cream With Activated Charcoal”