Today is VE day, so even if the story originated in the Great War and not the Second it’s oddly suitable.
World War One, known at the time as the Great War or the War to end all Wars (yeah, right…) was the first war when clean shaved faces were required. The reason was twofold; personal hygiene in the trenches, and ensuring a proper gas tight seal on the respirators. Up until chemical warfare became an issue, facial hair was often encouraged and sometimes required since follicular fashion statement was all about virility and aggression,* which was seen as good military qualities.  British regulations from 1860 to 1916 stated that:

The hair of the head will be kept short. The chin and the under lip will be shaved, but not the upper lip…

So yeah.. shame on you if you couldn’t grow a decent moustache I guess.
Anyhow, I digress… so such was the state of affairs up until the first couple of years into the Great War. On 22 April 1915 the Germans released a huge cloud of chlorine near Yrpes. Cue a rapid development of respirators – starting with simple pads tied in front of the mouth and ending with models that almost be mistaken for modern ones – and the end of facial hair. When the US got ready to get involved in the tussle, the US Army regulations stated that beards were not permitted, and the maximum allowable hair length was one inch. King Gillette got the job of making sure every member of the American Expeditionary Forces was clean shaven.. and the rest is history.

means you have to use these: which in turns leads to this: 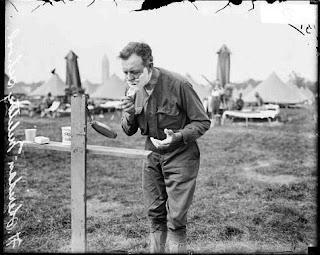 which lead to a whole generation of young men learning to shave themselves and getting used to being clean shaven every day. And that is where we are today… beards come and go, but shaving is here to stay.

*) Same reason men in many non-western parts of the world is expected to have a full beard as soon as they are of age – they are quite literally seen as less manly without it.