Occam’s razor (also written as Ockham’s razor from William of Ockham, and in Latin lex parsimoniae) is a principle of parsimony, economy, or succinctness used in logic and problem-solving. It states that among competing hypotheses, the hypothesis with the fewest assumptions should be selected.
The term “Occam’s razor” first appeared in 1852 in the works of Sir William Hamilton, 9th Baronet (1788–1856), centuries after William of Ockham’s death. Ockham did not invent this “razor”; its association with him may be due to the frequency and effectiveness with which he used it. Ockham stated the principle in various ways, but the most popular version “entities must not be multiplied beyond necessity” was written by John Punch from Cork in 1639.

So what does a philosophic principle have to do with shaving? Read that last paragraph again, and pay extra attention to “entities must not be multiplied beyond necessity”… in short, Occam’s Razor tells us that you’ll only really need one blade (straight, SE or DE) to shave; having two or more introduces needless complexity to the process. 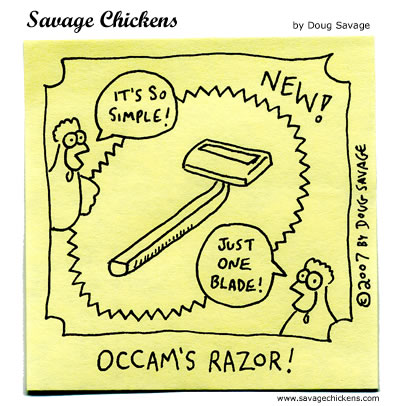