Ralph E Thompson was – as we’ve already seen – a rather prolific inventor of safety razors and associated gear, and he seems to have been one of the central characters in Gillette’s search for an improved, adjustable razor in the early 1930’s. As the preamble for the patent puts it:

This invention relates to safety razors, and more particularly to means for so adjusting  the razor and blade as to vary the blade edge exposure thereof. Some beards require a considerable exposure of the blade edge if a satisfactory shave is to be secured while other beards require a much less exposure. The ideas of different people vary to a great extent in this matter and, furthermore, the same person may at one time desire a close shave and. at another time a rather rough shave.

So far so good; people have different ideas of how aggressive a razor should be, and people’s needs vary from day to day. Obvious for us today, who have grown up with adjustable razors, but in the context of the time it was perhaps less so. How Mr Thompson made the razor adjustable was very different than the methods we’re used today, and when adjusted it gave the shaver an aggressive and a mild edge to shave with.. useful, perhaps, in that you could do the first pass with one side and touch ups with the second.

In accordance with my invention, I so mount and preferably pivot a stud I to the cap that movement thereof causes such a relative transverse adjustment between the blade and guard as to. secure the said variations in blade exposure, the handle being adapted to cooperate with the stud to clamp the parts in the adjusted positions.
In the accompanying drawings I have illustrated certain specific embodiments of my invention but it, will be understood that the invention can be otherwise embodied and that the drawings are not to be construed as defining or limiting the scope of the invention.

So by tilting the base plate and cap in relation to the handle, the blade gap and blade exposure could be adjusted – as can be seen in figures 4 and 6 on the drawing. A potential improvement to Mr Thompson’s invention might be to flatten the very top of the cams (labelled as #32 in the drawings) slightly, so that the neutral position could easily be found. 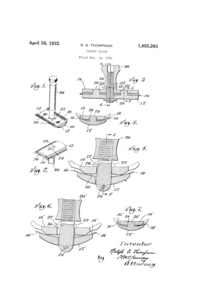 The patents is – naturally – long since expired, and thus available if any daring razor manufacturer wishes to market out a truly unique, infinity variable adjustable razor that gives you a mild and aggressive shave at the same time.