If your freshly invented razor relies on replaceable blades, you better come up with a way to pack the blades. And that goes double if your blades isn’t perfectly flat, such as the blades for the GEM and EverReady razors.
Enter Joseph Kaufman – of the American Safety Razor Corp – and the patent he filed in January 1907 for how to package a single edge razor blade with a spine. In hindsight the invention is obvious, but it was novel enough in 1907 to be granted a patent. In the words of the patent:

The combination with a safety razor blade having longitudinal shoulders, of a paper slip of much greater length than width and open at the top and having closed ends, the blade being inserted into the slip. the shoulders of the blade resting on the upper edges of the slip and the cutting edge of the blade being a short distance inward from the bottom edge of the slip, and an envelop surrounding the blade and slip, and a retaining and sealing band surrounding the envelop, substantially as set forth.

So in short; a paper wrap around the blade – making the blade as wide as the spine and protecting the edge – and a paper envelope around that. 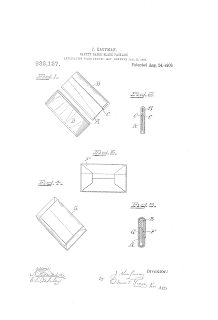 I got some new-old-stock Radio Steel EverReady blades – inherited from a friend of the family as part of a EverReady 1914 kit – and those blades are packet exactly as the patent describes. And when I bought modern GEM blades loose – that is, not in a dispenser – they had the card-stock wrapper around the blade proper. 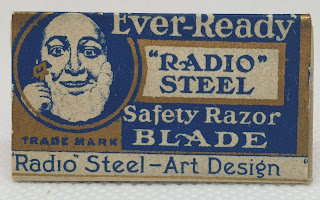 Vintage blade partly out of outer envelope – the card stock can be seen through the inner envelope. 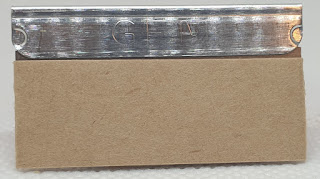 A modern blade with the card stock sleeve clearly visible.
Unlike a lot of patents I’ve looked at, part of the useful improvements in safety razor blade packaging Mr Kaufman got a patent for in 1909 is still in use hundred and eleven years later – it has certainly stood the test of time.

1 thought on “New and useful Improvements in Safety-Razor-Blade Packages,”