The key to making a profit is – broadly speaking – to spend as little as possible on manufacture, while selling for as much as the market will pay. Thus the race for an inexpensive safety razor was on quite early, as can be seen in this patent, filed by Percy R Greist and Emanuel J Boyler in 1913, on behalf of the Greist Manufacturing Company.
As the inventors stated in the patent text, the whole idea was to make it cheap and convenient:

This invention relates to safety razors, and has for its object to provide a razor of this class which may be made at little cost, in that the parts thereof may be stamped from sheet metal, which is efficient in use, and the parts of which may be quickly and conveniently assembled and may be readily taken apart for cleaning.

The two main parts of the razor is stamped and folded in a press, and the springiness of the sheet metal act to hold the parts together. The top cap – for lack of a better term – is integral to the handle, and the base plate doubles as a blade holder and take down button. As far as the actual blade goes, there is no drawing of it by itself in the patent, but it looks to be much like a EverReady blade without a spine. It was inserted into the blade holder from the back when the razor was disassembled. 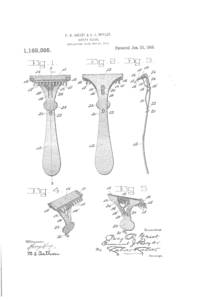 It is interesting to note, by the way, that this is one of the patents cited by Oneblade Inc1 – that is; Tod Barrett, Porter Stansberry, and Mark Prommel  – for their reasonable successful OneBlade razor.