Believe that a shaving stick is just a shaving stick? Think again; because in 1919 Mr Joseph Kaufman of the American Safety Razor Corp – the result of the 1906 merger between the GEM and Ever-Ready companies – filed a patent for a shaving stick with new and useful improvements:

The invention relates to a novel stick of shaving soap embodying several features of advantage. The soap contained in the stick I do not modify, except to supply a first class soap therein, but I combine therewith several features of novelty, one being a central vertical core of cocoa butter or equivalent oleaginous substance, another being an elastic casing which normally incloses the stick and which may be rolled downwardly from the outer end thereof as the stick is consumed, another being a rigid base secured to the lower end of the elastic casing upon which the stick may stand vertically, and another residing, in the preferred construction, in a substantially rectangular outline in cross-section of the stick, the corners of the rectangle being rounded.

And that was just the introduction to the patent text… lets break it down, shall we?
The core of cocoa butter or other oleaginous substance1 was intended to combine with the soap to produce a efficient lather for softening the beard and protect the skin – much like many modern soaps sometimes contain cocoa butter, lotions and other skin softening ingredients. Having it as a core instead of mixed into the soap itself would mean that the fat in the cocoa butter wouldn’t react with the alkaline2 when making the soap.
The use of an elastic casing – Mr Kaufman preferred rubber, but listed pyroxylin3 as an alternative – was meant as an alternative to the then common use of tin foil on shaving sticks. The tin foil – according to the patent text – had a tendency to both fall off in patches and to scratch the face of shavers. Another benefit of the elastic casing was that you could roll it back up, protecting the stick and aiding in preserving the original character of the soap and cocoa butter.4
The rigid base – made from metal, fibre or any suitable material – would be cemented to the elastic casing and both aid the stick in standing up and prevent damage to the lower corners of the soap. Mr Kaufaman regarded – according to the patent text – the base an important but not essential part of his invention.
The reasons to have a square-ish – as opposed to round – cross section of the shave stick was quite simple; it would ensure that you had as much exposed soap despite the addition of the core.5 The fact that the shape also meant less wasted space in each box when you packed the shaving stick for shipment isn’t mentioned in the text, but it was one of the first things that stuck me. 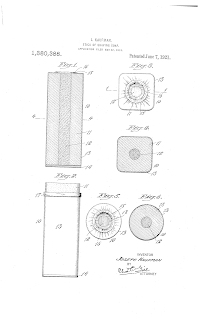 While I would love to be able to buy a shave stick like this today, the evolution of shaving soaps have passed it by… today we have skin improving ingredients in the soap itself, the shave sticks are paper covered instead of foil, sticks tends to stand up by themselves or have plastic bases… but they are still round. A square stick would still have benefits, especially when it came to shipping.

1) Oleaginous; rich in, covered with, or producing oil; oily
2) I.e.: lye
3) pyroxylin is nitrocellulose that is less nitrated than, say, gun cotton.
4) I.e.: stop it from going rancid or drying out
5) “…the space occupied by the core of cocoa butter is recompensed for by the additional quantity of soap contained in the rectangular formation”, as the patent text states it