Long time readers of my blog will – perhaps – recall I posted a quick little post about a home made hair trimmer made with a comb, a razor blade and some painters tape a few years ago. To no one’s surprise this wasn’t a new idea – you can buy a dozen variations in all sort of shapes from Chine – but I found an early patent that seems to be inspired by the top cap of a Gillette razor.
Applied for by Mr Domenico Marrazzo in the fall of 1935, the device was claimed to be for the head as well as other parts of the body.

… a combined comb and hair cutter, wherein the blade is so guarded as to prevent accidental i6 cutting of the fingers and to permit the hair cutting portion to be used as a handle when the comb portion is used as a comb.

So hold one end of the device, and it’s a comb. Hold the other end, and it’s a hair cutter. Hope that you remember which end is which when you brush your hair before going on your big date. 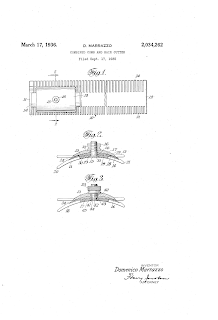 It’s a simple enough idea in hindsight – like most good inventions are – and Mr Marrazzo took care to point out that you could make it from almost anything, ad that it would be usefull for anyone regardless of hair length:

The comb may be made of any suitable material such as hard rubber, bakelite or metal such as aluminum or the like.

Said arcuate portion is somewhat greater in length than the length of the blade 14 and has a convex outer surface 11 and a concave inner surface 13 as shown in Figs. 2 and 3. In order that the device may be operative in cutting long hair as well as short hair, the row of teeth 20 on one side of the comb are preferably longer and if desired, coarser than the opposed row 21 on the other side.

All told it sounds like a useful combination tool for those who like to trim their own hair – as highlighted by the fact that variations on this theme is still for sale.