From time to time I come across patents that I’m sad didn’t make it into manufacture… and the single edge razor Mr Frank Pelosi was granted a patent for in May 1931 is one of them. It just looks, well, nice.
Mr Pelosi didn’t claim that his razor would be the best thing since sliced bread, nor that it would be a quantum leap over other razors… just that it would be, well, simpler and better. In his own words:

…an improved razor of this type which comprises a relatively few parts of simple and economical construction, which permits easy and speedy insertion or removal of a separable blade, and which may be small in size and light in weight without sacrifice of operative efficiency.

It’s was a simple twist-to-open open comb razor, which indexed the blade on a rivet mounted on the bottom plate, while the top cap was made from sheet metal and tightened by a knurled knob on the end of the handle.

…the razor comprises a handle 10 having an axial opening 11 therethrough, a guard member 12 mounted in one end of the handle, a rotatable knob or lock nut 13 at the opposite end of the handle, a lock plate 14 arranged to cooperate with the guard to hold a blade 15 therebetween, and an adjusting. stem 16 extending through the hollow handle and having one end engaging a threaded opening 17 in the nut 13 and its opposite end passing through an aperture 18 in the guard 12 and secured to the lock plate. as by a rivet or pin 19 which projects through an opening 20 in plate 14 and is headed over on the top surface of the plate. The stem and lock plate may thus be moved longitudinally of the handle by rotating the lock nut to secure the blade in working position (Fig. 3) or to separate the plate from the guard member and permit insertion or removal of the blade (Fig. 4). 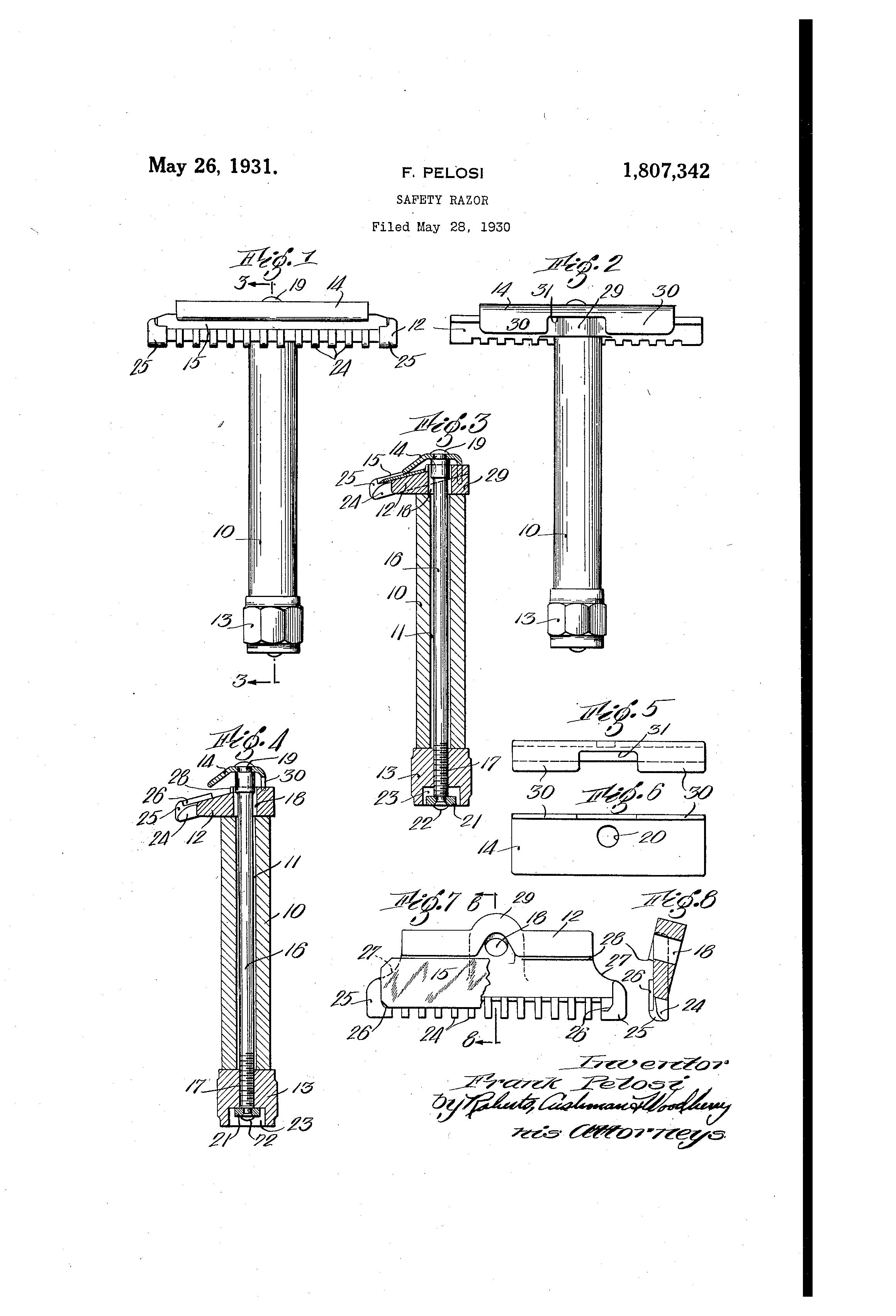 Overall Mr Pelosi’s razor gives the impression of a well though out, workmanlike razor with no frills and only a little thrills. What killed it in the marked was probably the fact that it required it’s own special blades, requiring setting up manufacture of not just the razors, but also the blades.