For a large part of the last century scientists were often seen as heroes – using Science! to make life better in every way*. So it’s no big shock when Johnson & Johnson used a scientist as their eye catcher when they told everyone about their new shaving cream soap in February 1919… this was no ordinary shaving soap – this soap was infused with Science! and the result of careful study and years of research. 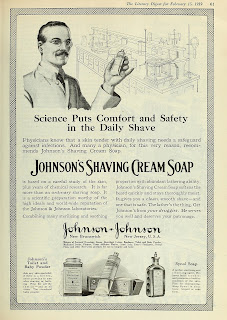 According to the advertisement, it not only gives abundant lather, softens the beard and give a smooth safe, but it has sterilising and soothing properties, is clean and safe – because of all the Science! in it, I guess.
Get it from your druggist, whom apparently serves you well and deserves your patronage.

*) When they wasn’t busy thinking up ways to help us kill each other faster and better**, that is.
**) Which was still Good, as long as it was Our scientists who figured out how we could do it to Them and not the other way around.