Show of hands everyone; how many of you have – at some point – given yourself a nick or cut from a exposed blade tab on a double edged blade? I suspect most of us have done it by accident at least once which is why some safety razors covers the tabs.
Back in late January 1930 – ninety years ago pretty much on the date – Albin K Peterson was granted the earliest patent I’m aware of that covers blade tabs… literally. Mr Peterson had noticed the inherent danger of the tabs, although possible not when he was shaving his beard… to quote his patent:

The Gillette type of safety razor is highly desirable because the blades can be replaced and a sharp blade always had at a small cost. In these days of scant attire for women, they often employ a safety razor for shaving unsightly hair from the arm pits. It has been found dangerous, however, to use the average safety razor, whether the Gillette or other types, because the sharp corners of the blade protrude sufficiently to cut the skin when contacting with a cupped or depressed area, such as the arm pit.

So… body-shaming the ladies in your patent filing? Classy. Anyhow – the invention don’t seem all that non-intuitive to me in hindsight, even if the patent clerk found it novel enough to grant a patent. Mr Peterson’s big idea was just a change to the shape of the top cap, made to include an overhang that covered the blade tabs. Granted; the overhangs were a bit on the large side, curved to slide smoothly in an armpit, but still just overhangs.
Interestingly enough, Mr Peterson also wanted to modify the base plate slightly to ensure a snugger fit with his improved top cap… in his own words:

The guard member consists of a curved body portion 6 to which may be secured, by shaft 2 protruding into the handle 7 and figures 6 and 7. The prongs 9 are shortened just sufficiently to fit snugly within the shields 4 thus, together with the latter, forming a complete housing for the corner of the razor blade. The prongs 8 are preferably of such a length that when the razor is assembled the tips of the prongs will be in a line forming a tangent with the outer surface of the shields 4.

It is, of course, possible to merely reduce the length of the four end prongs of the guard member of the standard Gillette type of safety razor so that it will fit into my improved blade receiving member. Thus by providing my improved blade receiving member with the standard Gillette type of safety razor, the guard member of which has, been altered as above described, the user can alternatively employ the set for shaving ‘said to be adapted to shave any part of the human body without fear of injury thereto. 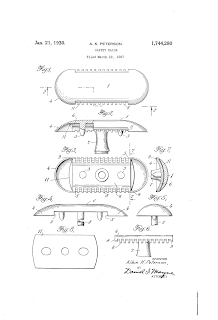 Today double edged razors with covered blade tabs is fairly common, but I’ve yet to seen any with such massive overhangs as Mr Peterson suggested.