In 1920 Mary M McCaffrey filed a patent for a safety razor for shaving armpits – the earliest such patent I’ve found that has been filed by a lady. Like the underarm razor patented by Joseph J Schermack in 1931 – and the Shermac he later manufactured – Mrs McCaffrey’s razor was round, and for a good reason:

To shave hair from the armpit or any depressed portion of the body with the ordinary straight edge safety or. other razor is more or less unsatisfactory, therefore provide a safety razor which will effectively and safely do such work, and to this end use is made of a circular blade so constructed that it may be flexed as desired.

A lot of the patent goes on to describe the special blade – that could be flexed as desired due to a number of  of elliptical openings placed around the centre – and the slot in it that had to be protected with a guard so the corners didn’t cut. Or as the rather verbose wording of the patent text tries to explain it:

Blade 3 is best illustrated in Fig. 4;, and is provided with a slot 6 to permit greater flexing and also with elliptical openings 12 placed radially in blade 3 to prevent buckling when being made and to assist in allowing appropriate flexing when pressure is placed means of screwing handle 1 on stem 5, which flexing is produced by slightly raised circular, portion 16 on head 2 (exaggerated in drawing) fitting into depressed circular portion 13 on cap 4 (also exaggerated) The center of the raised circular portion 16 on head 2 passes when in position over elliptical openings 12 slightly beyond the wide portion of said openings radially placed producing thereby an even flexing of blade 3, and thus eliminating to a great extent the tendency of circular blades to break on the outer edge thereof.

Clear as mud, as many patent texts are, but the drawing is at least easy to understand. 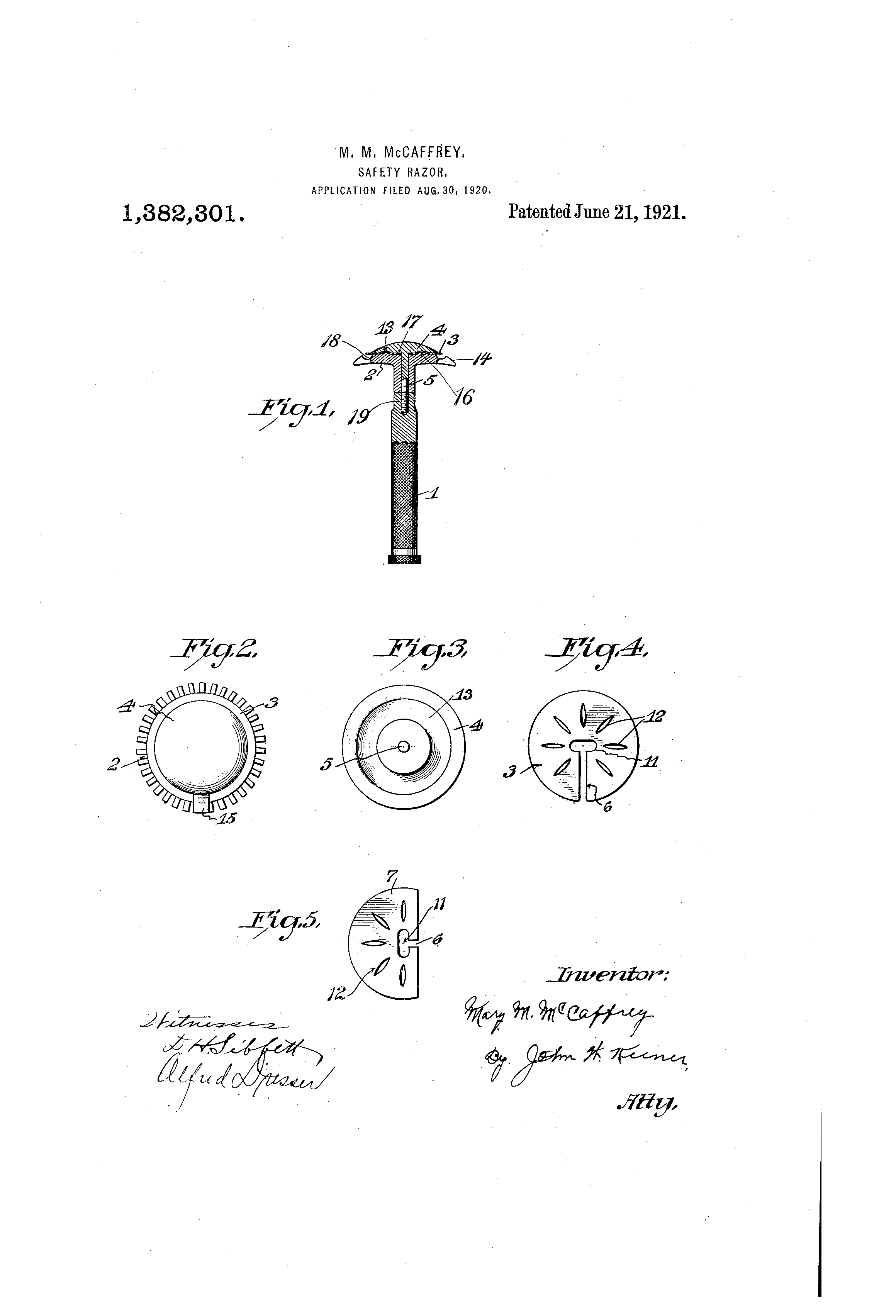 Judging by the apparent lack of success that McCaffrey’s razor, and the blade of the slightly more successful razor later patented and marketed by Shermack, I suspect that the blade of this razor was overly complicated – making the manufacture of the blades complicated and expensive.

For those who missed the last post i made about an old patent, axilla is the anatomical term for armpit.