The use of customer reviews and letters of  recommendation do – possible to the surprise of people who have grown up since online shopping became a huge thing – go back decades, if not centuries. During my meandering online wanderings I’ve found this example from a century ago. 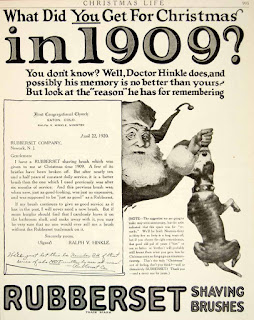 As far as a little searching can tell me, Ralph V. Hinkle was no one special… not famous, at least not outside his immediate area. An Every-man, if you prefer that term, someone other customers could relate to.
There is off course the possibility of the letter being fake, written by the Rubberset marketing department, but would that be any different than today?
As an aside my oldest brush still in rotation is about a decade old too; an Omega 10048 – it shed a few hairs the first year or so, but is otherwise even better now than when I took it out of the box.