Razors shave better over stretched skin, which is why most of us do a bit of facial contortions as we have our moment of daily Zen.
Meyer Eugen, of Wurttemherg in Germany, had other ideas on how to achive the desired tightening of the skin… as he states in the patent he filed in 1961:

When shaving with a safety razor, the skin is usually tightened so as to raise up the hairs relative to the blade to permit them to be cut as closely as possible toward their roots, whereupon the remaining stubs will recede into the released skin. In order to attain this result, numerous designs of safety razors have already been proposed. Thus, for example, the comblike guard in front of the razor edge of earlier safety razors was replaced by a beaded friction bar which, however, was too smooth and exerted too little friction upon the skin.

I never figured the point of the safety bars or comb was to provide friction… I’ve always believed the point was to stop the blade digging into your cheek and taking off the outer layer of skin – along with the deeper layers, flesh and a surpricing amount of blood. I’m not saying Herr Eugen was wrong in his assertion, just that his view isn’t shared with most shavers. He does then go on to describe other failed – in his opinion – ways to provide friction, before revealing his brilliant idea:

It is an object of the present invention to provide a safety razor in which the friction bar produces a considerably improved skin-tightening and hair-raising effect so that the hairs will be cut more closely to the skin. This is attained according to the invention by providing the bottom plate of the razor with a friction bar of a curved shape as seen in cross section, which is divided into a plurality of serrations or teeth of an angle, the bisector of which is inclined away from the razor edge and toward the base of the friction bar so that the serrations have a shape similar to the teeth of a file or saw. The serrations may form a plurality of straight rows of teeth or series of individual teeth, scales, or the like which may be offset relative to each other. The longitudinal rows of teeth always extend transverse to the axis of the razor handle and therefore also transverse to the shaving direction of the razor. Thus, if the head of the razor extends at right angles to the axis of the handle, the serrations extend parallel to the edge of the razor blade and if it extends obliquely to the axis of the handle the serrations extend obliquely to the razor edge. In the latter case, the friction bars may be provided with additional serrations or grooves which extend in the shaving direction and exert a guiding effect.

In other words he wanted to turn the safety bar into a rasp or a file, which would hold onto and tug on the skin and stubble, holding onto hair and raising them up; there is a quite wordy technical description of how the undercut teeth on the safety would not only force the hairs upright, but also allow for easy detection of missed hairs. 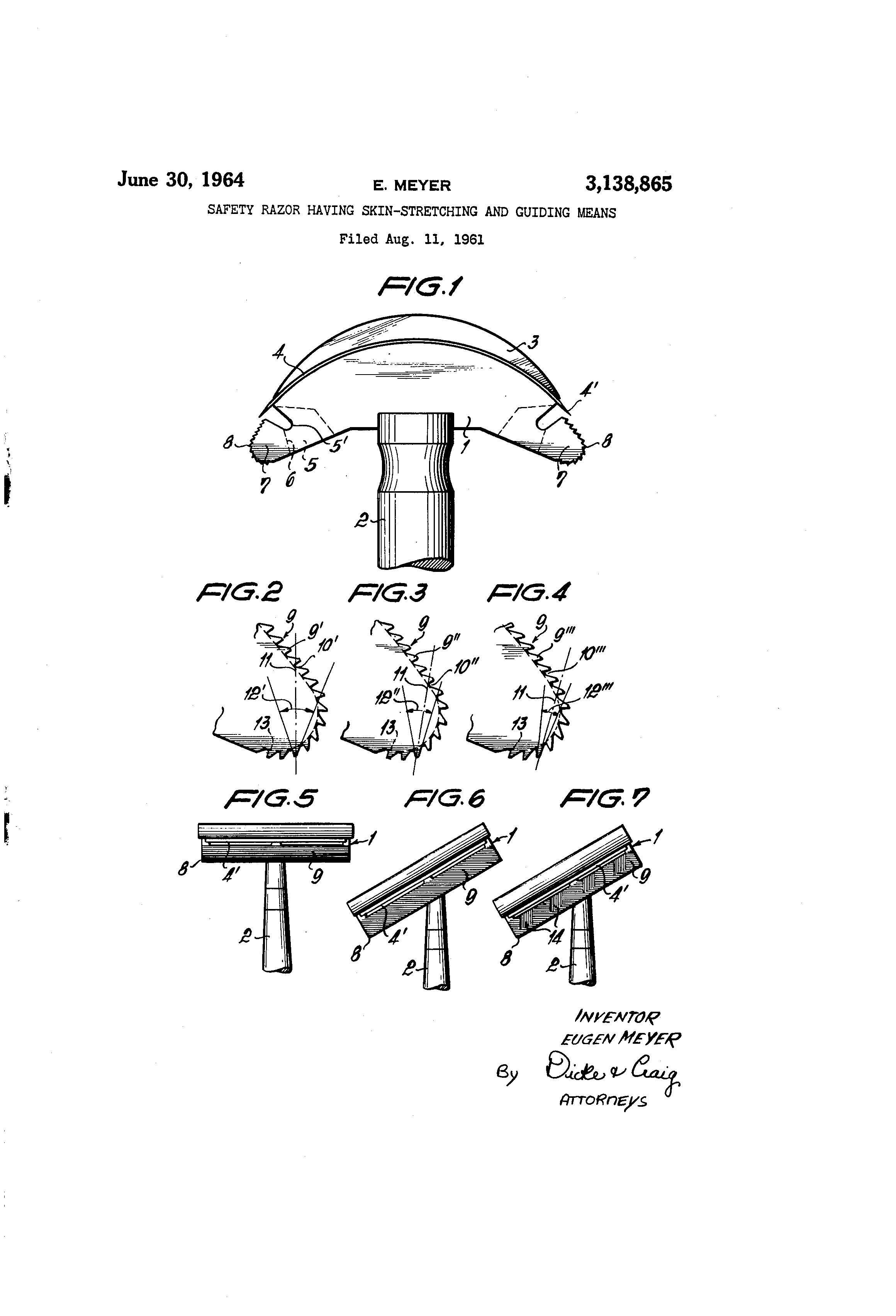 The rest of his razor seems to be a fairly standard three piece razor, although the drawings also show a variation where the head is mounted at a 45° to the handle.
Given that modern razors don’t seem to be manufactured with the idea that the safety bar or comb should provide as much friction as possible in order to pull the skin tight when we’re shaving, I’ll leave it up the reader to assess how successful Herr Eugen’s patent were in the grand scheme of things.