Be it known that I, Thomas E McDermott, a citizen of the United States, residing at Somerville, in the county of Middleand State of Massachusetts, have invented certain new and useful Improvements in Safety-Razors…

I’ll grant that Mr McDermott’s invention – which he filed a patent for in 1908 – was certainly new and novel enough for the patent office to grant a patent for… but I’m not entirely convinced that it was a particularly useful improvement. Or an improvement, period. The patents describes a couple of interesting ideas though, and his razor is one the first one to include a twist to open mechanism even if Mr McDermott describes it as an mechanism to primarily adjust the blade gap. 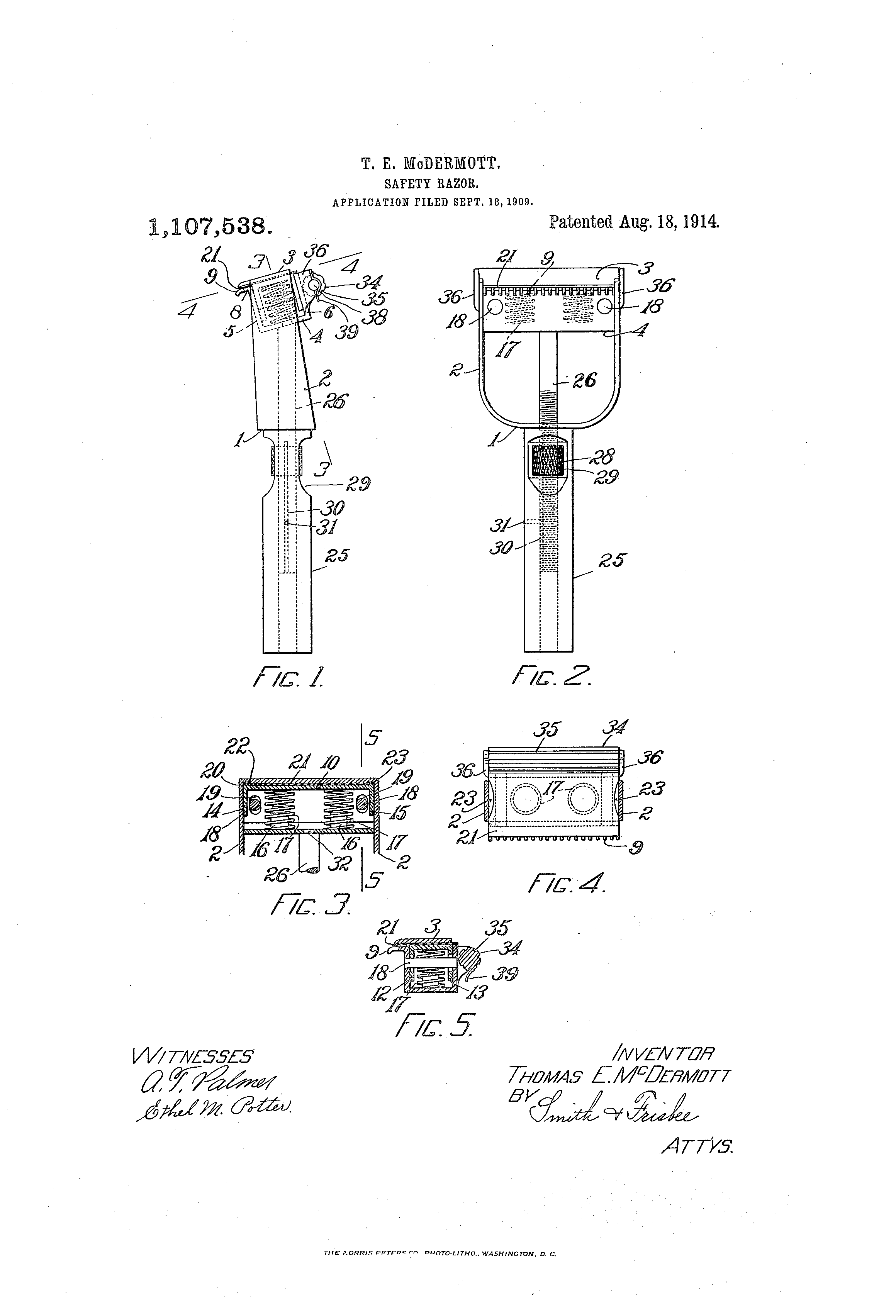 Mr McDermott’s main idea seems to be that what he terms the “blade-bed” – the base plate in double edge terminology – should be resilient and exert a “constant yielding pressure” on the blade, thereby permitting the blade to be adjusted for a close or medium shave and preventing the cutting edge from vibrating.
He solved this by making the base plate spring loaded and movable, so the springs would press the base plate against the equivalent of the top cap. The blade-bed assembly consisted of a bottom piece that included the safety bar, two springs with spring guides, an upper piece that presses against the blades, and some “attaching and connecting parts” – ie.: fasteners and the like. The whole blade-bed assembly is mounted on a threaded rod that can be adjusted up and down via a nut in the handle to adjust the blade gap… and to allow replacement of the blade. It’s the last detail which in my opinion makes this a very, very early example of a twist to open razor.
Mr McDermott also added a second so called improvement to his patent; a roller for rubbing lather on the face. Curiously enough he barely explains it in the text of the patent, just a short paragraph:

A lather roller 34 provided with longitudinal corrugations 35 on its surface is attached to the wall 6 by ears 36 or the roller may be attached to the side arms 2 of the frame l. The ears 36 are provided with openings into which the ends of the spindle 38 pass. A spring catch 39 may be placed, if desired, over the ends of the spindle 38, to permit the lather roller to be readily attached and detached.

And that is all he had to say about that improvement… to me it seems like his main idea was the resilient blade-bed, and the roller just got tacked onto the design later. Such a roller could be added to almost any single edged razor though, if someone was so inclined.
To me the outstanding idea in Mr McDermott’s patent was something he barely touched upon; twisting a knurled nut located in the handle to open the razor for replacing the blade. His resilient blade bed was an evolutionary dead end when it comes to adjustability, and the less we say about his roller, the better.*
This seems to be the only razor or shaving related patent Mr McDermott filed, his other patents are for an animal trap, a folding boat and an improved oar lock.

*) We don’t want to give the multinationals ideas of what more to tack onto their flexible, vibrating, multi-bladed cartridge razors, do we?