…and again, and again.

Heated razors is an age old quest. Gillette just dropped one, which seems to have impressed Mark over on the Sharpologist, and in their typical over the top marketing Gillette seems to be pushing this since the best shave ever… A hint for P&G: if you need to advertise the fact that your razor is waterproof, you’ve likely made an overly complicated razor.

Electrically heated razors isn’t a new idea by far, even if the latest itteration seems both more complicated* and far safer to use than some of the older ideas**.

While I can’t be completly sure, I’m reasonable satisfied that the current offering is based on a patent I found that was filed in in 2008 and assigned to the Gillette company – the patents describe a great many of the same features as the ads do. 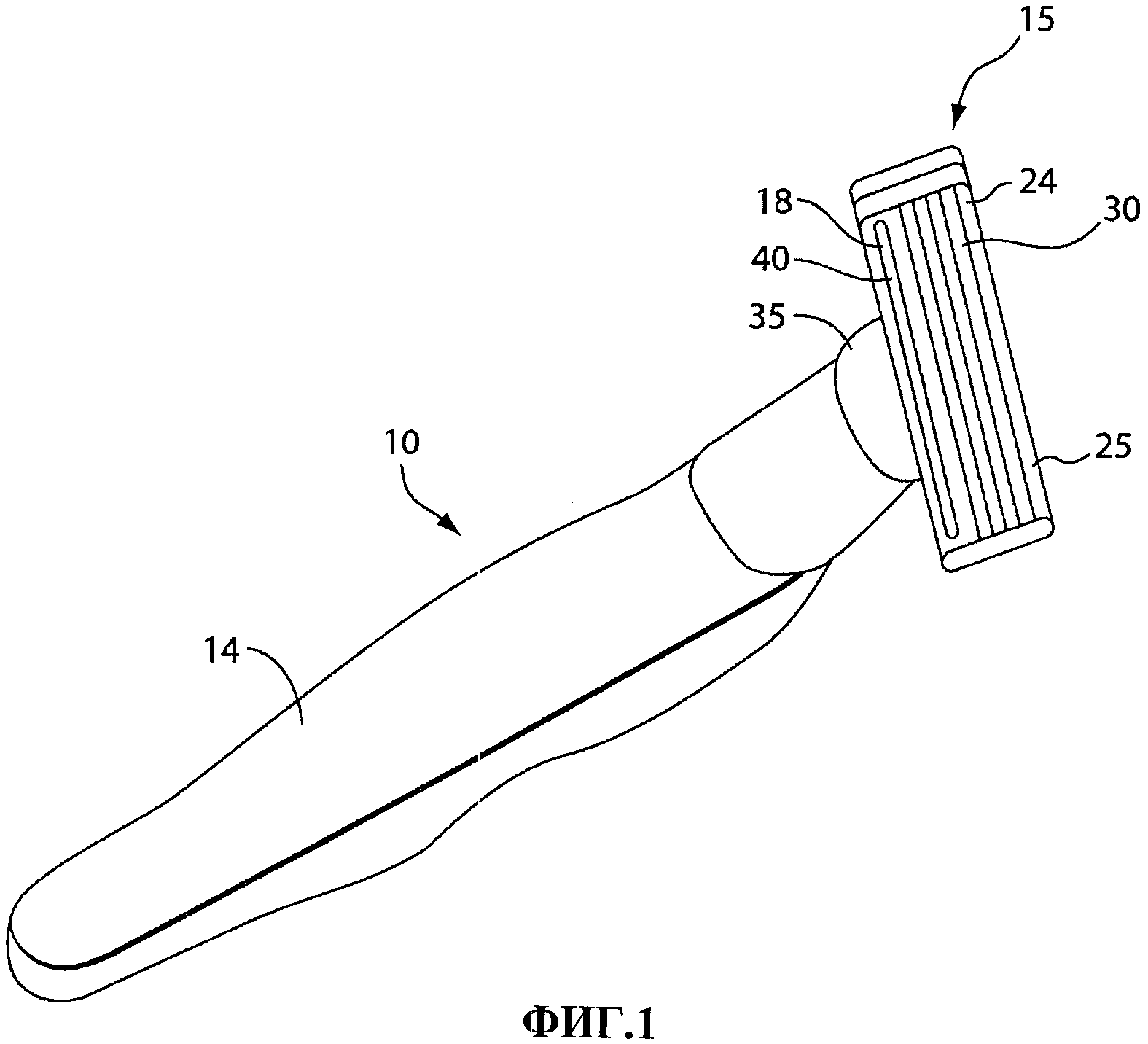 …safety razor comprises a handle 14, a cartridge 15 with a safety device 18, a plate 24 and blades 30 between them. Inside the cartridge there is a heat-dispersive strip 40 and a heating element 45 with a resistive element 46 and an insulating element 50. The safety device comprises an electrical circuit providing power supply to the resistive element that provides heat to the heat-dispersive strip so that it imposes warmth to skin of the user during shaving.

The patent also lists twenty seven (27!) citations that predates it… and I found quite a few patents for heated razors that isn’t listed in the application.

Barra Charles  filed a version all the way back in 1923. If you think the plug looks kind of odd it’s because you’re meant to screw it into a light bulb socket… so no chance of grounding it.

…electrically heat safety razors in such a manner that they may be conveniently used while being heated and that the heat may be maintained during the shaving operation at any desired temperature, whereby I am enabled to obtain the advantageous results of smoothness and comfort during shaving and to avoid infections of the skin which frequently occur from the use of unsterilised razors.

Charles Barra also filed a heated straight razor in 1923, or rather an attachment that turned your straight into a heated razor: 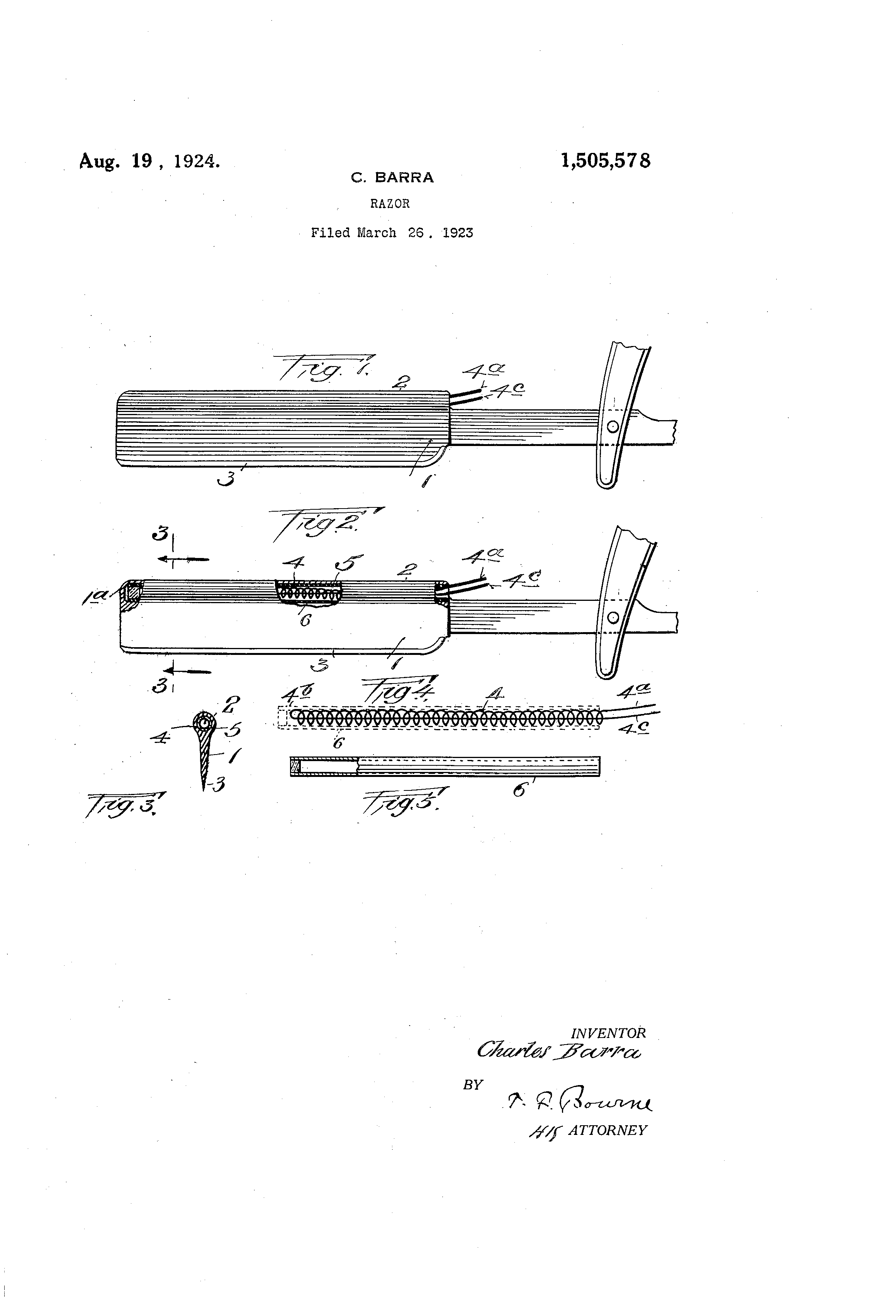 A razor blade heated to such a temperature will make shaving of a persons face more comfortable and the resulting shave will be more satisfactory than where the face is shaved with a cold razor.

…using an electric heater disposed at a suitable distance from the cutting edge of the blade, and in thermal relation thereto, which heater may be supplied with current from an ordinary electric service outlet, whereby the blade may be heated to and maintained at a sterilisation temperature both while not in use and while in the act of shaving.

(As a side note, sterilisation temperature is about 80°C (175°F) for almost all bacteria, yeast, and fungi… 80°C is enough to cause second and third degree burns in less than one second.)

In 1933 Pirwitz Emil filed for a safer variation, which required plugging and unplugging the razor: 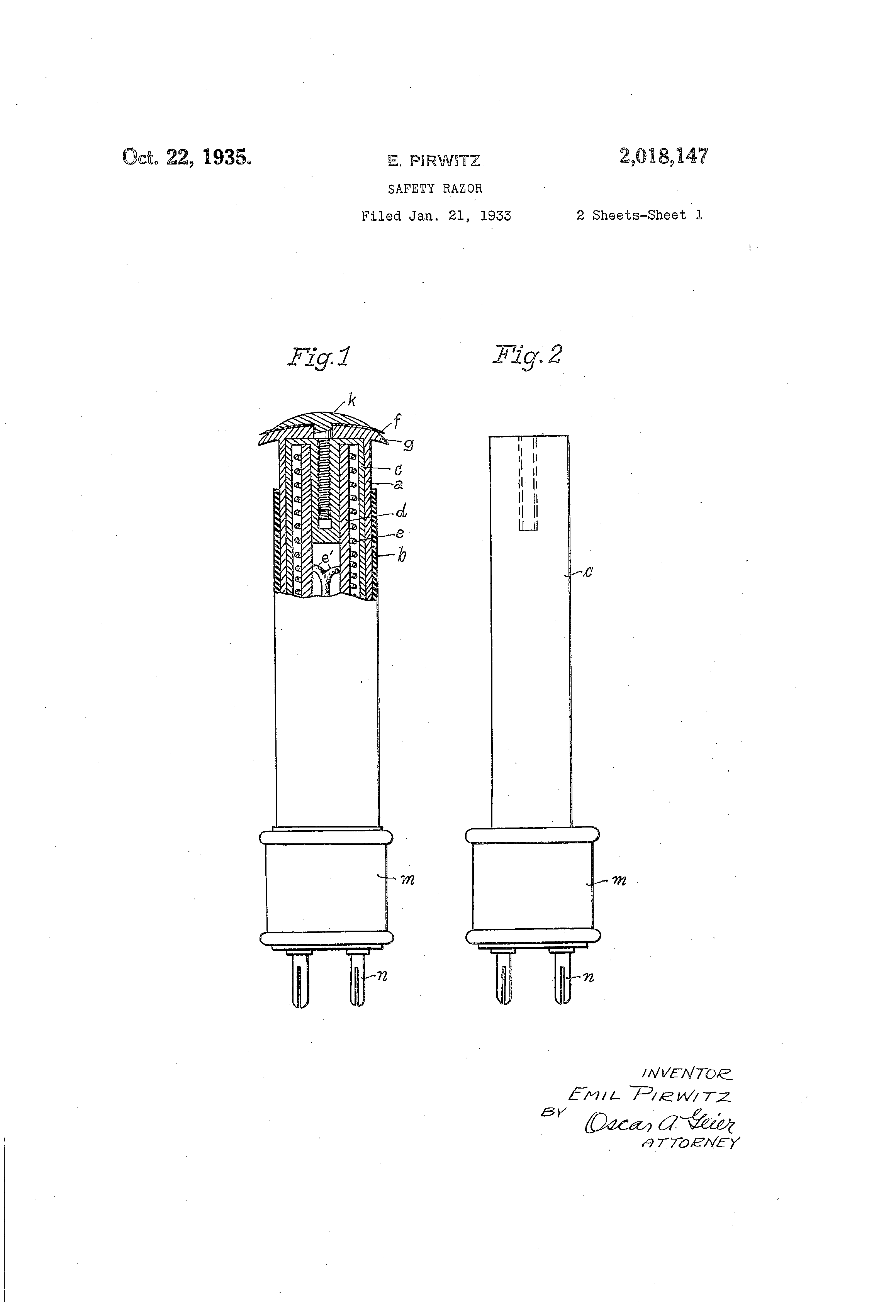 …the invention employs a heating bolt disposed in the handle of the razor and made of material that is a good heat conductor, such as metal, the bolt iilling the entire handle from one end to the other and being adapted after one heating to keep the razor heated during an entire shaving operation without a new supply of heat.

…a bolt of this type permits the use of the razor without the dangers resulting from keeping the razor under current during the shaving operation. 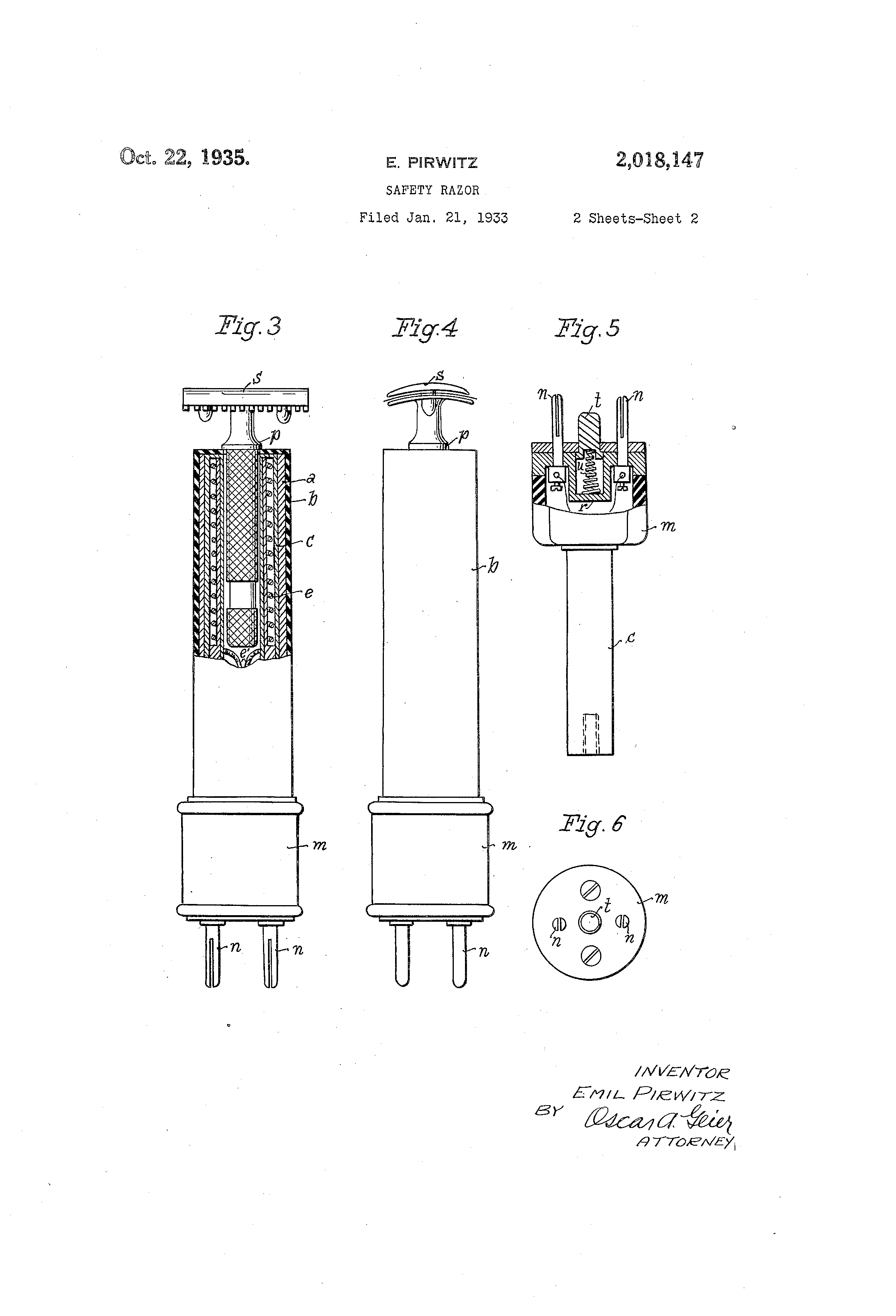 Look at figures 3 and 4; it’s a regular safety razor inserted into the heating device… which I presume you could either use while inserted in the bulky heater or take out and burn your fingers badly while shaving.

Thomas J Henderson and Leon Henderson aimed for cool hands in their 1935 patent: 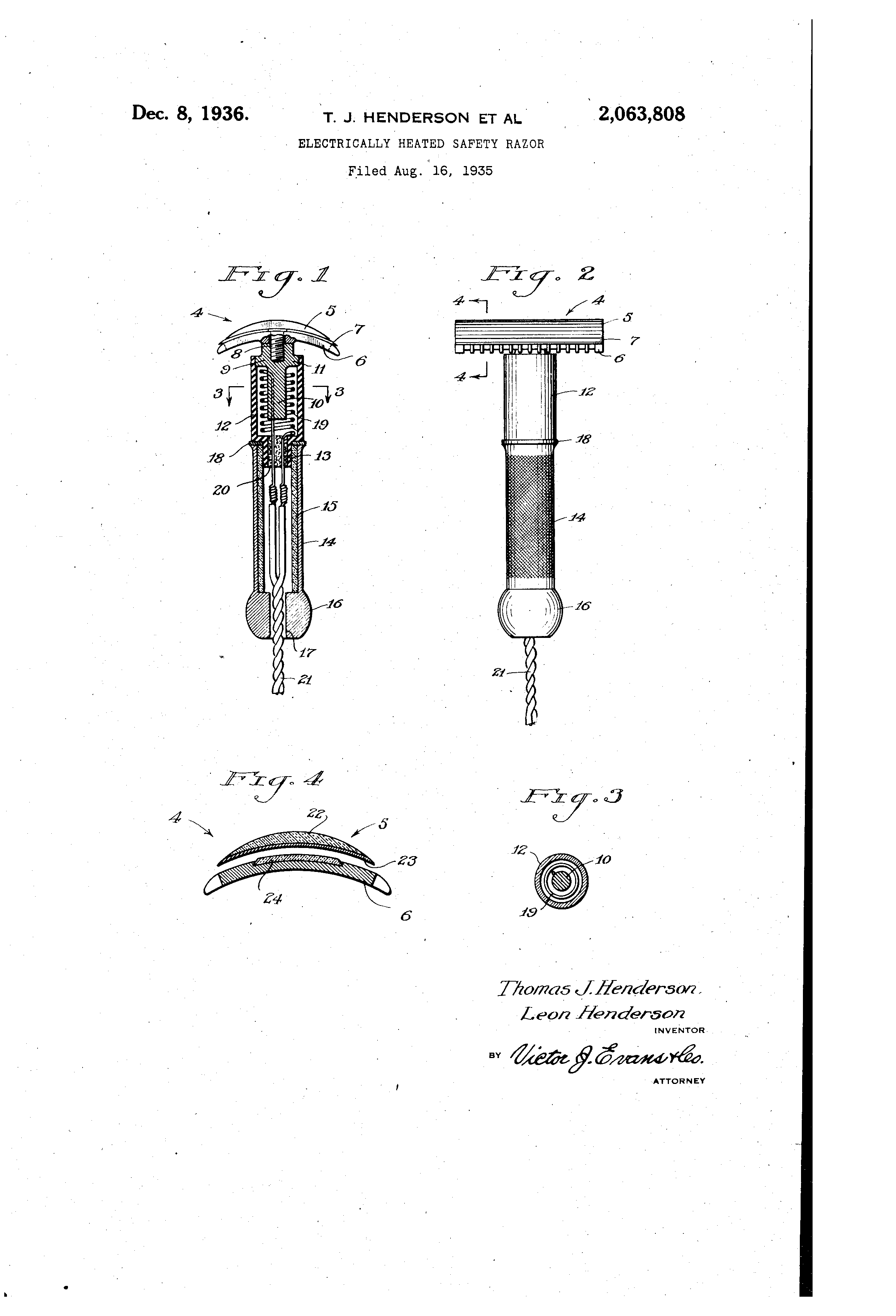 The primary object of our invention is to provide in a safety razor a handle thereof which in use will apply heat only to the desired portion of the razor, that is, the head and blade, but will maintain a cool handle or grip.
A further object of our invention is to provide an electrically heated safety razor handle which is readily adapted for use on any suitable razor head.

Or how about this one from 1942, patented by Moses M Gravin?

…a safety razor with an electrically heated heating element therein which transmits an even heat to the razor blade and keeps it warm or hot during the shaving operation.
One of the objects of my invention is to heat the razor blade by conduction through a metallic element. I Another object of my invention is to provide ventilation between the heating element and the handle so that the handle will be cooled by the circulation of air.

In 1948 James Russel Hunt filed for a heated razor that allowed the shaver to adjust the current going into the razor by means of a rheostat: 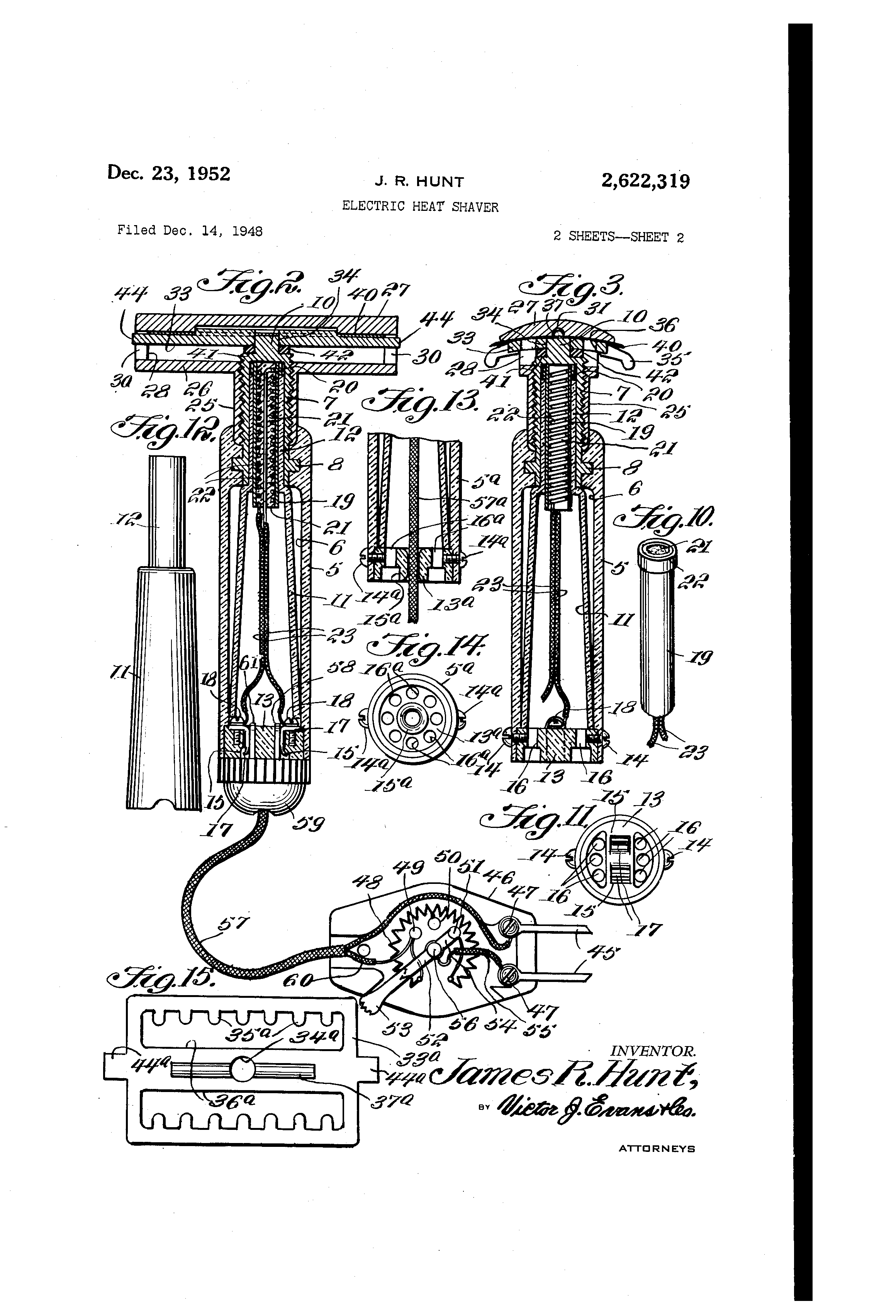 ..an electro-thermic shaver of the safety razor type which is adapted to directly heat the razor blade by heat conduction through a metallic element having a high coefficient of thermal conductivity such as copper.
…a heat control unit to permit the heat to be regulated by the user to produce various heat temperatures.

So as can be seen, the desire to make a heated razor is almost as old as Gillettes original safety razor… there is nothing new under the sun, nor in the shave den – except this time the offering isn’t that much bulkier than a regular razor, nor does it offer the exciting chance of electrocuting yourself while shaving.

*) It has overheat protection, two levels of heating, onboard battery with wireless charging, microcontroller, wobbly blades… I suspect the lats bit is unintentional
**) Hook your ungrounded razor up to the light fixture in your bathroom.. what can go wrong?