If you’re using a cartridge razor today, you know that the real cost is not in the razor, but in buying the replacements cartridges. In the same way, and for the same reasons, the real cost of using a DE back in the day was the replacement blades. This created the market for razor blade sharpeners as well as self sharpening razors (the Shake Sharp razors springs to mind). The cost also inspired Bertil Åström of Sweden to invent a simple and non-expensive safety razor;

In other words, combining the advantage of the straight’s everlasting blade with the shaving simplicity of a hoe type safety razor… while at the same time making the razor simple to manufacture, use, and maintain – without a top cap.

So that is four things to achieve all at once, and the way Mr Åström went about achieving them is both simple and easy to manufacture. The patent drawing does a pretty good way of explaining it. 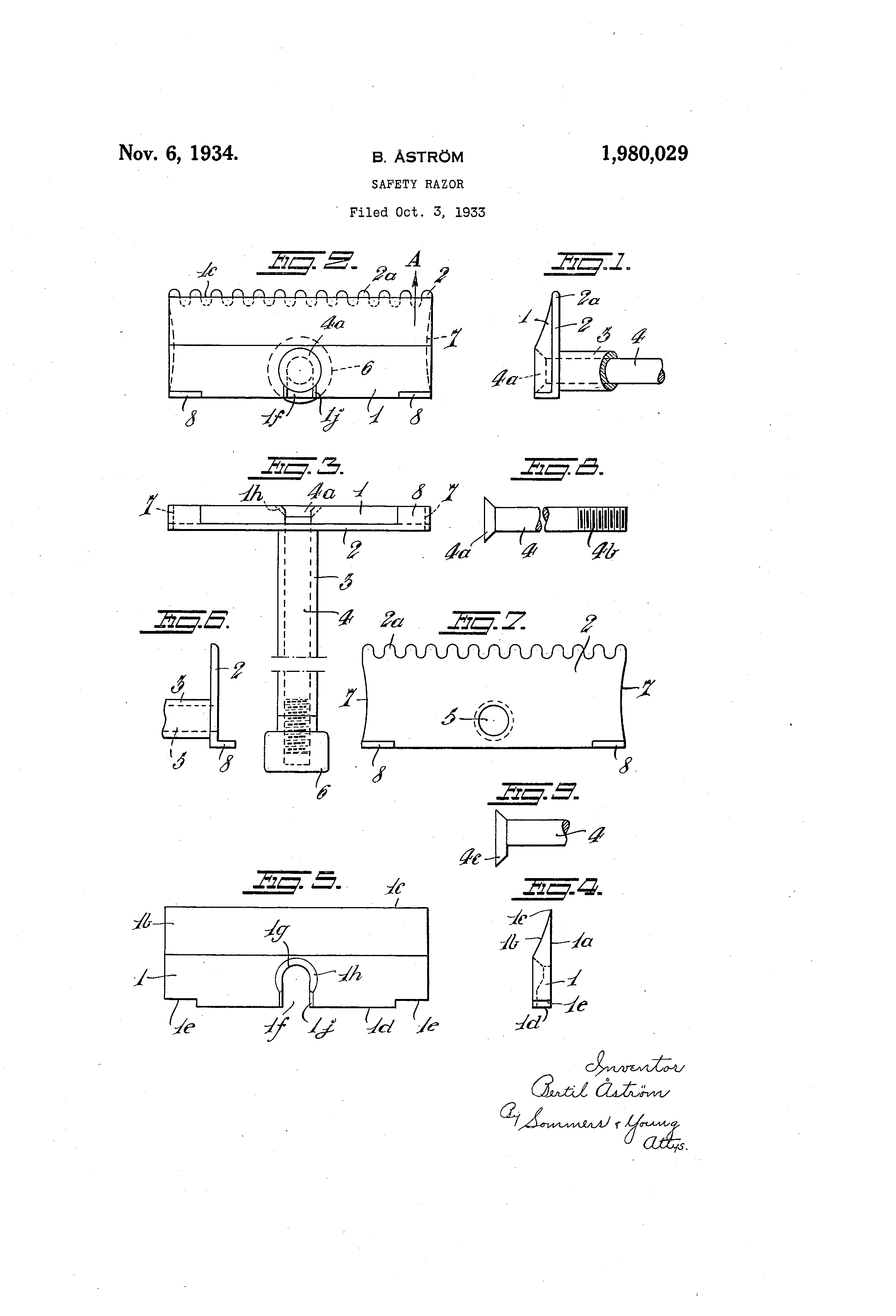 The whole razor consists of three major parts: A blade of a unique shape with a cut out in the back, a bolt and the handle with attached base plate…. and that’s it
The countersunk keyhole in the back of the blade makes for easy assembly and disassembly – the cone shaped head of the bolt easily and repeatedly locates and lock the blade in the correct spot – while the shape of the blade itself do away with the need for a top cap. That is two of the for items taken care of.
According to the patent the thickness of the blade increases the rigidity and reduces blade vibration, which should lead to the edge lasting much longer than the ordinary thin safety razor blades. Mr Åström also claimed that the angle of the edge would result in a  very efficient and painless shave.
The keyhole slot also means that one don’t have to to unscrew the bolt more than a few threads, leaning it secured to the rest of the razor, while the base plate (referred to as a carrier plate) is permanently fastened to the handle proper. That takes care of the two last items on the list.
To disassemble the razor, all the user have to do is to loosen the nut on the end of the handle and the blade will be free to slide off the carrier plate. To assemble it again after cleaning and/or honing the blade, all the user have to do is to slip the blade in place under the bolt head and tighten the nut. All told as easy as a twist to open DE, and with less parts to keep track of than a three piece safety razor.
The shape of the blade itself is another stroke of genius, and one that isn’t explicitly mentioned in the patent text; unlike a straight razor – or the blades used in most wedge-razors – it only needs to be honed on one side. Setting up the edge of a razor blade (or a knife, for that matter) takes a fair bit of skill, but Mr Åström made it a lot simpler with the shape of this blade.
Overall I’m quite impressed with the well though out simplicity of the design. As far as I can see it achieves it’s four stated goals, while additionally providing a blade design that would be far easier to maintain than the two sided hollow ground of most straight razors and wedge razors. It is a shame that the design don’t seem to have gone beyond the patent (which have expired by now, in case someone has a machine shop…).