Skip to primary content
A delightful little pamphlet published by C H Lonergan in 1884, with a mere four pages of text… well worth the couple of minutes it takes to read through. Most assuredly in the public domain by now.

The Art of Honing a Razor
The first essential to painless and easy shaving is by use of a keen cutting razor, any of celebrated makes will do, but for ” self-shaving” none answers the purpose so well as the wedge-shaped blade, always avoiding the ” hollow-ground” or so-called ” rattlers” generally used by barbers, for the reason they arc so thin the edge will spring on a coarse beard, and will not cut so well as the thicker blades, which also hold a keen edge longer, and in all respects do better for private use. Next, after procuring a good water hone, with ” rubber,” a small slate stone always sold with the hone, and used to lubricate the hone with the aid of a sufficient amount of water, and rubbing this on the hone until a fine grit is evenly distributed over the surface. This done, and your hone placed in a firm position, you then proceed by stroking gently, the razor being placed on the side, bearing on it only sufficient to keep it firmly on the stone, drawing it from “heel to point” (the heel is the point nearest the handle, and the opposite the point), with the edge forward, and alternating the side after each stroke, and thus successively until a fine edge is obtained. If, during this process, the razor should click, jump, or give other evidence of some foreign substance between the razor and hone, it should be immediately removed by washing both hone and razor, rather than trouble looking for the mite or particle which caused it, as it will cause small “nicks” or breaks in the edge “of your razor, which you can determine by the use of a magnifying glass. Fig. I is the glass preferred by the writer for the purpose in question, and it would be always better before proceeding to use the hone, to examine the edge of the razor, as shown in Fig. V, in order to determine the amount of irregularities in the edge, then you know where to look for them, and when present, they will appear under the field of the glass as in Fig. 3.
Again, during the process of honing, from time to time pass the edge of your razor across your wet thumb or finger nail to clean it of what is called the ‘wire edge,’ after which again use the hone until you have a perfect, smooth edge, which, when obtained, will appear as shown in Fig. 2. Always make your examination in a good light, holding the glass, by means of the fenestration on the side, close to the eye and the razor close to the glass, and then focusing to your sight. After doing this a few times, you will soon become an adept in the use of it. When the edge is perfect, it will look uniformly smooth under the field of the glass, Fig. 2.
By closely studying the foregoing instructions, any person may in a short time become an adept at putting a razor in perfect order. 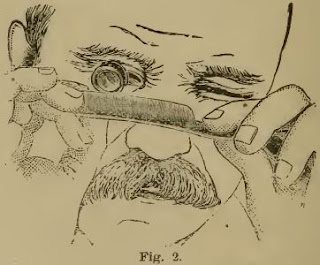 The Art of Shaving.
Many persons declare they cannot shave themselves, but after learning the first principles they find it “easy shaving” — the primary being a good sharp razor, and secondly how to use it.
After the face is well lathered and commencing to shave where the beard begins to grow at a point in front of the ear. with the razor in either hand holding the edge against the beard, and keeping the back of the razor close enough to the skin and without touching it, at the same time drawing the muscles’ of the opposite side of the face in order to tighten the skin of die part you are about to shave (as, by so doing, you will find it impossible to cut your face while shaving, as cutting is always by lack of observance of this rule), and at the same time giving a scythe-like or cutting motion, carefully avoiding the scraping or pulling down motion, and shaving with the growth of the beard, not against the “grain,” keeping in mind one grand principle in shaving, never turn the edge of the razor against the skin.
With the foregoing rules well in mind, you will have no trouble in -having, and overcome the dread of cutting yourself, and above all, the diseases likely to be contracted in barber shops from the use of unclean cups and razors, or shaving after some one with a loathsome skin disease.
After using a razor, always wipe it dry and clean, for by so doing moisture will not rust the fine edge; and to better insure against rust, carefully strap on a good leather strap kept especially for that purpose.
The following hints may prove valuable in determining the qualities of a razor: If after shaving carefully, you again examine the edge by the aid of the glass as in Fig. 2, and you find the edge turned, or in any way imperfect, it is safe to conclude that the razor is too soft or too hard. If the former, the edge will be turned or worn off; if the latter, it will be serrated and appear “broken out 1 ‘ along the edge, and therefore in purchasing a razor it is always better to adopt the plan generally adopted by barbers, i. e., to obtain the cutler’s sanction to allow you, by paying a trifle more, a reasonable length of time to try one after another until you get one to suit you. By this means you obtain all you wish in a razor.