Don’t you hate it when you’re emptying your shaving mug of water and your soap falls out? Well, me neither, but just in case you do Philip Schauble and Louis Dohm, of Elizabeth, Union county, New Jersey have you covered. Or had you covered, back in 1875 when they patented an improvement in shaving mugs.
To understand why an improvement was needed, one have to recall that while a lot of us today will soak the brush, load the soap of the puck, then use a separate bowl or mug to make lather they did it differently back on the day. The soap puck was kept in the shaving mug, water was added on top, lather made on top of the puck and water then poured out… sometimes along with the soap.
Our bold inventors came up with a solution to this problem, as they stated in the very beginning of the patent letter;

Our invention consists of a shaving-cup having means for securing the soap, so that the cup may be turned upside down, for pouring out the water for cleaning it, without the loss of the soap, and without the necessity of holding it by the brush or by the hand, as is now necessary when cleaning the cup, thus saving considerable trouble and greatly facilitating the work.

In hindsight the solution Philip and Louis came up with is obvious when you read about it, but it does actually require a bit of lateral thinking. In short… who says a mug have to be smooth on the inside? What if the bottom of the mug had a screw thread mounded to the inside, like a nut that goes on the end of a bolt? And if the soap also had screw threads, like the aforementioned bolt, and could be screwed down into the mug?
As explained in the patent:

The plan which we have adopted in this case consists of screw-threads in the bottom or lower part of the cup, with corresponding threads molded in the soap, to screw it into the cup by a little forked’key or other suitable instrument…

They also outline an alternate, by having a screw that comes up through the bottom of the mug, but point out this is a much less ideal solution. 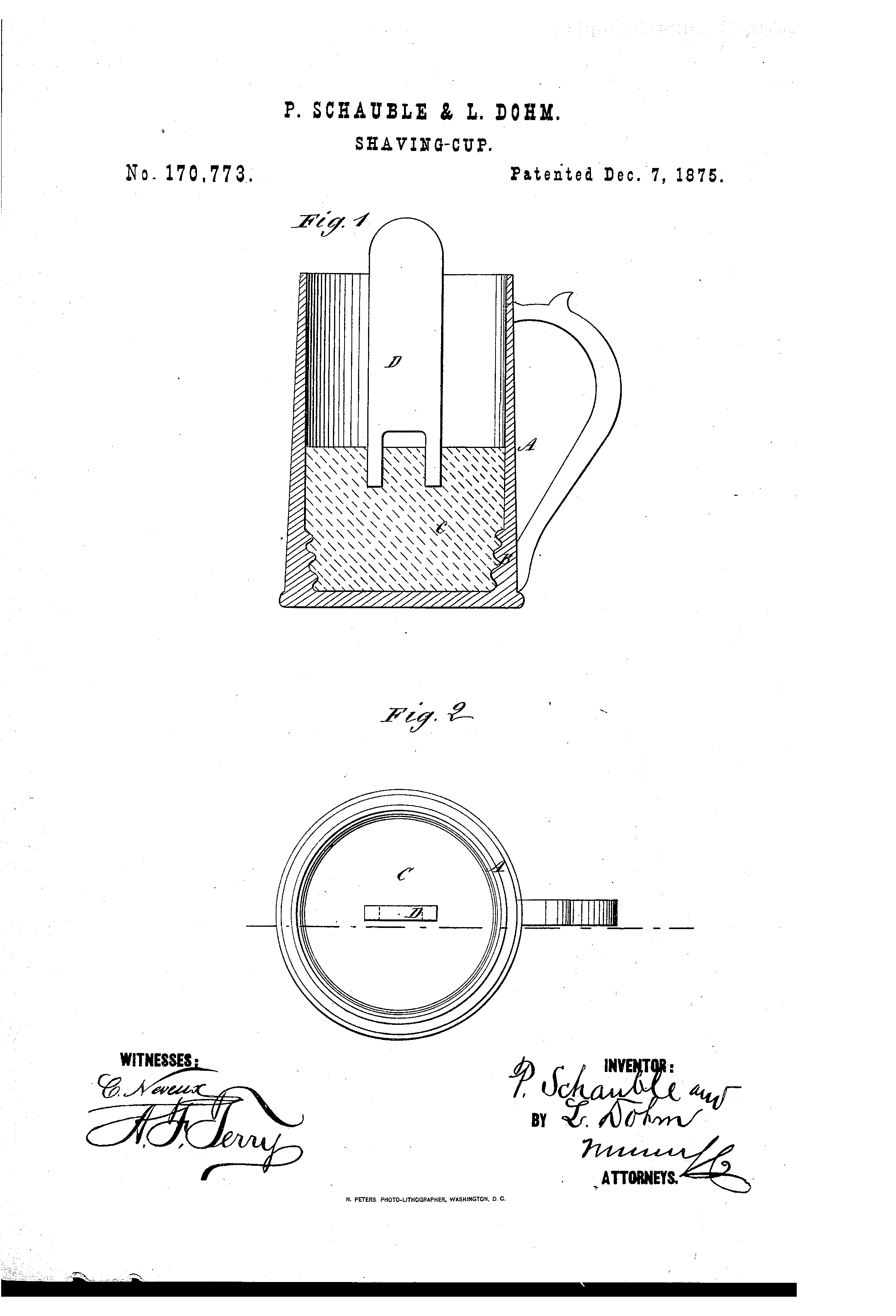 A solution they don’t touch upon in their patent might be more obvious to us today; simply have circular ridges along the inside of the mug and cast the soap in situ (i.e.:directly into the shaving mug). The downside of that solution is, off course, that soaps cannot easily be replaced.
I have no idea if this invention was ever put into production, and the patent have long since lapsed… but if any artisan or small scale manufacturer of soaps and shaving accoutrements put something like this on the market today, I would be sorely tempted. Perhaps a standard diameter and screw pitch could be agreed upon by a group of loosely organised artisans so we could choose between several of our favourite soaps… but I’m daydreaming. I guess I’ll continue to soak my brush, load from the puck and lather in a separate mug of scuttle.

3 thoughts on “Another improvement in shaving mugs”