For those who grew up with early eight bit micro computers* – such as myself – the Thing on a Spring was most assuredly a thing… but what has that Thing to do with razors?

Well… it was what I was reminded of when I stumbled upon Herr Felix Meyer’s patent for an “improved” safety razor. I imagine Herr Meyer was standing in his bathroom one morning in Germany and said to himself something along the lines of “Would this razor shave better is ze handle was not so stiff?”
And so he applied for, and got patented, an improvement that – in the words of his patents – was something like this:

In the preferred form of carrying out the invention the handle of the shaving device is made resilient, for instance, by being made or the like spring. Blade, guard and cap are either rigidly mounted together upon the resilient handle and have a common spring action, or the blade is stationary and-only guard and cap are resiliently mounted on the handle, or the cap and guard are stationary, whereas the blade is resilient.

The mechanics of having a moving blade – or moving base plate and top cap – while the rest of the razor is rigid is daunting… which may explain why the preferred form of the invention was a normal enough head mounted on a springy spring.
It is fairly clear from the description that the idea was for the razor to adjust to uneven pressure and sharpness by introducing an amount of ‘give’ to the razor, thus preventing cuts and nicks. Herr Meyer even came up with a way to adjust the stiffness of the handle:

Preferably the handle is so constructed that it does not consist of a single spring but of two coiled or other steel springs, which are inserted the one into the other, in such a manner that the handle can be made more or less rigid by adjusting the said coils, the one in the other. If instead of a coiled spring, a spiral (watch spring) is used for the handle, it is also preferable to make the handle in two parts, which can be taken apart and inserted into each other, so as to be able to again adjust the strength of the spring action at will. The object of the adjustability of the strength of the spring action is to be able to regulate the said spring action according to the growth of the beard or to the sharpness of the blade. 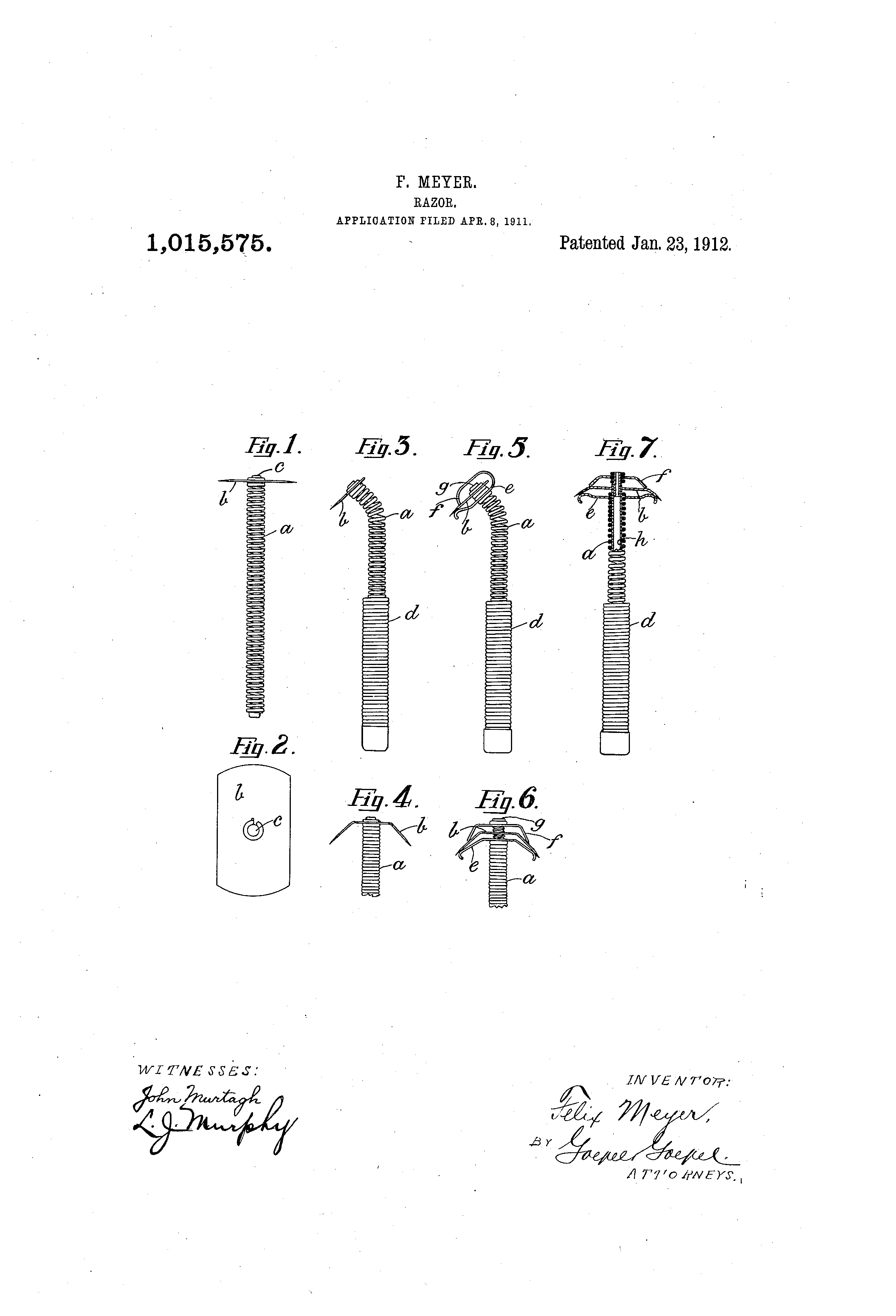 Reading the rather verbose text, it seem that Herr Meyer believed the flexible handle would give a shave closer to that of an experienced barber with a straight – or at least make it less likely for a new shaver to cut himself. Since we still uses razors with stiff, non-resilient handles, I’ll let you all work out how well Herr Meyer’s invention did in the marketplace…
… unlike the Thing on a Spring. That game have stuck with me and a generation of 8-bit gamers.

*) At least those who had a C64 or C128, and I guess those with the Amstrad CPC as well. Not those sad people with a ZX81 or a Spectrum though.