I’m currently travelling for work, and Phil of BullGoose sent me a care package that’ll make my travels a lot more comfortable and enjoyable.

I knew that Phil is an all round Good Guy™ in addition to being a purveyor in bespoke shave gear, on top of being the man behind of my favourite shave forum. Based on the box I received, I have now reached the conclusion that Phil is in fact downright an Awesome Guy™.

I knew Phil wanted to send me a brush, from an artisan he considered taking into his store but for various reasons it didn’t pan out despite the brushes being highly regarded. I knew Phil said he would include some Asylum brand shaving soap, some aftershave and “a few other things to fill the package”. Phil’s idea of package filler simply blew me away… in a good way.

So what did I get in the box from Phil? 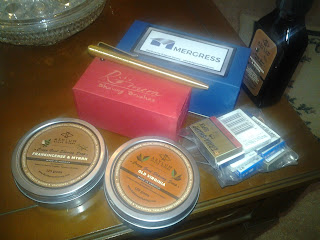 So a big Thank You to Phil, for his amazing generosity and for making my travels so much better.