Skip to primary content
Remember compact cassettes? Those little plastic rectangles that ended up as spaghetti in your car stereo? To me at least they are sooo 80’s… as are the little fold up boxes they came in (and which for the most part promptly got lost and were never seen again).

Very much a part of the 80’s were also the idea to pack other stuff in cassette tape boxes – personally I recall having a stationary set in one of those.

Someone came up with the idea of packing a whole toiletry bag into one, to quote the patent abstract:

The gear look rather flimsy in the patent drawings – in particularity the razor which is made up of four separate parts. Still, for a back up piece of kit to keep in the car or for handing out as swag it would probably been good enough. 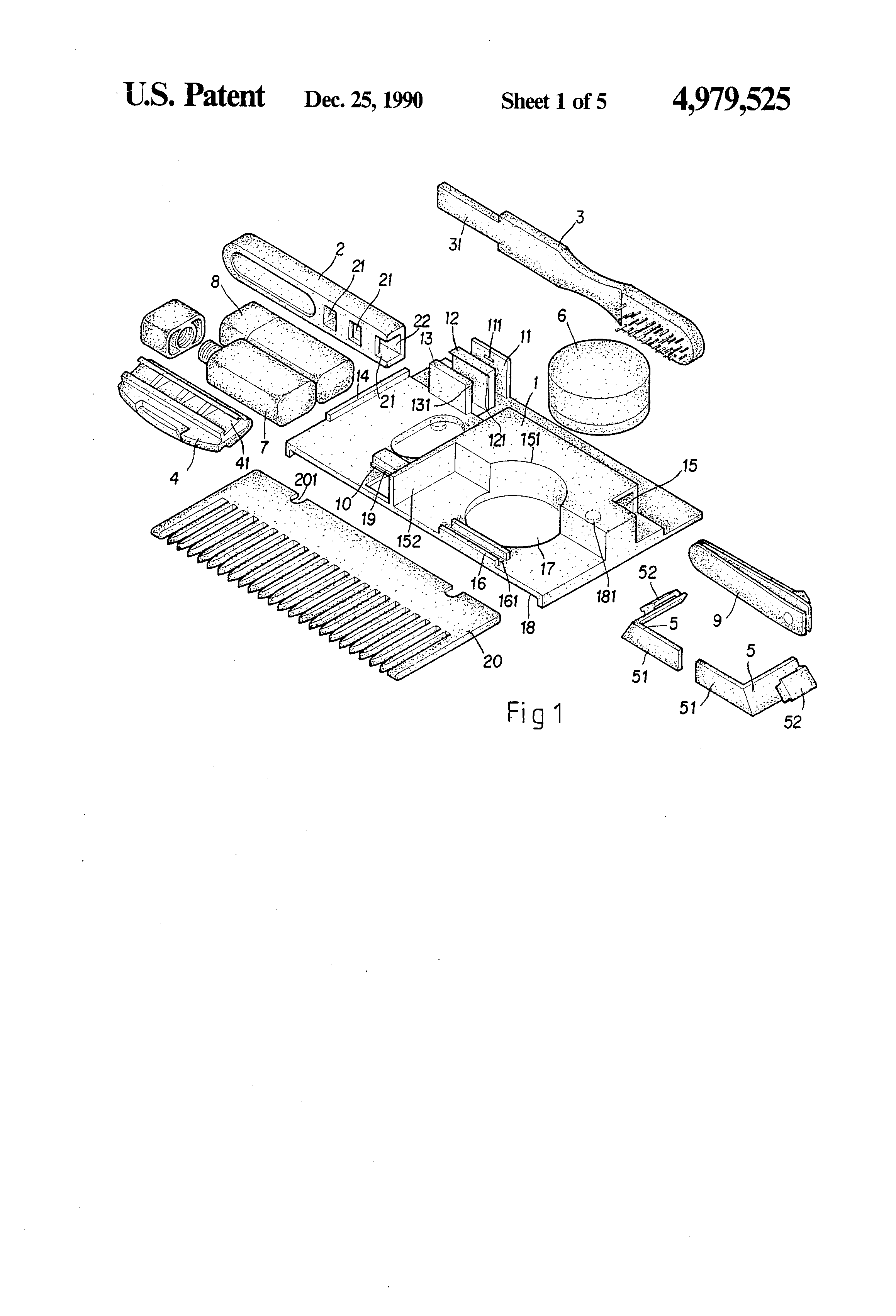 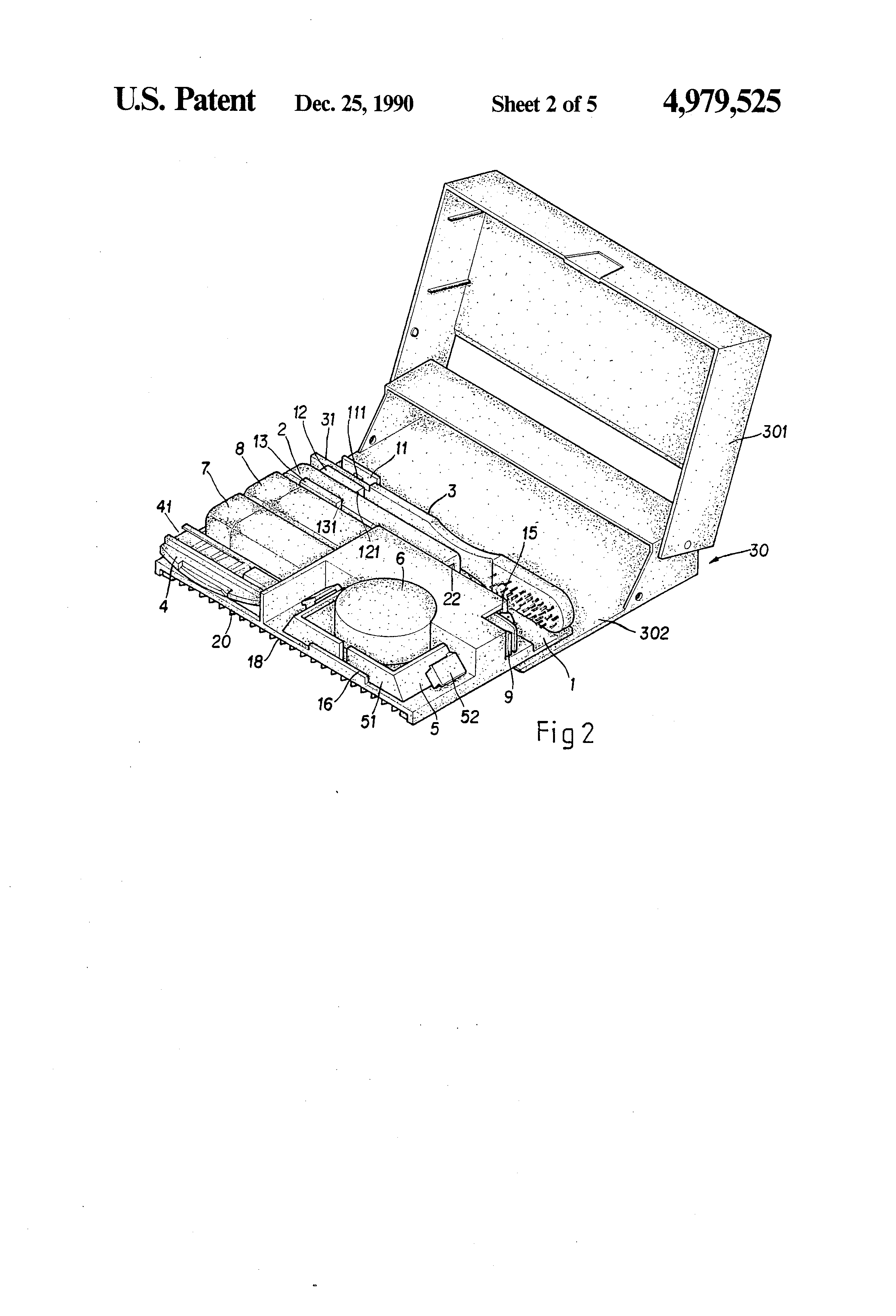 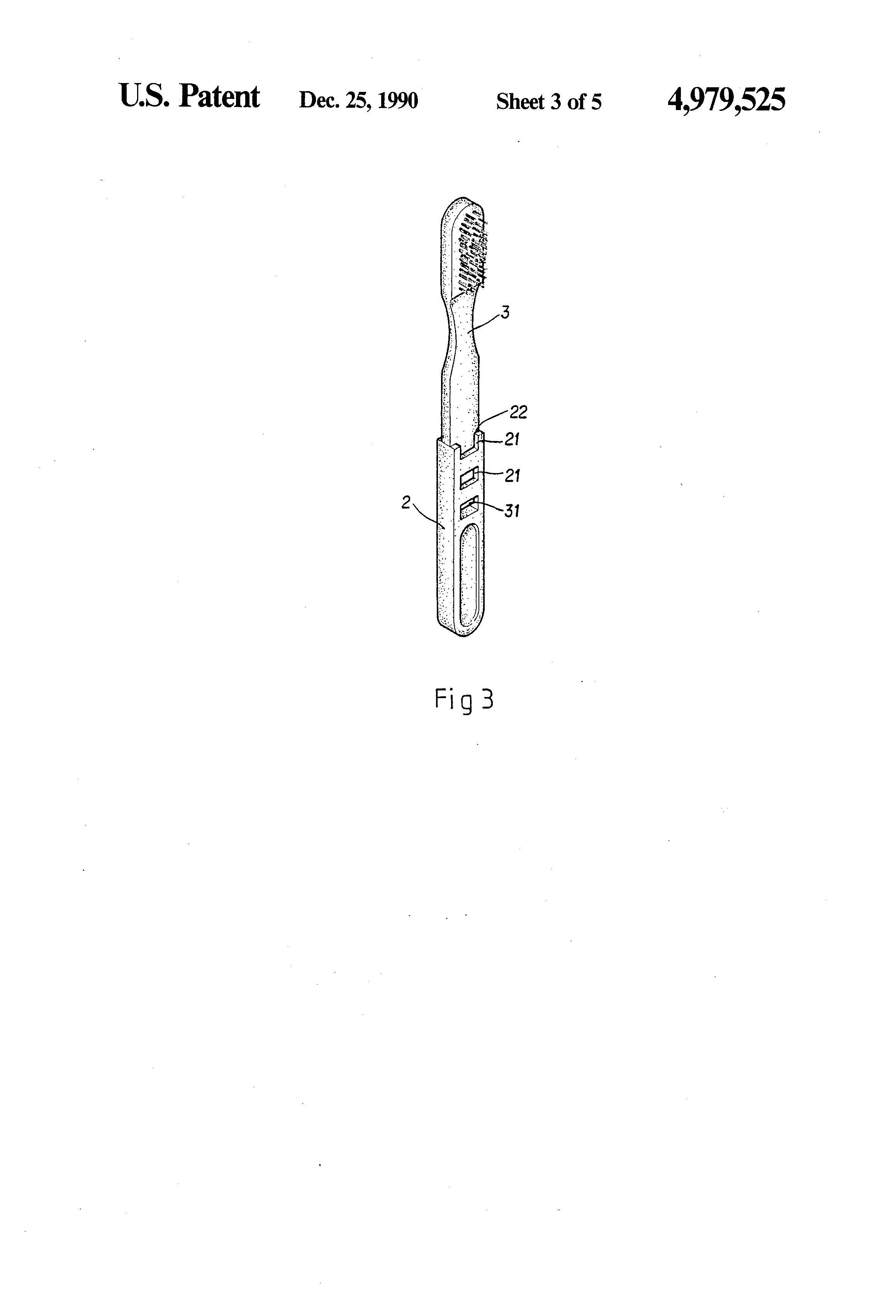 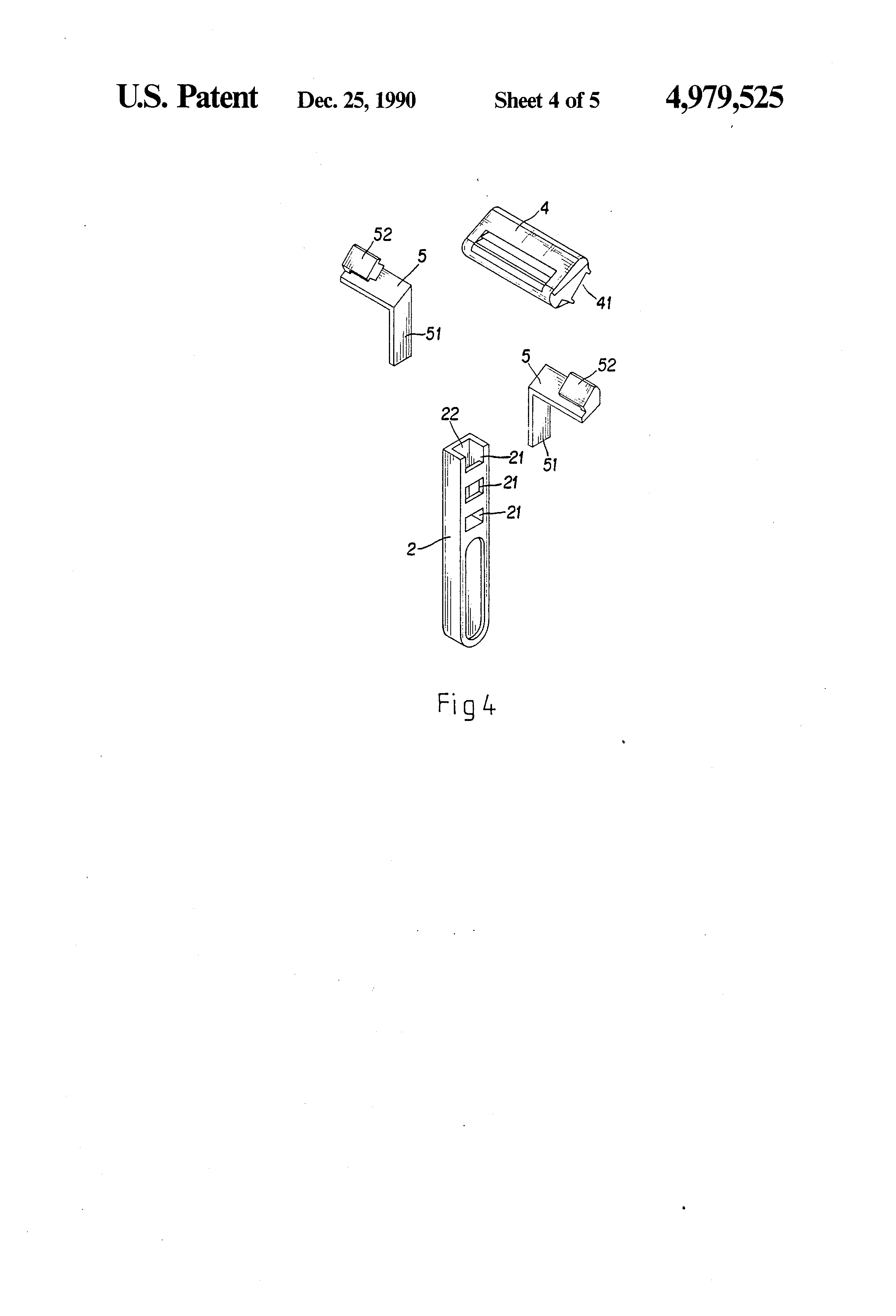 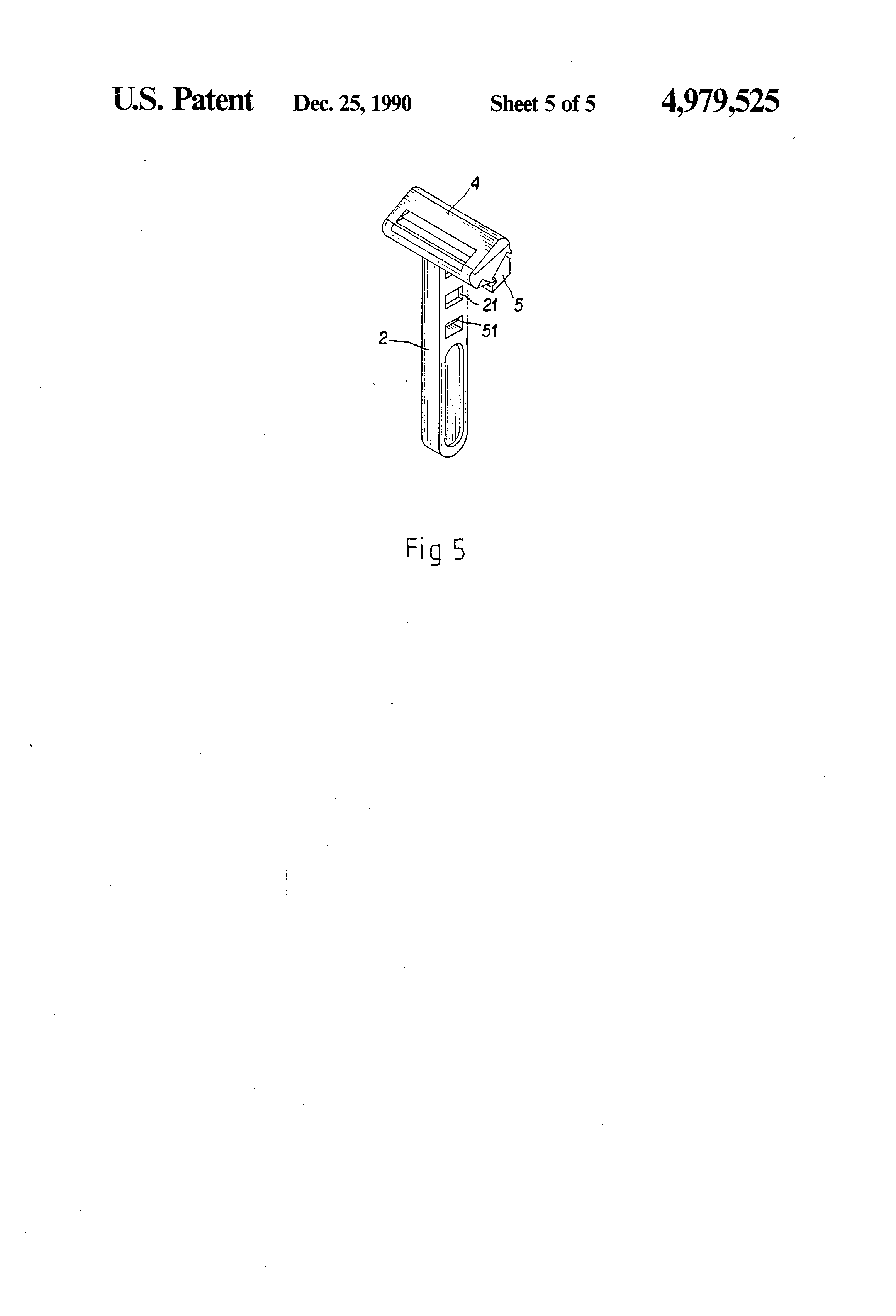 The patent goes into a lot of details, and it’s amazing how much the inventor managed to pack into a tiny package.

As shown in FIG. 1 and FIG. 2, the present invention is composed of a base 1 mounting a handle bar 2, a tooth brush 3, a razor holder 4, two razor connecting elements 5, a cologne water container 6, soap-suds container 7, a shaving cream container 8, nail clippers 9, a comb 20 in a cassette 30. Said base 1 comprises a plurality of stop plates 11, 12, 13. Said stop plate 11 has a nose 111 and stop plates 12 and 13 each have a curved face 121 and 131, respectively, on the inner side thereof. Stop plates 11 and 12 receive tooth brush 3, and stop plates 12 and 13 receive handle bar 2. Said base 1 further comprises a receiving trough 15 for receiving nail clippers 9. Said receiving trough 15 has a curved face 151 at one side from which a round hole 17 extends and receives said cologne water container 6. Division plate 152 also extends from said receiving trough 15. Said base 1 has a stop 14 for soap-suds container 7 and shaving cream container 8 which are placed between the stop 14 and plate 152 and between stop block 13 and the razor 4. Said base 1 has two protruding plates 16 to form a locating track 161 for the razor connection elements 5 by means of the vertical ends 51 fit in locating track 161. Said base 1 has a cavity 18 at the bottom for mounting comb 18 by means of depending axles 181 matching with the notches 201 of the comb 20.
Said handle bar 2 has a plurality of notches 21 at one side to reduce the contact face and an indentation 22 to receive the tooth brush 3 or razor connecting elements 5. Indentation 22 in the handle bar 2 is for connection with the connecting plate 31 of the tooth brush 3 or the vertical ends 51 of the two razor connecting elements 5. The mounting of tooth brush 3 by plate 31 in indentation 22 of the handle bar 2, is shown in FIG. 3. The razor holder 4 has tracks 41 for receiving tabs 52 of the connecting elements 5. Said two razor connecting elements 5 are symmetrically identical and can be respectively connected with razor holder 4 and handle bar 2, tabs 52 mounting the razor holder 4 and the vertical ends 51 of each connecting elements 5 received in indentation 22 of the handle bar 2 as shown in FIG. 4.
The cologne water container 6, soap-suds container 7 and shaving cream container 8 can be refilled whenever required, and can be interchangeable. Said nail clippers 9 are directly placed in the receiving trough 15 and can be picked up for ready use when required. Said comb 20 is placed at the bottom of the base 1, and can be easily picked up by simply pulling the notches 201 away from the protruding axles 181. Said cassette case 30 is composed of an upper cover 301 and a lower cover 302 connected by a hinge and receives said base 1 and all the accessories contained in the base 1 to complete an assembly of the present cassette sanitary kit.
The tooth brush 3 when located between stop plates 11, 12 is firmly retained therebetween by means of a nose 111 to keep it from breaking away. The handle bar 2 when placed between the stop plates 12, 13 is firmly retained by means of the respective curved face 121, 131 therebetween. Division plate 152 has a protruding block 10 with a trough 19 for the attachment of the razor holder 4 by means of its track 41 as shown in FIG. 2.
As the assembly is completed and all the accessories are well allocated, they are orderly arranged and firmly secured to provide a compact and complete cassette sanitary kit.