It is quite possible to shave with a flint blade, and some predynastic flints were undeniably utilised in this way. The early Egyptian metal razors exactly copy these flint forms. One type, confined to the Early Dynastic period, was rectangular with four bevelled edges. Another form, going back to Late Predynastic times, looks like a broad double-edged knife with a short tang. Probably most were sharpened along one edge only, as is certainly the case with the specimens from Queen Hetep-heres’ tomb. A very similar little implement has recently been found in early Sumerian tombs. The Mesopotamian razors, always unfortunately in bad preservation, are regularly found in pairs; it is uncertain whether both edges were sharp. In the Aegean area the earliest certain razors date from the LM III period. The majority are one-edged (Fig. 81) but there are double-edged specimens in which the handle was riveted directly on to the blade without a tang.
The majority of European razors belong to the same family. In the earlier graves of the so-called Siculan II period, containing Mycenaean vases imported from Greece, we find a long blade with slightly concave sides and an indentation at the lower end (Fig. 83). The purpose of the indent was perhaps to allow the forefinger to feel the skin while shaving. In any case it is a prominent feature in nearly all European double-edged razors. In contemporary North Italian implements the indent is much more pronounced, and, above, a wide slit separates the two blades. An openwork handle, generally terminating in a loop and cast in one piece with the blade, was attached to these Italian razors (Fig. 85). They belong to the Middle Bronze Age. Rather later a small group of razors appears in Franconia and Western Bohemia with a very broad double-edged blade, sometimes at least divided by a slit near the end, and an openwork handle cast in one piece with it (Fig. 86). Crude razors of this pattern are found at a relatively later date in Holland and Eastern France (Nievre and Rhone). But the contemporary Central European razors of phase E have already grown into developed horseshoe-shaped blades (Fig. 87).
In Upper Italy, on the other hand, during the Late Bronze Age and first phase of the Early Iron Age (Villanova culture), the razor assumes a rectangular outline, preserving the indent in the lower end as an almost circular aperture and provided with a loop of twisted wire riveted on to the blade as handle (Fig. 88). The same type is found in South Italy and Sicily, but in that island a type, derived from the earlier native form, but with wider blade, more pronounced slit between he edges and a flat tang for handle, is also encountered in the later tombs of the Siculan II period. Similar forms occur in Southern France (Arige and Charente) and probably give a clue to the ancestry of our British razors.
The latter resemble a maple leaf in form. A tang to take the handle projects from the base of the blade and is often continued downwards by a wide midrib along its face. In the opposite end is a deep V-shaped indent and just behind it a circular eyelet. Though generally Late Bronze Age in date, one such blade, though without the round eyelet, was found with rapiers and palstaves in Scotland.[38] It is generally believed that these razors belong to the group of foreign forms introduced into Britain by invaders arriving at the beginning of the Late Bronze Age. The affinities of our razors in any case seem to lie rather with Sicily and the Western Mediterranean than with the countries east of the Rhine.
While the standard European razors of the Bronze Age were double-edged, there is a series in Scandinavia with only one blade. Such are doubtless in the last resort derived from the normal Mycenaean implement (Fig. 91). 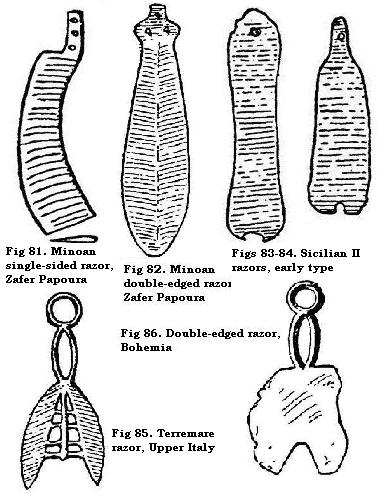 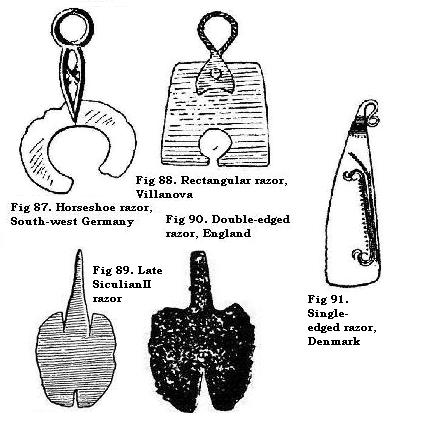