A recent result of my RAD, the Wilkinson Sword Classic (WSC) is in one regard in a class of it’s own; It’s the only DE razor I’ve tried so far that feels very much like a cartridge razor in use – apart from giving me a superior shave, that is. 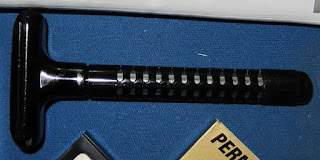 I suspect it’s due to the materials and design of the razor; moulded thermoplastic with a metal rod inserted in the handle gives a very tail-heavy balance – unlike pretty much every other razor I’ve own. The difference in balance means I have had to adjust my grip slightly to get a good shave out of the WSC; however it should also mean that someone coming straight from using a cart should more easily adapt to using the WSC and get to enjoy the pleasures of DE shaving with little or no fuss.

The WSC is a decent razor – not the mildest, nor the most aggressive in my rotation. The construction is sturdy, and the fact that the cap covers the ends of the blade is a nice touch. The head is a little on the big side though; if you shave under your nose it might give a little bit of trouble – the obvious solution is off course to grow a manly moustache. One downside I’ve noticed – apart from the big head – is that the head quickly clogs up with lather, much quicker than other DE-razors. It don’t mean all that much, but it is somewhat distracting to rinse the razor twice as often as I’m accustomed to.

Overall I can recommend the WSC as a good first razor for those interested in trying out a DE, or as a decent razor for travelling. For those of us with incurable RAD, it is a cheap addition to our collection.