My latest acquisition on the razor front is my second oldest… a 1958 Gillette TTO known as the “TV Special”. A fellow shaver over at The Shave Nook decided it was better to sell it than having it sit unused in his rack, so I got the opportunity to snap it up for a little less than twenty dollars – which was a steal, really. Apparently the razor was advertised during the 1958 broadcasts of “Gillette Cavalcade of Sports” and it’s notorious online for being a great shaver. 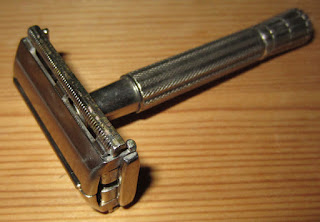 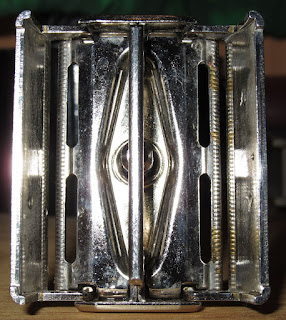 Head on with the head open – note slight loss of plating on three spots along the right bar
As for the shave, I can best describe it as mild and effective. This isn’t a harsh razor by a long stretch – in fact, some might find it to be too mild. So far I’ve only taken it for a spin with an Astra Superior Platinum blade, but I can’t imagine it’ll behave significantly worse with another blade… unless it’s a bad blade off course.

Despite being a short handled razor, it’s remarkable comfortable to hold. The slight flare near the base helps, as do the knurling. The balance is pretty good too, even if I find it slightly top heavy – either the head could have been slightly lighter, or the handle slightly heavier. It’s no worse than most of my other razors – I’ve yet to find a razor with absolutely perfect balance.

I’ve only had it for about a week so far, and used it a couple of times, but the 1958 Gillette TV Special has gained a slot in my rotation. If you’re in the marked for a vintage Twist To Open razor, and like ’em mild… well, you could do a lot worse than picking up one of these babies – even if they can be hard to find at a reasonable price.