The sharp eyed reader no doubt spotted my alternative choice of lather yesterday… and for those who didn’t, here is a reminder: 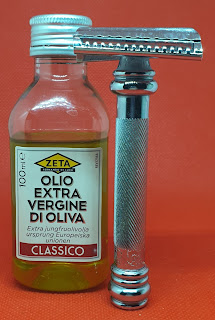 While it was a spur of the moment thing to do it yesterday – not enough coffee and all that – shaving with oil in general and olive oil in particular is something I’ve been pondering for quite a long time. The logic is reasonable simple:

So having tried it, what do I think about using olive oil for shaving? Well, here is my micro-revies of olive oil as a shave oil.
After applying it, and washing my hands so I could safely grip my razor, the shave itself wasn’t bad at all despite the complete lack of cushion. I got no cuts, nicks or razor burns. Uins olive oil certainly gave a much better result than shaving using just water, and better than I recall using regular bath soap too. And unlike the canned goo and gel I ditched years ago, my skin wasn’t dry or itchy afterwards.
One might think that smearing oil over the skin would result in clogged pores, zits and all sort of problems, I must report aht at least my ugly mug don’t have any of those right now.
Downsides were the somewhat messy sink and razorhead, but nothing that hot water and a soft wash cloth didn’t fix. My goatee was also pretty greasy from the oil running along my skin, but since I shave before my morning shower that was pretty much a non-issue – I have to wash lather out of my beard after shaving regardless.
Was the experiment a success, in that I proved to my own satisfaction that olive oil is a viable alternative if there is no proper lather around? Oh yes, and a better alternative in my opinion than plain water or bath soap.
Will I repeat the olive oil shave? Probably not unless I had to; the lack of cushion and having to wash my hands before reaching for the razor makes it way less than ideal in my eyes.
Olive oil. It works, so don’t knock it unless you’ve tried it. Probably works better for legs and armpits than a well chiseled face though 😛