Consider a spherical cow in vacuum… actually, no.

Consider a hypothetical scenario where the software – that is the pre-shave, the lather, and the post-shave – is identical, but we’ll consider different hardware – razor and blade / cartridge. In other words; I’ll only look at the cost of razor + cutting edge.

The Gillette Sensor I got as a promotion in boot camp lasted about 25 years of somewhat infrequent use before breaking. That should make a good baseline as a lifespan of a razor (even if at least one of my razors is a century old and still shaves great).

For the “cheap and nasty route”, Amazon charges roughly 13USD for a Gillette Fusion5 ProGlide Power Men’s Razor Handle (quite the mouthful to say) and 34USD for a pack of 12 refills. Gillette suggests that a cartridge lasts “up to” a month of shaving, so a 12 pack should last a year. The total cost of the handle and 25×12 cartridges at Amazon (which is cheap compared to buying in brick and mortar stores) is 863USD.

Looking over at BullGoose Shaving, a mid-range razor like the Muhle R41 Twist Safety Razor will set you back 75USD. He sells one of my favourite blades – the Green Astra – in packs of one hundred for a reasonable 15USD. In my experience, blades lasts for about a week, so a pack will lasts a little under two years – or 13 packs for the projected 25 years. Doing the math, we’ll find that going this route will costs a total of 270USD.

Or in a more visual format: 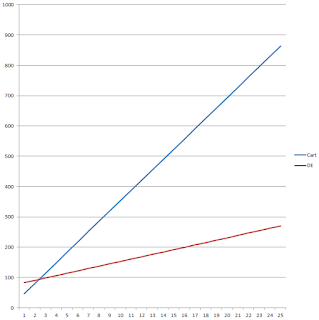 The break even point seems to be around two years and five months – 2,3665 years, which works out to roughly two years, four months, and twelve days – so if you plan to shave for more than two and a half year into the future, it pays to switch to DE once you used up any carts you already have bought.

Caveats: Amazon is as mentioned usually cheaper than buying from a physical store. You can get less expensive traditional safety razors, as well as significantly more expensive ones. I picked the R41 as an example of a mid-range model.

Again; this ONLY looks at the cost of shaving with a single razor and using the same blade, and assumes that you’ll use the same software regardless.

1 thought on “The cost of shaving over a quarter century”