It’s been a while since I deep dived into the weird world of magnetic razor patents.. so here goes:

Butler Ames patented a razor in 1917 that he claimed was a “new and useful improvements in magnetic razors”. 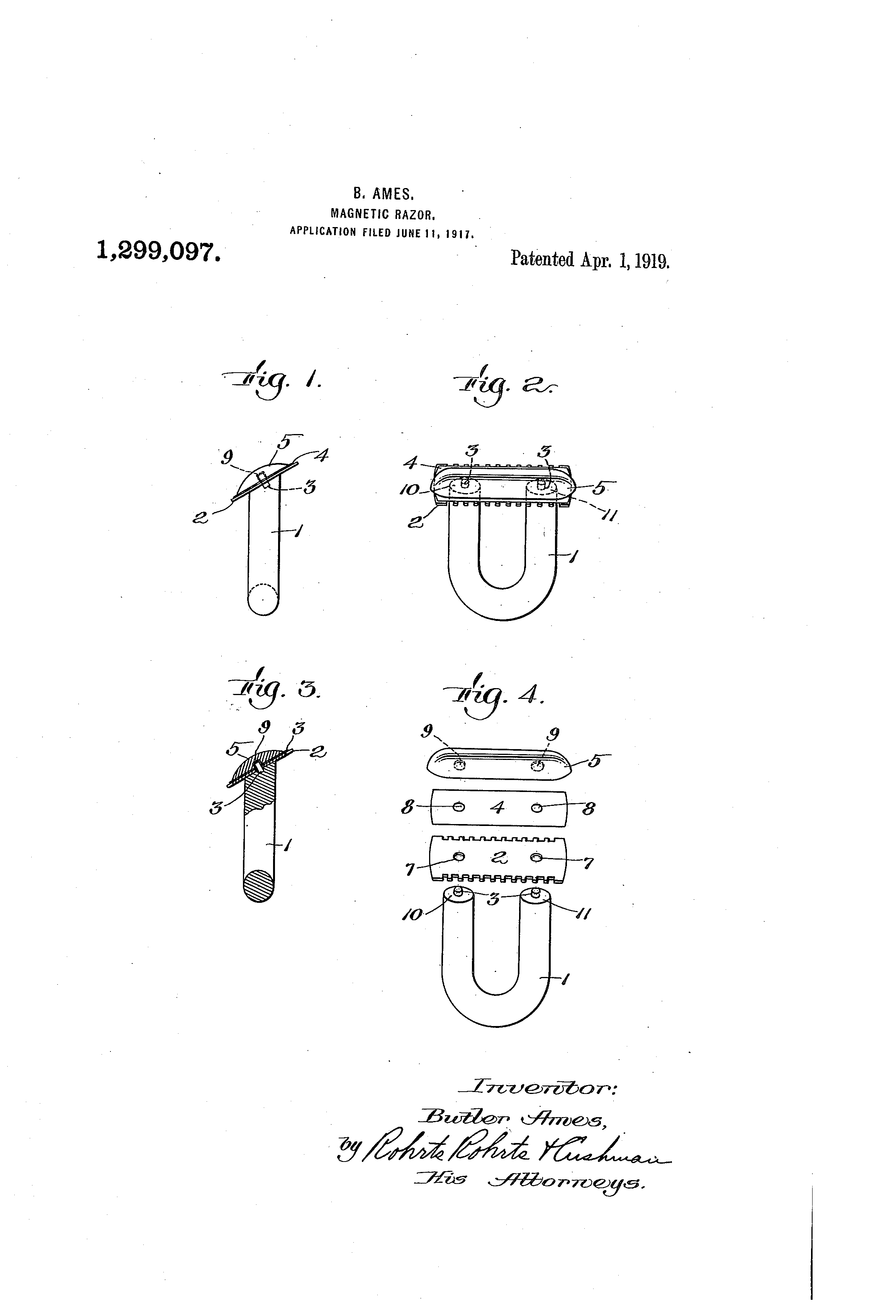 His razor was – as far as the drawing goes – simply a razor head attached to a horse shoe magnet. Attached BY magnet, in as far as the description describes it:

While the shape of the magnet may be varied within the scope of the present invention, it only being essential that one or more poles be dispose in such manner as to attract the parts and hold them together, I prefer to employ a U-magnet inasmuch as it affords two spaced pole pieces and also affords a handle which is very convenient in shaving.

At the same time Mr Ames also applied for and got a patent for another method of attaching the magnet to the razor head. 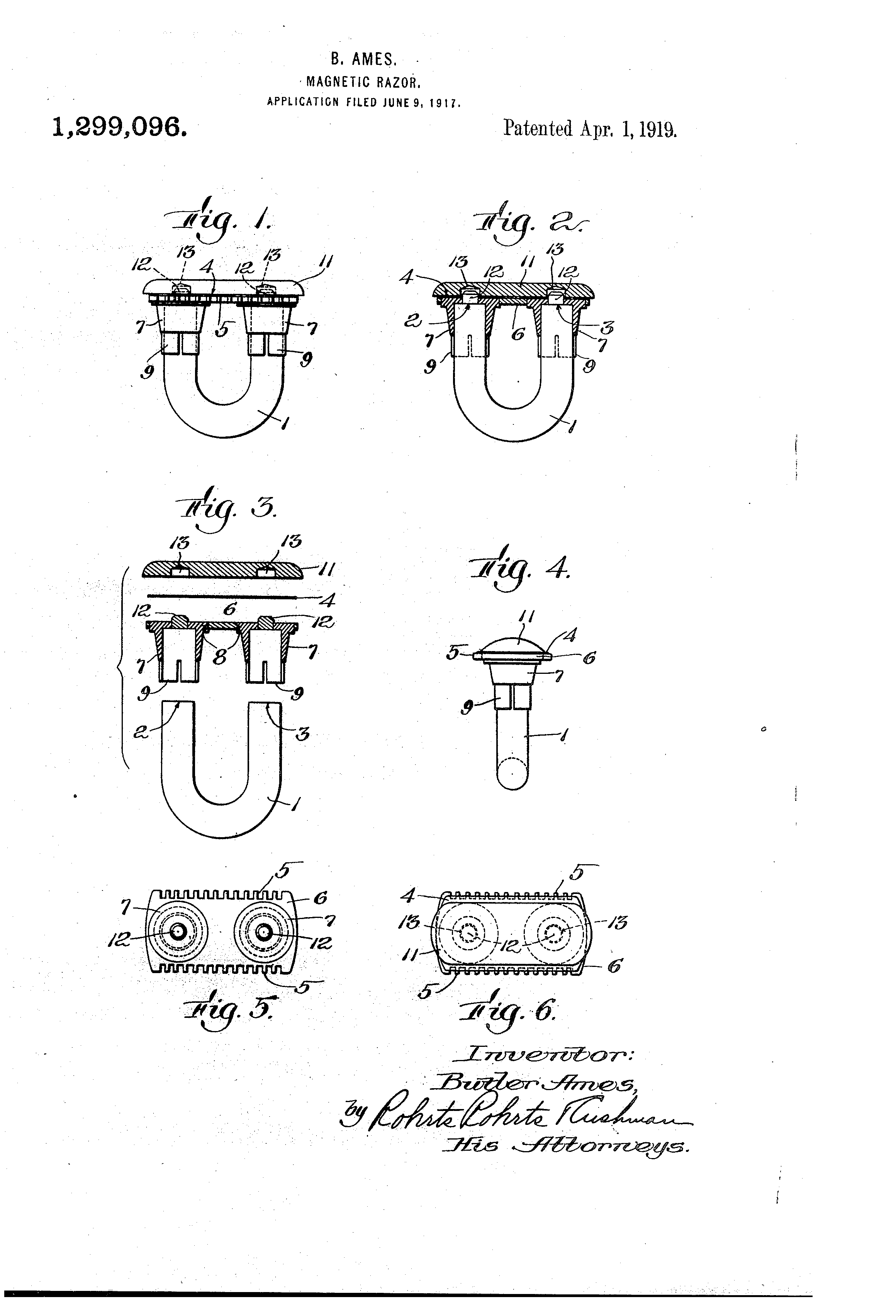 To quote Mr Ames from his patent description:

Another cardinal feature of the invention comprises means for rigidly mounting the guard member 6 upon the magnet 1 and at the same time permitting the ready withdrawal of the of the guard member and mounting means from the magnet. The preferred embodiment of the mounting means, according o the present invention, comprises pole pieces 7 adapted to fit over the ends of the as shown in steel or other magnetic material.

But Mr Ames ingenuity hadn’t run dry with two different ways of attaching the magnet to the razor – so he filed a third patent at the same time. This one was intended to make it more difficult for the razor head to tilt on the handle. 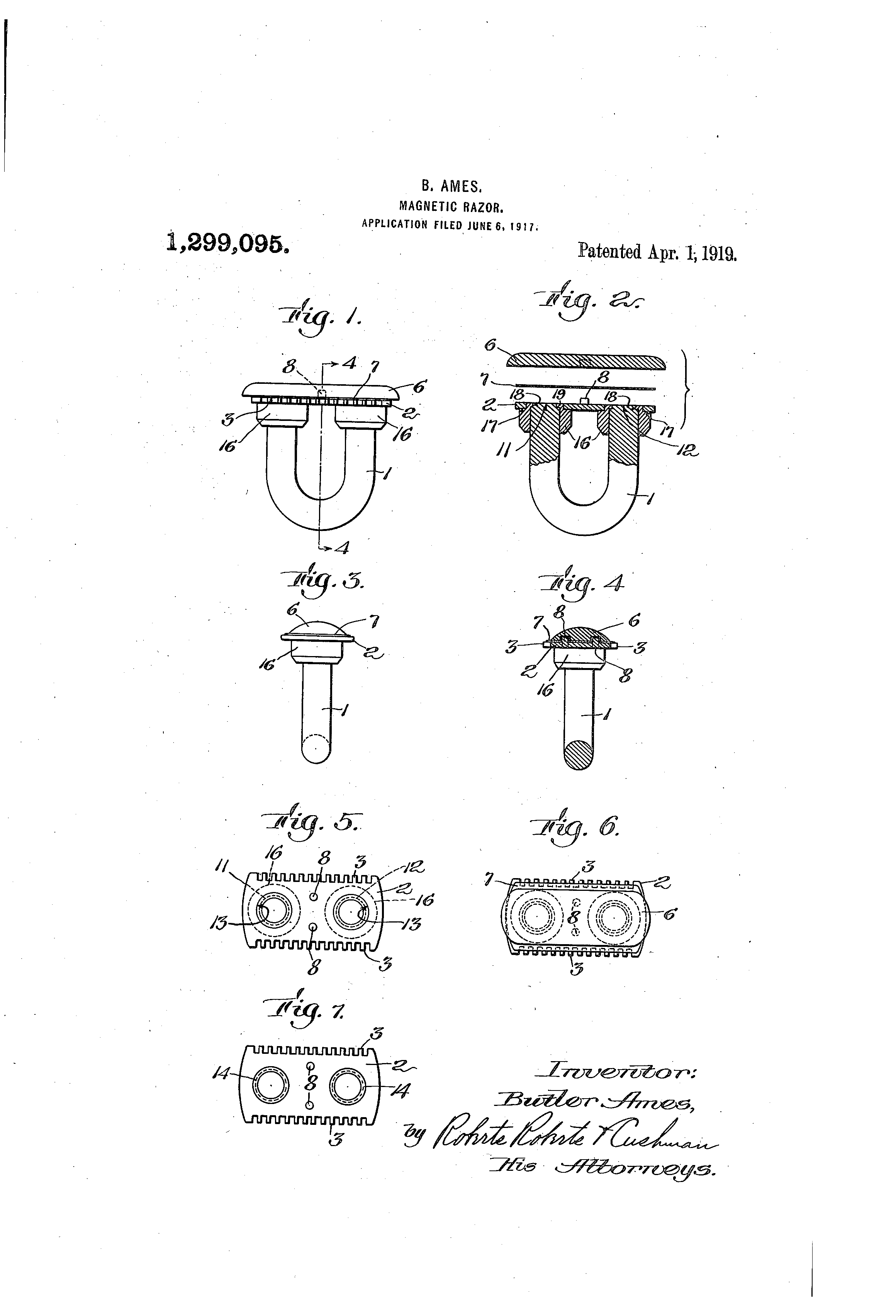 To describe this iteration in Mr Ames’ own words;

In the present embodiment of my invention the base or guard member is preferably formed of steel, and as this is a magnetic material I preferably provide means for preventing magnetic flux being shunted from the cap member through the base member, inasmuch as the attraction exerted upon the cap member by the magnet is decreased in proportion to the amount of flux shunted from the cap member. For this purpose I provide bushings of non-magnetic material between the poles of the’magnet and the of collars 16, these collars also serving an– other useful purpose, as will now be described.
In using the device there is a certain amount of pressure exerted on the edges of the guard member which tends to tip it about the central axis of the poles 11 and 12.,
By forming the collars 16 of considerable thickness, bearing surfaces 17 may be provided at their upper ends upon which the guard member may rest throughout a considerable area. Owing to this considerable area and owing to the fact that it extends well out toward the edges of the guard member, the guard member when positioned thereupon is rigidly held in position.

For being a trio of patents covering magnetic razors, the patents Mr Ames applied for and received are blissfully free of woo-woo. No mention of magically keeping the blade sharp, no claims to make better shaves, no rambling of magnetism making the hairs easier to cut or nothing like that… just using magnets to keep the razor together.
Mr Ames took a fourth patent in 1919, that built on his magnetic razor patents; a “new and useful improvements in packages of razor parts”. 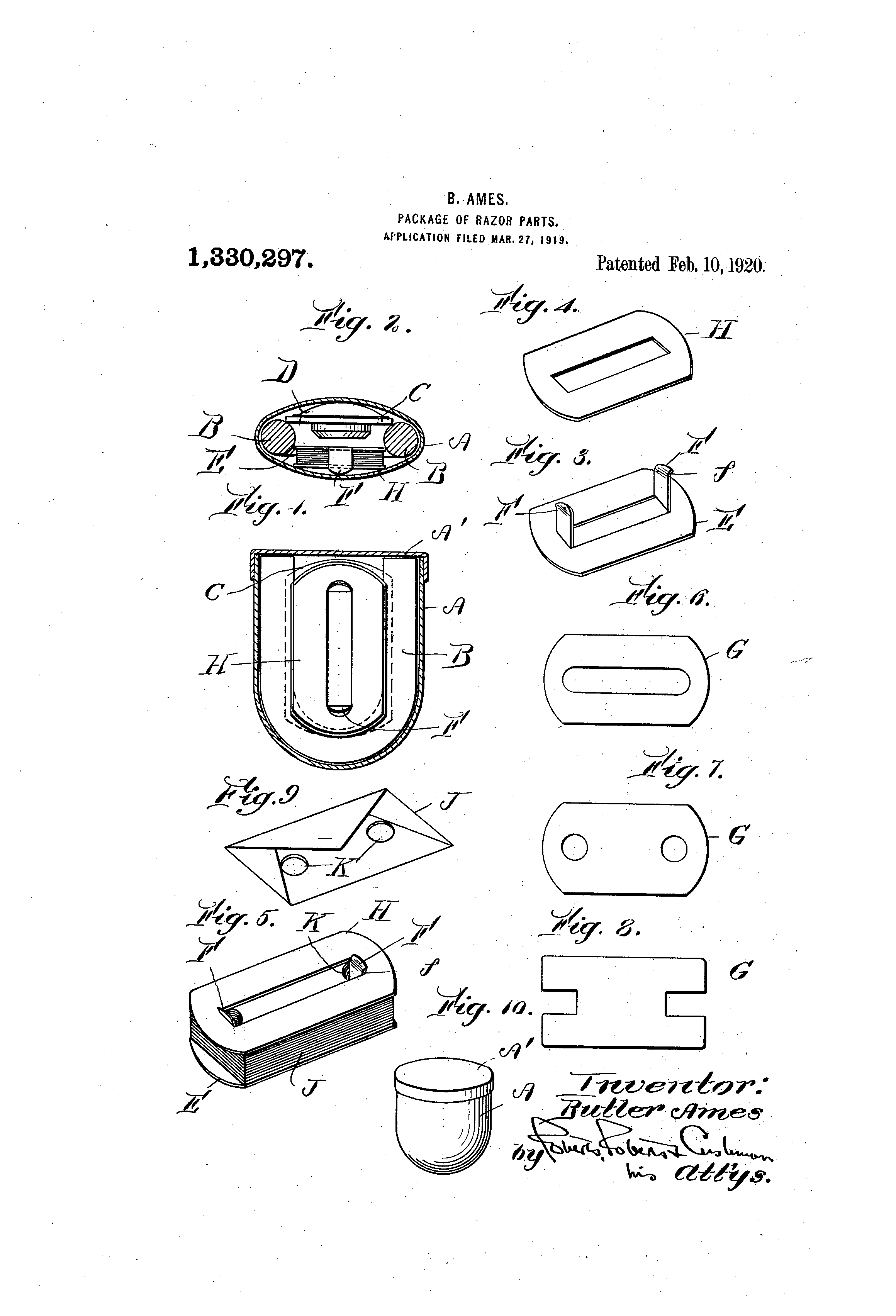 Basically a way to pack one of his magnetic razors along with a stack of blades in a small, specially shaped tin. Or as the more verbose patent description states it:

It is the principal object of this invention to provide for the package of disassembled razor parts in small, light and very. compact compass, in such shape as to facilitate packing or carriage on the person under any and all conditions of service. It’is a further object of the invention to provide’ in the package as art thereof, a blade package adapted to facilitate the compact packing of a plurality of blades and to protect their cutting edge or edges until such time as they are successively removed for use.

It would have made a wonderful and compact travel razor kit to be sure – just one I would keep well away from anything that magnetism may affect.

Mr Ames patented a fair number of other things too; magnetic cores, lamps, distilling apparatuses, a reciprocating apparatus… but as far as I can tell he dabbled no further in razors.