Used razor blades are still razor sharp, and disposing of them shouldn’t be done carelessly. Some shavers live in old houses where they have a slot in the medical cabinet which will let them drop used blades down between the studs (which will cause a hazard for the wrecking crew years or decades from now), some spend cash on designer blade banks or make a bit of DIY from old tins. A lot of shavers use old pill bottles, like I have done until now – which will have to be sealed, marked and disposed of when it’s full.

Having filled up the third pill bottle in about six years, I decided a better solution was needed: 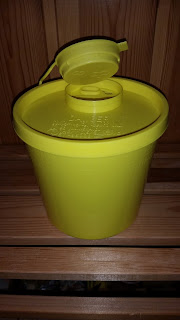 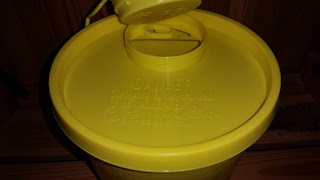 Often referred to as a “sharps container”, variations is available for cheap at your local pharmacy or medical supply store. While the tub is ugly, it’s also sturdy, near unable to open once it’s sealed, big enough for years and years of shaving and can be handed in for safe disposal later.

Overkill? Perhaps – but better safe than sorry, and unlike an old pill bottle or a slot in the wall it wont cause a nasty surprise for someone else down the line.

1 thought on “My new blade bank”