Over on Paleofuture (a fun blog I recommend by the way) I stumbled over a electric razor (and face massager) from 1926:

Allegedly the vibrating blade should overcome the “pulling effect that an ordinary razor blade has on the beard” – not that I’ve noticed any tugging since I switched to traditional razors – but what I found most interesting is the way the back-and-forth movement of a solenoid is turned into a side-to-side movement by a clever linkage.

The device was claimed to be “entirely water-proof” and “practically free from troubles of all kinds”, hopefully the later included the kind of trouble you could get if the handle wasn’t as water-proof as claimed… this US manufactured wonder-razor was supposed to be hooked into the light-fixture for that 110VAC 60Hz goodness.

As an added bonus you could take the razor head off and substitute a massage arm, allowing you to use the device for facial and scalp massaging. According to the ads, men as well as women had “discovered the satisfaction of using the Vibro-Shave Electric Safety Razor.”… 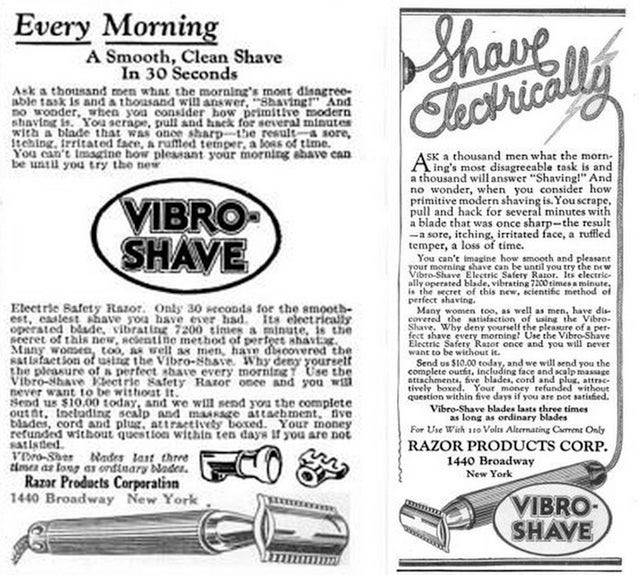 According to a website I stumbled over, the Vibro-Shave electric razor was manufactured by the Electric (Safety) Razor Corp., which was located in Long Island City (NY, USA), in the later half of the 1920s. Same site claims there should still be many Vibro-Shave razors on the market, although a quick search didn’t reveal much more than one: 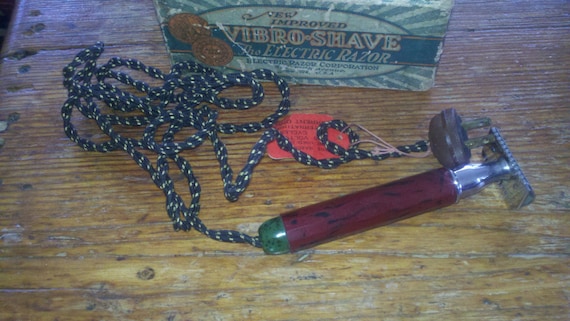 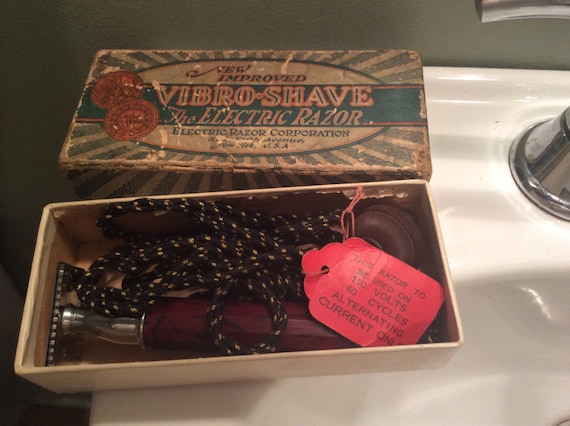 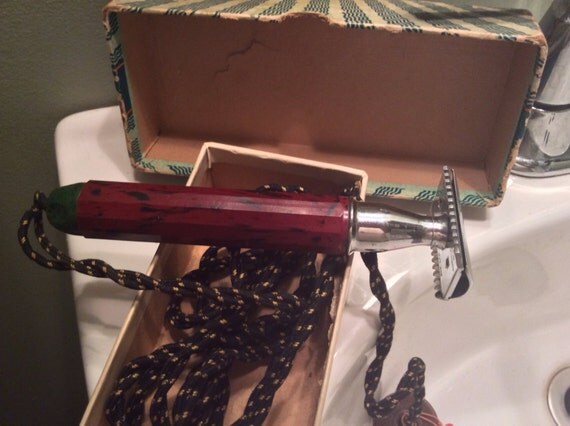 A bit of digging revealed that the patent was filed in 1924 by Mr Saul Shaler, and has long since expired. The patent drawing is pretty nice though, and does a good job of explaing the lever arrangement that allowed the solenoid to drive the blade. 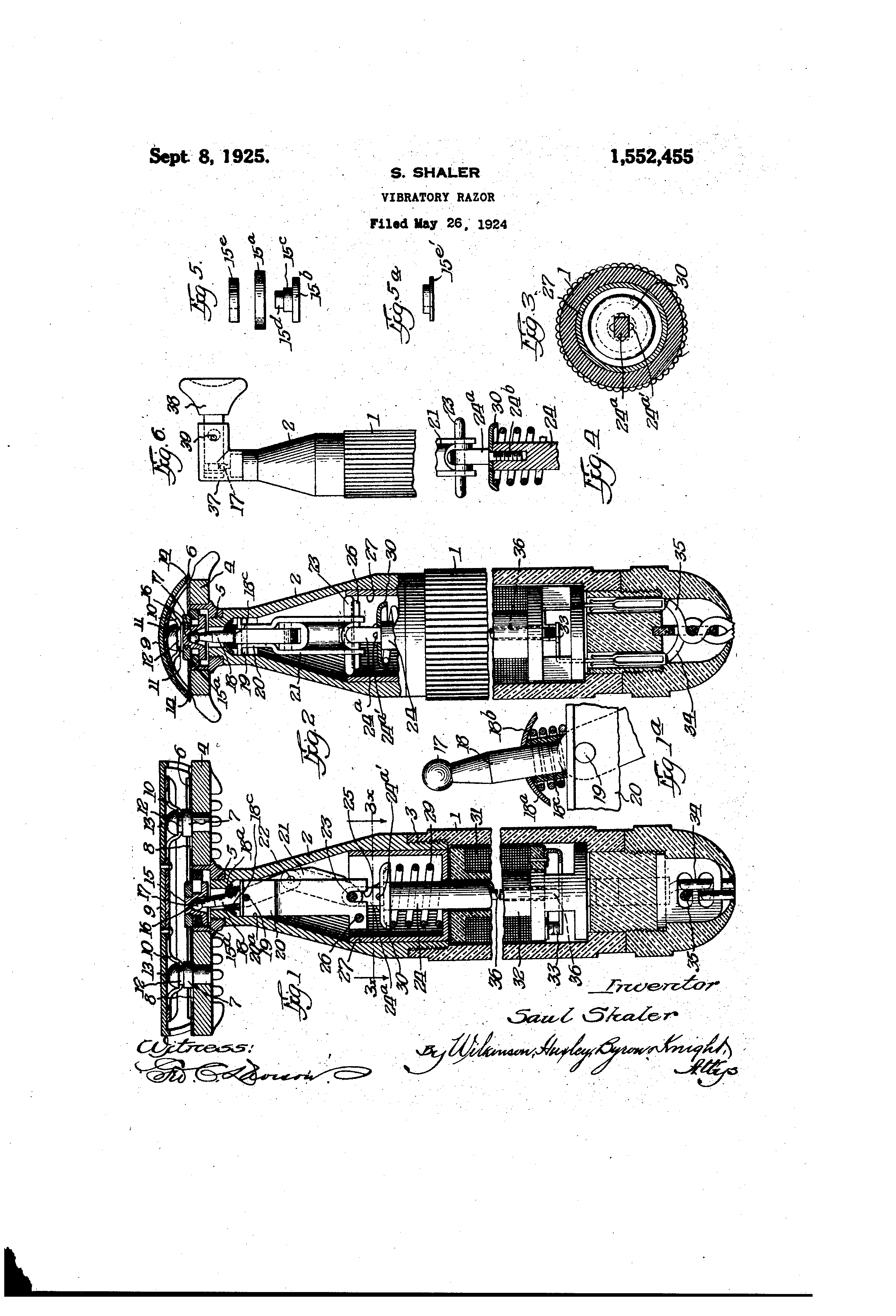 The 1924 patent was an improvement (according to Mr Shaler) on a 1923 patent, mostly in the construction of the handle. The Original 1923 patent also includes a drawing of the facial massager. 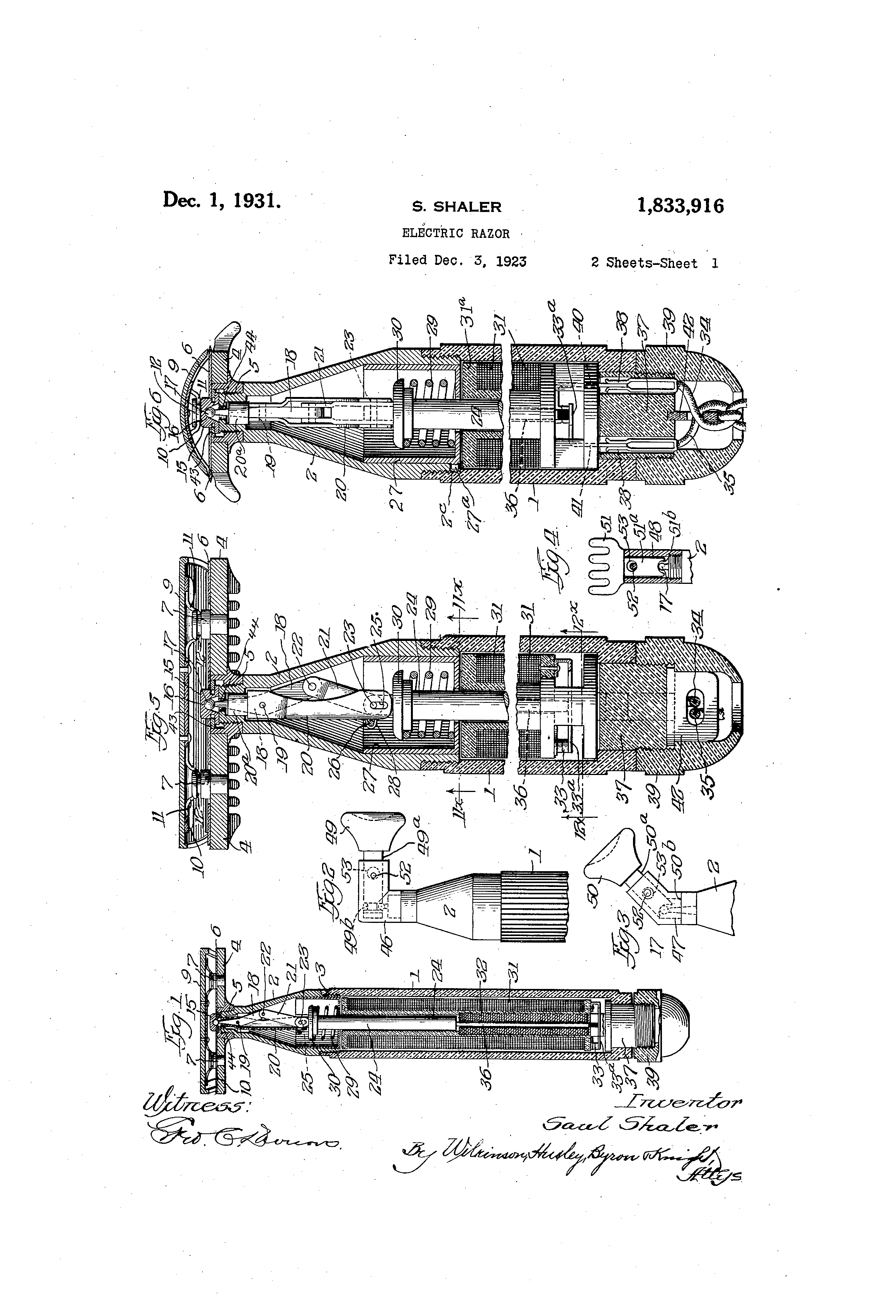 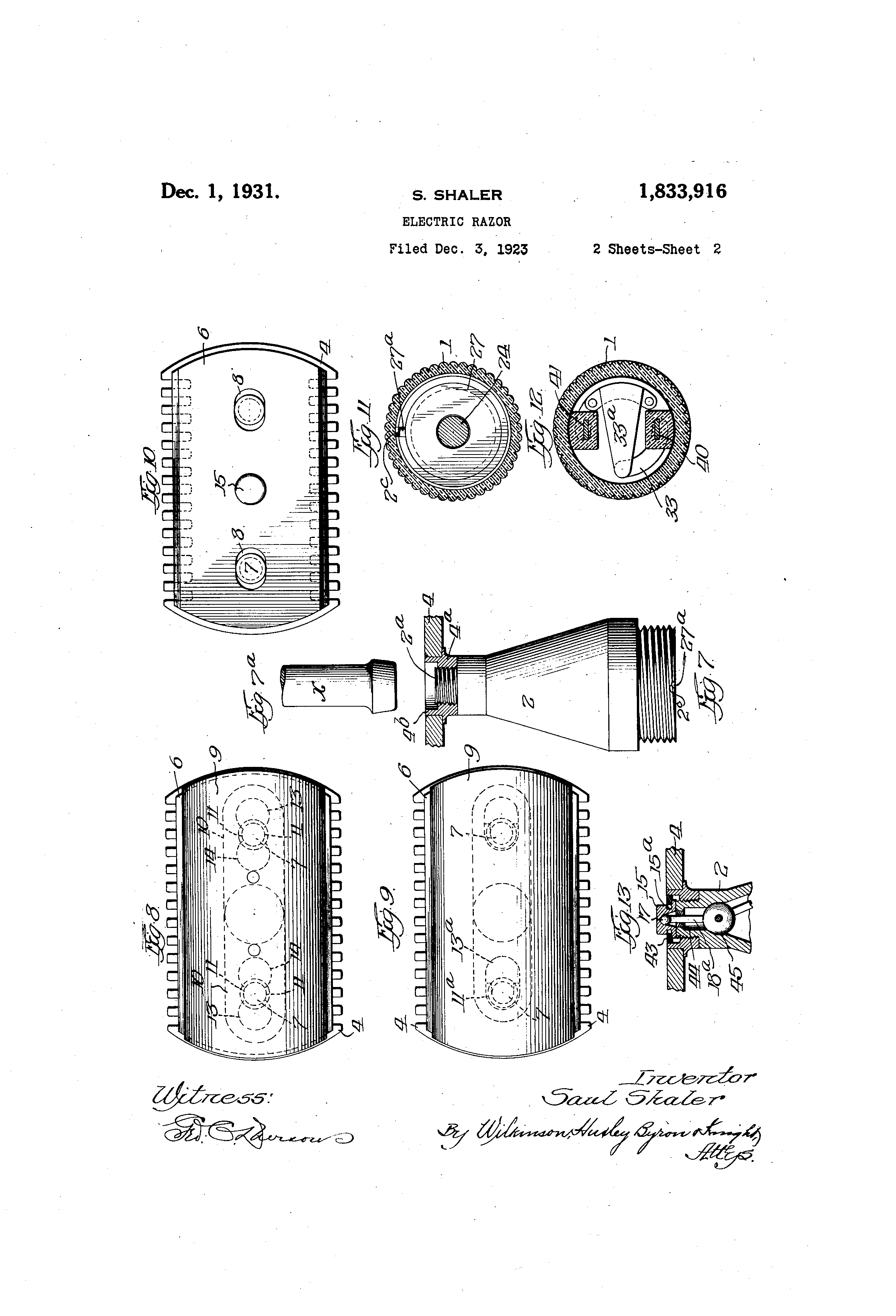 Mr Shaler was also granted a patent on an improvement on his Vibro-Shaver in 1929 – in other words towards the end of production – covering an improvement in the razor head. 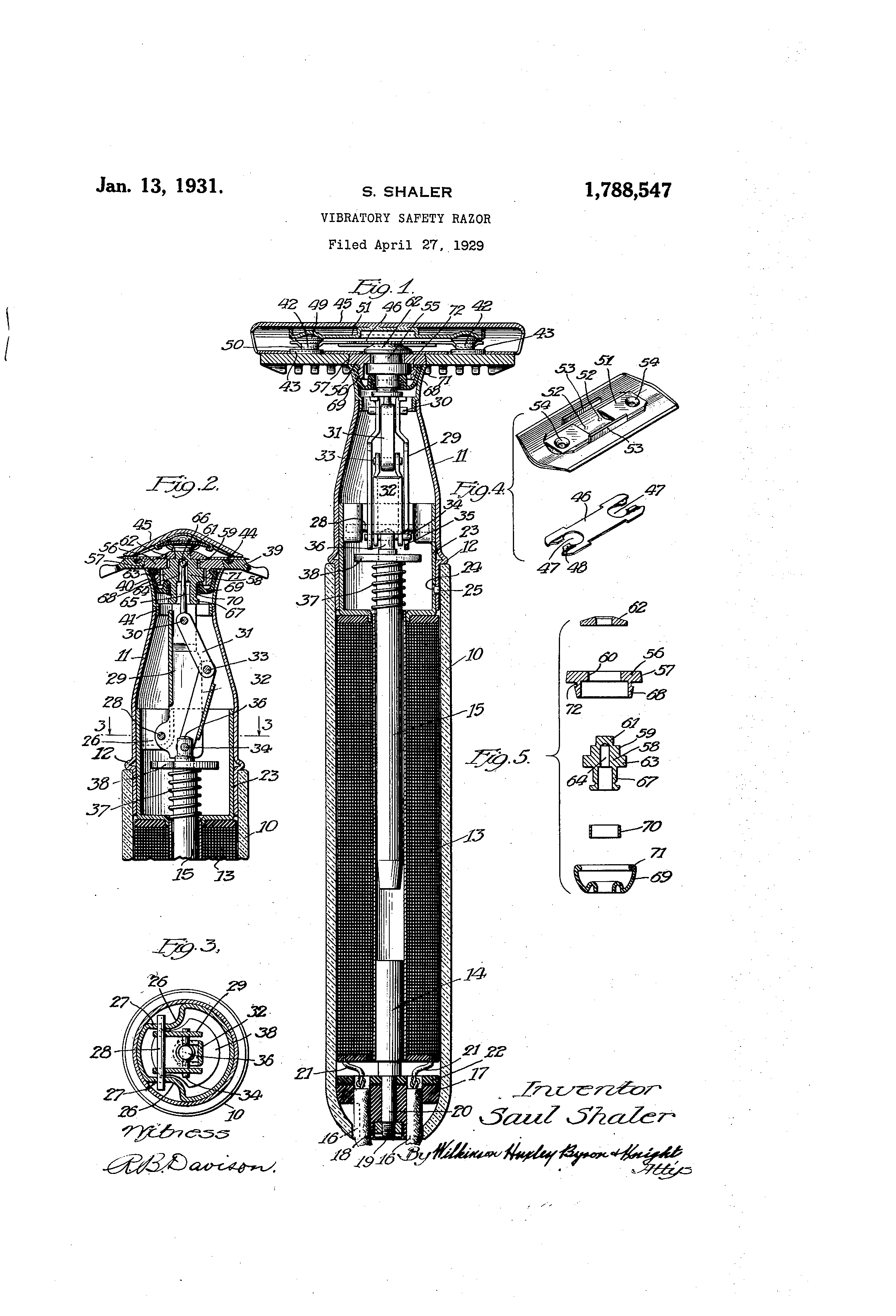 Taken together these three patents offers a fascinating glimpse into the development of this largely forgotten razor and/or electrical hazard.

2 thoughts on “A possible shocking shave”