Back in 1917, the shaving brush anthrax scare was in full bloom. This may explain why Mr John T Cooney took it upon himself to invent and patent a sanitary, disposable shaving brush.

It is the principal object of this invention to provide a shaving brush which will fully answer the purpose of such brushes in all general respects, yet which may be produced at such a low cost as to make it possible to discard the brush after a’single using thereof, thus making for increased sanitation in barber shops and similar-establishments, where, ordinarily, a brush is used repeatedly for different customers.

Even without the anthrax, it don’t actually sound like a bad idea – the sanitary standards were not on the level we’re used to today, and brushes made from natural materials usually don’t respond well to  repeated visits to an auto-clave or baths in high test barbicide (which by the way was invented much later).
A number of steps were taken to ensure brushes that were cheap, easy to use, attractive for a barber, and yet of a decent enough quality:

The invention further contemplates facilitating the production of a lather by impregnating the brush portion in a suitable soap solution during the course of manufacture so that it is only necessary to dip the brush in water and then apply to the face.

The inventive idea involved is capable of receiving a variety of mechanical express believed to be a preferred form of the invention which consists of a plurality of strands of fibrous material bunched together and bound intermediate the ends thereof with a suitable wire or cord which is drawn tightly so as to assist in maintaining the ends’of the strands together and in even relation. In order to provide a rigid handle for the brush the strands, after being bound together by the cord or wire, are given a torsional twist as indicated and the strands are then bent upon themselves or doubled and the doubled portion thereof is bound by a cord or wire adjacent to the intermediate portions of the strands, thus forming the handle. The ends of the strands are brought together by the doubling thereof to form the brush portion.

Since the present brush, when completed, consists of a plurality of the strands which are each continuous and unbroken, both ends of each strand are presented to act in the forming of lather on the face of the user; and since the several strands are doubled and bound together at two points, the tendency toward shedding of the strands from the brush during use is reduced to a minimum. 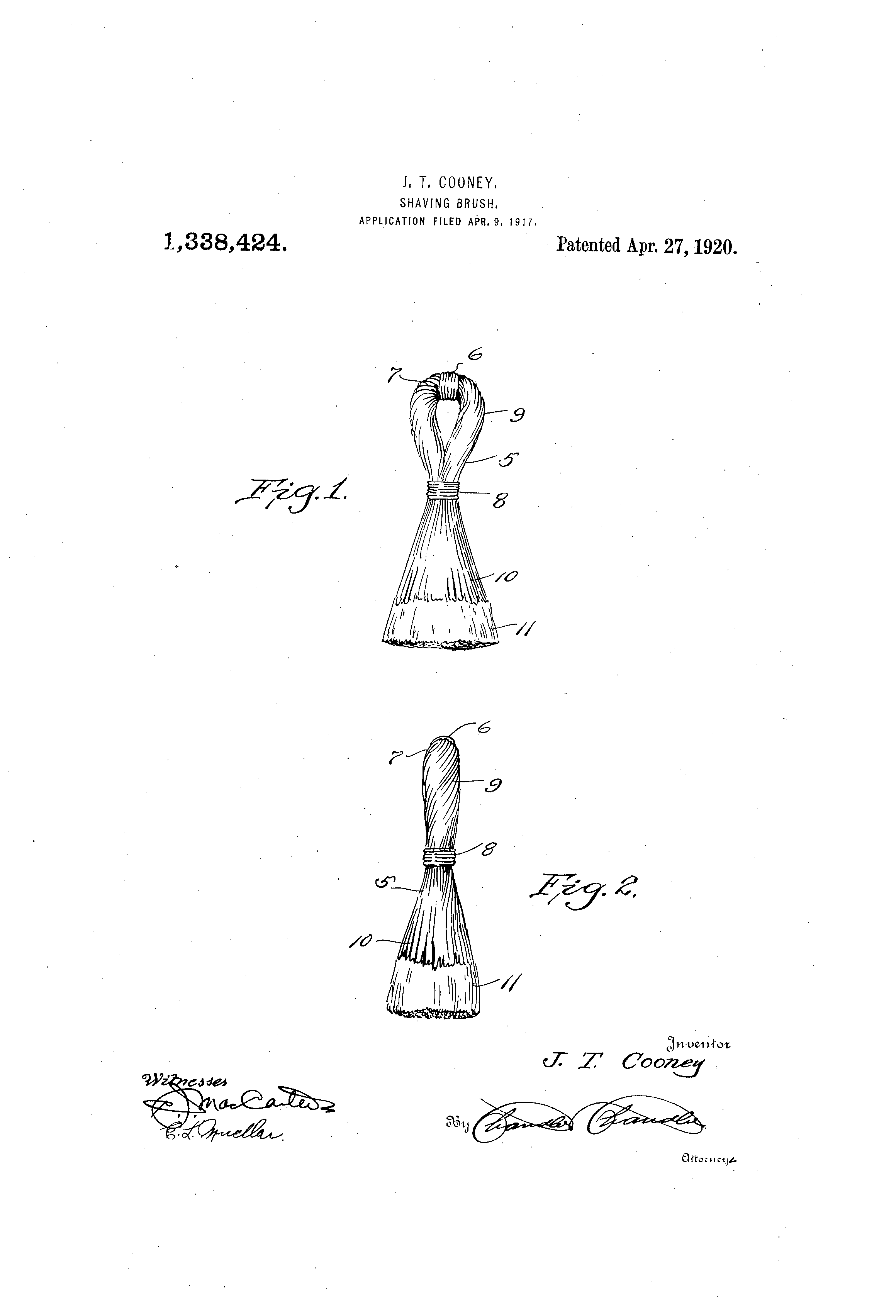 Overall not a bad idea at all, in my opinion. The end of the anthrax scare probably knocked the bottom out of the market though, even though the basic idea would also make for a nice semi-disposable travel brush.