Another of those previously unknown to me products from webshops in the far corners of the world… Derby Lavender Shave Cream at least is from a slightly more familiar brand – if by familiar you mean “have heard of before”. It is somewhat easier to find than the Dalan Cream I talked about previously, hence somewhat easier to find reviews online… but the two products are rather similar.

Overall the Derby makes an average lather, perhaps a bit above. It performs better than my glycerine soaps, but less so than my tallow pucks. It has a distinct lavender scent to it, and although it fades quickly it should last you for a three pass shave. 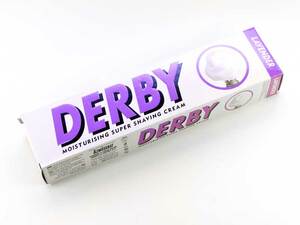 Decent slip and cushion, and okay as far as moisturising goes. Like most creams it’s really easy to whip up copious amounts of lather, and it don’t collapse between passes either. It’s a thirsty cream though, so for once the solution to any lather issues is to add more water, not more cream.

Overall a good choice if you want a cream and don’t want to spend too much – something for the traveller on a budget perhaps, or for your back-up den?