At times I do things for reasons that can be described as ‘less sane’ – like picking up a sleeve of razor blades I’ve never heard about before just because I like the name. Sometimes it even works out…

I was over at Shave A Buck, ordering one of the new Cadet Razors (the Twist To Open TTO-13, which is a damn fine razor by the way) when I spotted a couple of blades I knew I had to pick up just because of their names; Lord Cool and Flying Eagle. While I haven’t tried the former yet, the later is actually surprisingly good blades.

More about that later, first we got to have pictures: 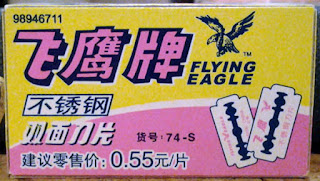 The front of the cardboard sleeve – and no, I have no idea what it actually says. 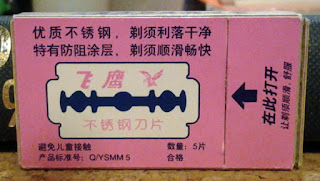 Back of the sleeve – all I can figure out from it is where to open the damn thing. 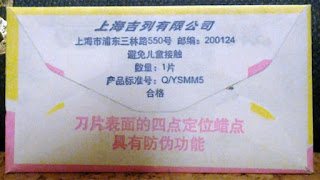 The blade unwrapped – unlike some more expensive blades, the Flying Eagle is double wrapped. 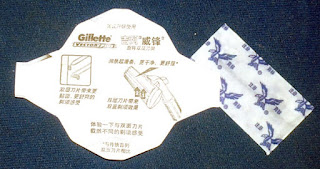 The inside of the wrapper, and the surprise of the day – an advertisement for a cartridge razor called the Gillette Vector! 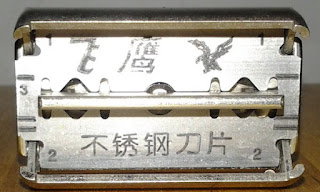 One side of the Flying Eagle blade – mounted in my Gillette 58 TV Special. 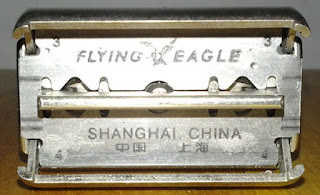 The other side of the blade – for us white barbarians who don’t read Chinese I guess.
The Flying Eagle gives me – at least in my Gillette 58 TV Special and my Merkur 25C OC – a very good shave. It’s sharp and smooth, and stays that way; it actually stays good for longer than my current fall back blade – even if it starts out slightly less sharp that is a trade off worth considering.
YMMV as always, but I think everyone who likes to experiment with blades that are from outside the beaten track should give these a go – for less than 2 bucks for five they are reasonable priced, and they might give you as good an experience as they gave me.
As an offside, the Gillette Vector mentioned in the advertisement seems to be a Far East clone / remake of the Gillette Sensor; pivoting head, two blades, lubrication strip and ‘micro fins’.