I have to admit that I like TTO razors; not only do they represent a neat little bit of mechanical ingenuity but they are easy to load with a fresh blade. So when a new player came onto the scene with a range of TTO and three piece razors, I put one on my wish list.

The one I picked was the TTO-13, available from Shave A Buck for a little under 25$. I couldn’t not avoid the temptation of ordering a few more things though… so my total was a bit higher. 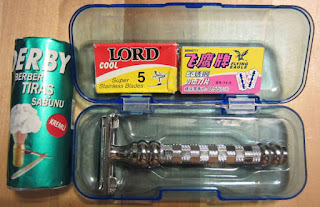 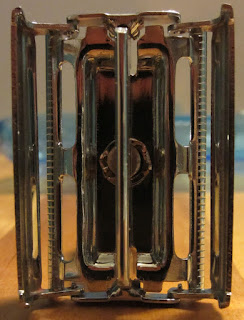 The Cadet TTO-13 arrived in a decent blue plastic box, just as their three piece TP-01 Open Comb did. The craftsmanship is excellent, even more so when you consider the low price, and the fit and function is close to flawless. It’s worth nothing that you twist the whole handle to open the doors on the Cadet TTOs, not just the know on the bottom. In that regard it is similar to my Parker 22R, and unlike my Gillette TV Special. What you prefer might vary – I’m fine with both systems.

The first thing you’ll notice when you pick up the TTO-13 is that it’s a hefty piece of metal. It’s heavier than my Parker 22R, a razor some people are already claoming as being too massive. However the balance on the Cadet is excellent, with the CG being just below the ‘double ball’ on the handle.

The handle itself is comfortable to hold, and the machined chequerboard pattern makes it near impossible for it so slip even with wet and soapy fingers. It’s a quite long handle, so if all you’re used to are short handled razor it might take a while getting used to – on my hand I seem to prefer the longer handled razors, so to me the length was a plus.

The head itself is – as mentioned – well made and functions smoothly, and loading a blade is so easy a child could do it. It is worth noting that the Cadet TTO head has a flatter blade angle and a larger blade gap than either my Parker or my Gillette TTO have. This gives a more aggressive shave, and means it’s less forgiving to errors in the shave angle. It also means that you can get a potentially closer shave – however that also depends on the blade you’re using.

The Cadet TTO-13 shaves very well, and I can thoroughly recommend it to anyone who are in the marked for a long handled, hefty TTO razor.