Caveat lector: The Lea shave stick have – as far as I can tell from searching – gone through a couple of reformulations over the last couple of years. Mine is the “middle” formulation, without tallow. Older and newer stick should – again as far as I know – contain tallow.

I picked up the Lea shave stick on a whim, and for being cheap – a touch under 3USD from Shave A Buck – it’s a reasonable decent stick. Not quite as good as the Arko – which can be had for less if you know where to look – but the Lea have the benefit of coming in it’s own plastic carrier; very handy for the Gobag. 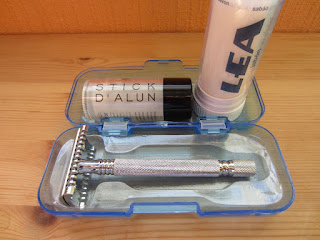 As far as the scent goes, it smells of soap and nothing more. That’s not a bad thing, even less so when you plan on sticking it in your toiletry bag and leave it there – it wont stink up your other gear. It smells a little bit stronger when wet, but again only of soap as far as I can tell. Compared to a fresh Arko, it’s very mild – compared to a slightly aged and aired out Arko it’s much the same.

My Better Half claims it smells as if Irish Spring and Dove had a baby – it does remind me of Dove as well, but I’ve yet to smell the former.She haven’t been exposed to Irish Spring in a decade though, so take that for what it’s worth.

The lather is quick to whip up and plentiful, and it provides okay glide and cushion. Not the best I’ve experienced – that honour goes to Mike’s Natural Soaps – but far from bad. In my experience it does collapse fairly quickly, which may or may not be an issue of you do three passes – I find it’s sufficient for two. 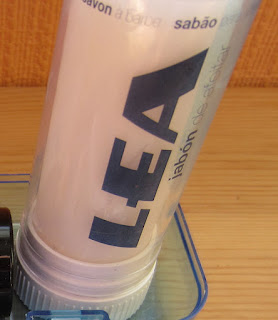 The lack of tallow may give some issues if you got dry skin, but since I always uses a moisturiser after shaving it’s a non-issue for me. The newest reformulation – which do have tallow in it – is bound to be better in that regard, even if it seems to be somewhat more expensive online. I have no idea what the latest refomulation is like in regards to scent or lather though, but reviews seems to be positive.

Overall it’s a great little package; a sturdy container, a good soap and a low price. Definitely recommended if you want a shaving stick for travel or for use at home – you may want to look for the latest reformulation if you want a tallow based stick though. For me it has displaced the tube of shave cream in my GoBag, taking up less space with less chance of making a mess.