As far as I can tell these two brushes have a pretty similar knot and handles much the same, so I’ll treat them as one for the purpose of this short review. As I’ll touch upon later, the differences in behaviour between two of the same model is likely to be as big as the differences between the two models.

Brushes can be expensive, especially if you gotten into badger territory. On the other hand, brushes can be cheap without being bad – if you’re willing to take a change on something different. Bestshave.net in offers two horse hair brushes hovering around 2.50 USD which have gathered quite a following around the world – the imaginatively named No6 and No7. The former has a wooden handle and is the slightly cheaper of the two, the later comes with a plastic handle that will set you back another dime. 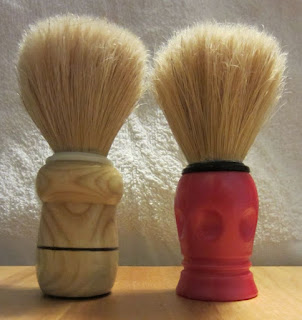 As mentioned briefly, the two brushes shares a pretty similar knot as far as I can tell. Both brushes have a loft that is 50 mm above the handle, and they are about equally thick at the base. Bestshave.net lists that the knot measures about 25 mm on the No6 and about 20 mm on the No7 at the base – however, the No6 have undergone a redesign since I bought mine which probably explains the difference.

The knots are fairly densely packed, but not overly so – giving them a bit of spring and flex. Be warned though; a quick look online indicates that both brushes suffers from some QA issues – in short the quality varies wildly – even if comments seems to point to this issue slowly getting resolved; the No6 is now offered along with the reassurance that “Now, more quality, and aesthetics“. There also seems to be some discussion around the web as to the nature of the hair used for the No7; some say it’s boar but most seems to agree that it is indeed horse. Could be a case of using what hair you got laying around I guess – these are cheap and cheerful brushes.

Getting down to the basics; are they any good? Can a brush costing about one cup of coffee work well?

In short, yes. They both work great – good backbone, good flow, little to no scratching… in short, everything a brush should be in my opinion. They both smelled a bit of horse the first few times I used them, but frankly that isn’t a bad smell. To top it off the balance is good too, with the centre of gravity on a loaded brush about where the handle and knot meet, and both No6 and No7 offers a reasonable comfortable grip. So far both have been able to whip any soap I tried into a smooth, creamy lather – both in a bowl and on my face. The slightly larger No6 holds more lather but the slimmer No7 can hold plenty enough for two and even three passes – even with my spotty technique. 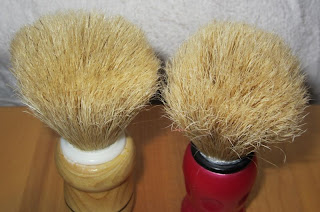 The Turkish No6 and No7 would be an excellent first brush for a newbie not wanting to spend much money on a new hobby. They would also be a good “first horse” for more experienced shavers who wants to try something new. No7, with the plastic handle, could be a great brush for travel – one you won’t be heartbroken over if you forget in a hotel. Or you could simply get one just for the fun of it – letting you get one more brush in your rotation without laying out more money than you would for a cup of coffee. Overall I would rate the No6 with it’s wooden handle higher – not only do you save a whooping ten cents, but the handle looks better and fits my hand better than the slimmer plastic of the No7.

I must however temper my recommendation with a warning: These are brushes costing about 2.50 USD, manufactured in a place where quality control is spotty as best. Your Mileage May Vary… as always. But can you afford not to try one of these brushes?